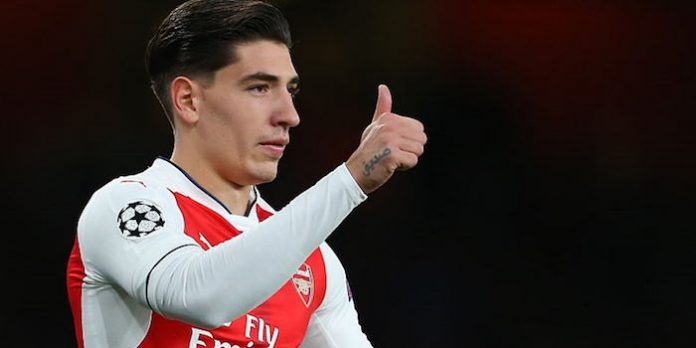 Arseblog News understands that Hector Bellerin has put pen to paper on a new Arsenal deal.

The exciting Spaniard has been one of the team’s most consistent players, and his rise to one of the top performers in the Premier League has seen the club move to tie him down on new and improved terms.

Although he still had three years left on a deal signed in 2015, the new deal is a reward for his growing stature, and to further ward off interest from the likes of Barcelona and Manchester City.

Pep Guardiola did make an approach to Arsenal during the summer but was told in no uncertain terms that Bellerin was not for sale.

The 21 year old spoke last week about his future, saying, “I’m not in a rush to extend the contract. I’m happy. I’m comfortable. I want to be here a long time.”

However, our information is that the deal is agreed and signed, we just await official confirmation.

So, one down. Just the small matter of a brilliant German and an energetic Chilean to sort out now.

How is it that a 21 year old is one of the most professional guys in the team, if not the league. Love everything about Hector, onwards and upwards

JB
Reply to  the american

Just as fast as he runs, he signed it..

A Different George
Reply to  Gooneron

No one can write that fast.

JustAGooner
Reply to  A Different George

A part of me is hoping that the lack of an official announcement means we’re waiting for some more big news to go with it.

Our very own Superboy will become Superman in the Red and White. Fantastic news!

And the magical spaniard too.

great news! I still think Ozil will sign because he has lots of German friends on the team. Sanchez is the one I am nervous about, you can’t really get a read on the guy.

Couldn’t have worded that better myself mate. And I won’t try. Have a green thumb

It’s because Alexis isn’t funnelling a stream of endless shit into the media machine. If he feels we can win something, he’ll sign.

Alexis looks pretty happy this season. Moving him to CF has reinvigorated our entire front line. Alexis didn’t look too great there last season when we tried it, so for the manager to attempt it again after a poor showing against Liverpool showed real balls. I said it so many times last season: Alexis is a CF and has been a sensational CF for Chile. That argument is firmly dead now. My money would be on him and Ozil signing new deals pretty soonish. They are playing with great players, have the full support of the manager, are paid very… Read more »

Very nice me old cockneyed Spaniard.:D NO more Fabregas defective DNA. How quickly they got rid of their own. One thing regarding the Ericksen free kick that hit our post (and in a sense the Ludogerets goal), I’m not sure why we do not put someone on the far post for those sort of dangerous whipped in crosses from set pieces. The ref (as in the case of the excellent Wimmer goal) seems hardly likely to blow for an offside so why take the risk? Put someone on the far post in the event the keeper (be it Ospina or… Read more »

The BFG
Reply to  santori

We use Zonal marking for some reason and back post is neglected no matter how many times it is exploited.

neder
Reply to  The BFG

Besides the offside trap, man marking invariably leads to grappling as opposed to actually playing the ball.. just have a listen to mark Hughes on the defensive woes that stoke had earlier in the season when he explained that referees are (finally) clamping down on that particular issue and the problems it gave his defence, and in particular that cuntbag of a leg snapper shawcross.

Offside trap. Normally in those kind of free kicks the defensive line sits just along the penalty box. It’s the most ideal position to defend the free kick, set an offside trap, and if the ball is played in behind the GK will have it covered (hopefully). Plus, totally wrong thread dude wtf?

Arseblog ‘understands’ eh? I’d say this site understanding transfer news about Arsenal is just about as strong as it gets, amazing news and congrats on the scoop to Arseblog and co!

He has arsenal DNA! What a lad!

BOTH MOnreal and Bellerin were excellent on the day. The technically limited Jenkinson and erratic Gibbs are going to have a hard time dislodging the Spaniards. I’m not sure I also agree with all this nonsense about how Wenger should have rested players. Walcott, Monreal, Bellerin, Iwobi, the Ox – none of them featured heavily in Bulgaria if at all. HOw much rest do you need. Its only NOvember. Some of these players came back in and performed very well. I thought the gaffer tried to put fresh legs and pace to get at Spurs (BC they played a day… Read more »

How much rest do you need?
I don’t know, but after I work a load of days in a row, I like a little time off to recuperate, if only for the mental health of it- and I don’t run on average of 12km during my workday.

What has this to do with the main article?

Jesus. Start your own blog. Nobody wants to read 9 pages of your dribble.

Get your own blog

Excellent timing Arsenal. What a way to lift waning spirits after a dull derby performance. Now to tie down Ozil and Alexis

Perfect piece of Arsenal news before going to bed 🙂

That full sprint tackle against the spuds yesterday was brilliant. It’s becoming one of his trademarks!

I hope, the deal includes an option to clone him. How else can we replace him when he retires!

*and also the matter of a BFG and Spanish wizard

That’s my night made. I love Hector.

Not long ago we lamented the fact that a certain Spaniard left the club under a cloud before he could cement his place as an Arsenal legend.

Now we have three Spaniards in the first time destined for legend status. Love them all.

Brilliant news, Hector is an incredibly mature lad for 21, had to grow up fast moving to London I guess. I have to pinch myself sometimes that we got him for pittance from Barca, or was it free? Either way fuck them!

Great news. 5 years will take him to 26. Hopefully the next one he signs will be just as straightforward.

Imagine the tension then.

Thumbed up every comment, so lively the mood became

Is that you Yoda?

May the force be with Hector!

Bayern signing 4 or 5 of their best players until 2021 early this year, Real Madrid extending with Kroos,Bale,Ronaldo and Modric until 2021/2022. There’s a trend…so far we’ve got Hector – at least two more would be nice (you know who)

Our youngest ever Ledgend 🙂

I doubt Ozil and Sanchez will follow. Little back bone in this team it seems.

The Doff
Reply to  Ex-Priest Tobin

Deduction doesn’t seem to be your strong suit.

Apparently he wasn’t that bothered about the DNA. #redandwhitebellers

Wow
I nearly said this is arguably bigger news than a potential Ozil deal, which probably isn’t true, but Hector is going to be the best RB in the world soon so the prospect of him committing long term is very exciting

This new deal should shut those other teams up. Very happy news 😀

I would like to see Cazorla extend the contract for not less than 3 years. He is still our best player in the central midfield.

Fantastic news. Arsenal fans all know how good Hector is and will be. But the secret is out of the bag now and even pundits from all over the globe rave about how good this kid is. Good to lock him up long term. Possible future captain one day.

Did Ozil assist him in signing the deal?

You also forget to mention a certain French center back who needs to sign da ting.

What about cazorla?? I think he also has to sign a new contract rather rhan leaving on a free next summer