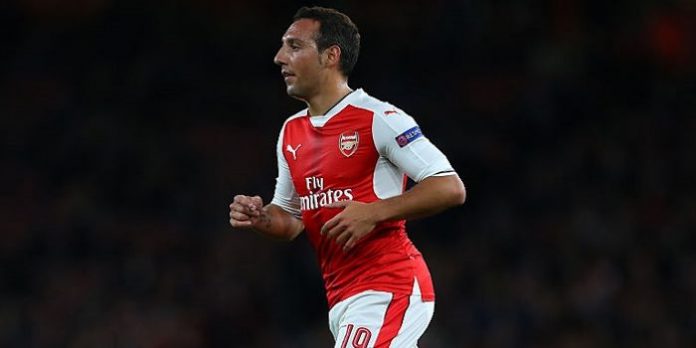 It’s being reported that Santi Cazorla has been sent to Spain for treatment on the current Achilles problem that has kept him out of action since early last month.

The Spanish international took a kick during the 6-0 win over Ludogorets, aggravating a long-standing problem, and hasn’t played since.

Santi Cazorla has been sent to Spain for specialist treatment by Dr Ramon Cugat in an attempt to cure an ongoing Achilles problem. #AFC

Cugat is an orthopaedic surgeon, described by Pep Guardiola as ‘the best doctor in the world’, operating in Barcelona. The Man City manager sent Kevin de Bruyne and Vincent Kompany to him for treatment, and he’s also worked with the likes of Carles Puyol, Cesc Fabregas and Fernando Torres.

Speaking last week, Arsene Wenger admitted he wasn’t sure when Cazorla would be available, and the player himself was vague, saying, “I am trying to return as soon as soon as possible to be with the team again but I cannot say if it will be soon or if I still have a few weeks left.

“That is what I don’t know, but hopefully it will be as soon as possible.”

Fingers crossed this fella can help, a doctor with his own Wikipedia page must be good!

? Come back soon Santi, this team really needs you!

There have been a number of players who, as they’ve got older have picked up more and more recurring, niggling injuries. (Arteta, Rosicky, ljungberg etc.) In some cases it gets to the point where it’s clear they can’t contribute. I really, really hope this isn’t the case with Santi. He’s still at the top of his game, an absolute joy to watch – like no one else I’ve ever seen at the emirates, and contributes so much to the team when he’s on the pitch and off. Get well soon little man. Sorry if I’ve put a downer on it,… Read more »

How you feeling about that decision now Wilshere? Surely the best like for like replacement. Hope he sorts his head out and comes back.

True, we could have done with Wilshire at this moment in time. I don’t see any fit creative midfield players at the moment. Perhaps we should try Ramsey down the middle where he wants to play. Looks like another 4 weeks before see Cazorla play again. Fucking November…

“I don’t see any fit creative midfield players at the moment”- https://www.youtube.com/watch?v=-rnuC38G8N8

Nice clip, but Xhaka didn’t show much of that yesterday… Let’s hope he can produce that in the coming games!

Xhaka may be more technically assured and accurate than Ramsey but Ramsey has him beat for energy, mobility and goal scoring. If our issue is that we’re too conservative in the middle, I’d give Aaron the nod though Wilshere is the closest we have to a like-for-like replacement for Cazorla

There wasn’t any creativity against Man U. It was pretty clear. Probably see him against PSG.

The difference is space. Xahaka needs a bit more space to play his passes which he won’t get a lot in England and not so good with tight spaces. Santi is superb in both.

Too many forget we don’t win all the games with Santi… Liverpool anyone?

Make mine a Swiss miss
Reply to  Alex

A fair enough point of course. But it’s also fair that we’ve missed his creativity at times in some recent games. Get him back and we’ll be a stronger team to me. Better able to hurt the opposition.

Fair point regarding the first half of your comment, but as for the Liverpool game- we were 4-1 down until he came on, changed the momentum of the game and made it 4-3.

I’m running out of fingers to cross…

Think Christmas would be well too early for that sort of injury. Massive hope he’s back fairly early in new year

With his long absence last season, one would have expected the coach to be cautious with him and not make him play 90 mins 3 times in a week. You don’t need to be a tactical genius to know this, should be basic knowledge.

which 3 games are you referring to chief?

A doctor having his own wiki page isn’t a sure sign that he’s good – Dr. Nick from The Simpsons has a page, for example.