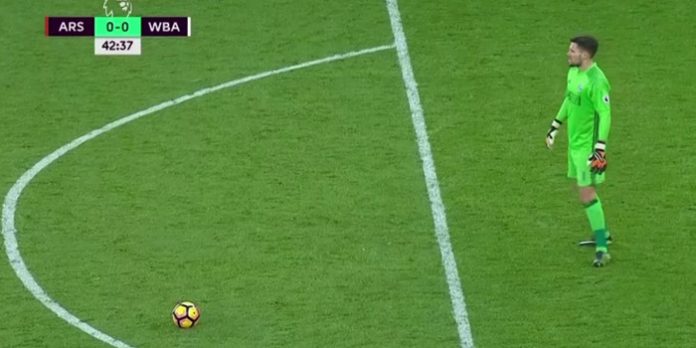 *This set of stats needs the game-state data to go along with it but I don’t have that data. I do know that Arsenal have scored first in 13 matches, allowed the opposition to score first 3 times, and have been held scoreless twice. In the three matches where the opposition scored first, Arsenal won 2 and drew 1. Meaning that Arsenal have come from behind in every match that they went down first in. But it does look like Tottenham and Liverpool fade hard in games and that Arsenal tend to apply a lot more pressure at the end of games. It also looks like Mourinho’s Man U turn into a bunch of goblins in the final 15 minutes running around kicking people, either to try to win or to stop from losing.

7 – Chances created by Mesut Özil (most of the season, he is averaging 2.6 key passes per game this season)
3 – Chances created by Kieran Gibbs
74 – Attacking third passes by Mesut Ozil today
62 – Number of passes Özil is averaging per game this season (on all areas of the pitch, 2nd most behind Cazorla)
142 – Passes by Granit Xhaka today (led all players)
43 – Passes attempted by West Brom goalkeeper Ben Foster, which led West Brom and was 11 more attempted passes than Darren Fletcher, 2nd on the team
15 – Completed passes by Ben Foster, though that counts all those little nodded on headers that Arsenal claimed which explains why…
58 – Arsenal had 58 ball recoveries compared to West Brom’s 47 and why…
16 – Koscielny led all players with 16 ball recoveries
16 – Arsenal won more tackles than West Brom (13) which I just throw out there because I love when we have 60% of the possession and also win more tackles
5 – Coquelin won 5/7 tackles
4 – Koscielny won 4/4 tackles
5 – Koscielny also led Arsenal with 5 interceptions (Yacob Smirnob led all players with 6)
5 – Koscielny also led Arsenal with 5 clearances
5 – Bellerin won 5/6 dribbles (Bellerin is 2nd on the team with 1.8 successful dribbles per game, the same as Alex Ox-Cham)
9 – Alexis took 9 shots (season high, he averages 3.2 shots per game
4 – He got 4 shots on target
5.1 – Arsenal average 5.1 shots on target per game

As you can see, Arsenal dominated the passing in this match. More than just the total number of passes, Arsenal showed steady growth in their dominance throughout this match and really had few fallow periods where they weren’t probing, trying to unlock West Brom’s defense. Arsenal had at least one key pass or one through ball in 14 of the 18 periods I measure.

To their credit, West Brom did manage to keep Arsenal tight in terms of shot quality in the first half. The shots quality graph below shows that despite West Brom only taking two shots in the first half, they generated about the same number of “expected” goals as Arsenal because both of their shots were in the six yard box while Arsenal were relegated to speculative shots from distance.

Arsenal eventually started to pressure West Brom and got a much deserved goal for their effort. Even if the goal was a crazy looping header.

In the end, West Brom nearly did enough to score a goal. They only took three shots in this match but all of them were in the six yard box. More scary, Yacob Smirnob had a huge chance (counted as a Big Chance) to score from feet away but blasted the ball over the net.

Ironically, if they hadn’t spent the entire match time-wasting and showed a little more self-belief, West Brom’s set play superiority and ability to get away with standing on top of Petr Cech might have earned them a goal and a point in this match.

Sources: Whoscored.com, My personal database, and my own shot charts

Great article. Although to give context, it’d be good to see: Players in last 15 mins – how many of the Ozil and Sanchez class players are on the field for those last 15 mins Arsenal in last 15 minutes – how many of the other top 5 and Spurs and United are 2+ ahead with that long to go Overall the stats look great, and we play bloody well in the last period of games but without more knowledge and just from watching us, I have a feeling most of those stats are because we are fighting in the… Read more »

In fairness, time wasting from the start comes from strict instructions from the manager though, and that’s because they know they can get away with it. I have never seen a goalie sent off for a second yellow due to time wasting and the 5 or 6 second rule is very very rarely implemented. I did see Bernd Schuster, when playing for Real Madrid against Bacelona being sent off for not playing the ball, he basically just stood, ball at his feet, without moving and no intention of passing it. I didnt know it at the time but apparently that… Read more »

Has xhaka broken the record there?

can someone tell me why we don’t barrage such bus parking teams with long range shots till we open them up?

That number if players back inevitably means blocked shots and players closed down before they can get a shot off from distance.

Also, if you miss, it’s another 2 minutes wasted for the keeper to take a goal kick.

It works in FIFA!

1. Because most long range shots result in goal kicks or are easily saved.
2. Did you see how long their keeper was taking every time he had the ball?

If only there was a rule to prevent time wasting, eh?

its only something like 3% of shots from outside the area that are scored, and we seen yesterday with Xhaka alone, what happens to most long range shots. We also had a few shots blocked on edge of the area. This whole we need to have more long range shots soundbite is one of the silliest ones. If anything our problem against packed defenses is the lack of bodies in the area, yesterday we seen how the bringing on of Ramsey for Coquelin,and to a lesser extent Lucas for Iwobi, all of a sudden seen us with extra men in… Read more »

I doubt Arsenal can ever wn the epl /cl with Wenger in charge. His style is too predictable.
The attack is slowed by the merry passing.
I hope I am wrong but I believe most fans will agree that come end of
May ,Arsenal needs anew guy .
Its a gamble worth taking by the board.

1. There’s a case to be made that Wenger should step down this summer, but you, sir, have not made it.

2. I think football is more difficult than you seem to understand it to be. We do our best to play quickly through the lines when given the opportunity. I’m not suggesting we were perfect today, but West Brom’s bus-parking made it very difficult to play quickly. We got the job done anyway.

Does the result on the day even matter to you?
Credit to you though, you have one agenda and you’re sticking with it.

To be fair to him, most ppl criticise the wenger out brigade by asking them where they were when the team won and here he is, consistent with his demand. While I don’t want wenger out, I still think the New Zealand fellow has to work with Wenger too if the team were to win the league. Wenger’s body language when the team isn’t playing well could be deflating to the youngsters in the team. When they look towards him as a father figure his body language has to be aggressive and tell them there’s enough in them to turn… Read more »

Frankly, I think your argument makes no sense.

You’re saying that because we beat West Brom (a team that has only been beaten more times in the Premier League by Chelsea than by Arsenal) it is wrong to suggest that Arsene Wenger should not be the Arsenal manager.

Having a consistent opinion (be it pro or anti Arsene staying) regardless of the result makes far more sense at this point than going mental every time we lose or claiming the title is back on every time we win. That is the definition of fickle.

Is 142 passes by Xhaka some kind of a record?
I remember last year the maximum number of passes in a game in the Premier League was 121 by Elneny.

U know who I think would be an amazing signing? Demetri Payet.

We don’t win enough free kicks for it to be worth it.

One name and you managed to fuck up two letters.