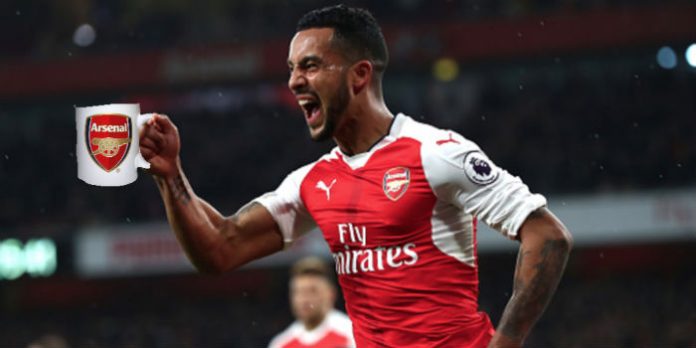 Theo Walcott’s strike against Stoke City was not only his 50th for Arsenal at the Emirates and 100th in League football but also his tenth this season…meaning his missus, Mel, now owes him a brand new coffee machine.

The England international revealed after the 3-1 win over Bournemouth that he was on course for a reward if he could bag another goal before Christmas and in the end, he’s reached his target with two games to spare.

“Time to get my coffee machine my wife promised me!” Walcott told Arsenal Player after the Gunners added. “I’ve got my 10 for the season at the moment – I want to make it much, much more.

“But more importantly I want this team to win something. But like I say, it’s all come down to hard work.

“Me personally, I’ve been working really hard and I think it’s just breeding into the whole team and that’s what the team is about.”

Arsenal’s win this afternoon temporarily takes us top of the table and maintains our unbeaten league record since the opening day of the season. Walcott says the impressive run is down to the whole squad contributing.

“It’s going well for us at the moment,” Walcott added. “The use of the squad as well – I can’t praise enough the amount of players that are ready when they’re called upon.

“Obviously like Alex [Iwobi] did today – 2-1 is not a nice sort of score at the time but he had a fantastic finish after great work from Alexis.”

Well done to Walcott, Iwobi and the whole team.

Top of the table, here to stay.

Hope he gets a latte more goals this season.

And his wife promises more treats if he performs well. On the pitch.

Do we really want to see him get his “treats” on the pitch? I prefer video

If he does, he would have justified his big money contract even though it Costa lot for the club.
I’ll get me coat.

Treats on the pitch from his wife?? 😉

Theo I’ll buy you a pack of jammy dodgers if you score 25 goals this season. Keep going lad

I did predict 26 goals for Walcott for this season, I hope I am wrong and he produces 36 or 46.
If Arseblog had a searchable index I could find them

No surprise to see him score again following Hector’a return. He has so much more freedom to float centrally with Hector overlapping.

He roasted pieters for the equaliser.

I just love how Theo has proved that he is still valubale to our team this season. And I am really starting to belive that this could be a really special season

I was going to make a short black reference but didn’t because racism.

Seriously though what a tightarse! A tenner for a coffee machine! Does he get a soda stream for 20?

Theo’s now a tenner machine this season alright but Mrs Theo’s gift is more likely to be at this end of the coffee machine market – http://www.coffeeitalia.ie/victoria-va388.html which reckons:
When you combine tradition and experience with breathtaking innovation, the result is high technology and high reliability. Witness Theo, the special goals machine. Theo combines high value materials and the accuracy of details guaranteed by craftsmanship, with the most innovative technologies that are opening up new frontiers for the whole world of Gooners.

Watching his goal again, it really was not at all easy–quick reaction, perfectly placed near-post strike. Really a quality goal.

eddymc2
Reply to  A Different George

A Giroud trademark, the near-post one touch finish.

Is coffee machine the name for some kinky sexual position? if so, good for you theo!

Next time you get a coffee watch how the barista clean the machine between orders ?

As I said, people have to be less restrictive in their thought process. The reaction is always to play the last guy that was effective like Lucas last game or say Alexis over Giroud. These aren’t either or choices BUT variablesand options. We can play GIroud and still benefit from Alexis on the wings. We can play Alexis up top and then put in Giroud or GIroud first then Alexis. Remember both Walcott and Iwobi’s goals were from the flanks and channels cutting in. Which is why I have said who plays upt op is frankly moot because we are… Read more »

I love this Theo Walcott. Seems more like a fighter and a team player with a real hunger for the ultimate prize. No, not the coffee machine, the title of course.

Hopefully this will filter through to the other wags. Coffee machine way better than a French press in the 72nd minute.

It Is What It Is

I know he’s a good finisher, but that goal made me rethink a lot of things. Difficulty: 8.5 minimum.

Now he appreciates application and hardwork (thanks Alexis), I feel he’ll never look back/regress. He seems willing, and confident to try new things – which is why I’m pleasantly surprised. That CL goal from outside the 18, is another example.

Complacency, it seems, is now out of the window. Massive potential, being realised by our elder statesman.

Well done Theo, but be careful Mrs. Walcott; remember finances are tight at this time of year & you have a new-born to provide for. Don’t put the family budget at risk just for a cup of coffee ?

That goal is certainly one to pour over.

/forgets coat, shivers on the corner begging for a cup of coffee