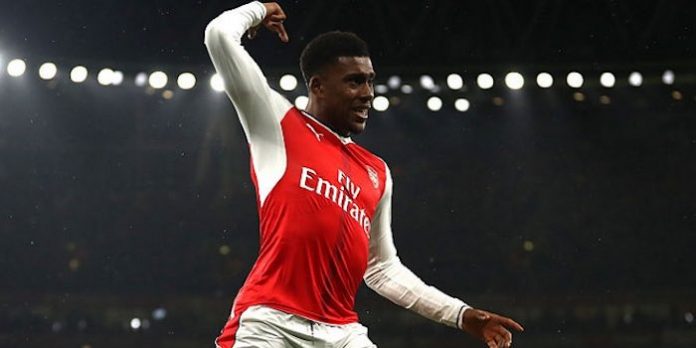 It’s a testament to the competitive nature of the Arsenal squad this season that you can make a very good case to start either of Alex Oxlade-Chamberlain or Alex Iwobi on the left.

The former has 6 goals and 6 assists to his name this season, while the latter has got off the mark with two goals in our last two games to add to the 3 assists he’s already provided.

The 20 year old had endured a difficult little spell, natural enough for a young player, but now that he seems to have come through it, he’s determined to get back into the starting XI.

“I just need to kick on now and show what I can do to get into the starting team again.”

Earlier, Arsene Wenger spoke about Oxlade-Chamberlain and the step forward he’s taken this season, insisting he wants him to stay and sign a new deal.

“Alex Oxlade-Chamberlain is a lot more efficient going forward now,” he said. “He can provide – he gave a great ball for Ozil on Saturday – and he can score himself.

“That’s what we want from him. I think the player loves it here, he’s integrated with the qualities we want him to have … overall I want him to stay.”

We’ve got some good Alex action going on.

Get us double figure of goals too lad.

I just love this boy.

JustAGooner
Reply to  Mayor of Woolwich

Give us title(s) please… any

That’s right step it up and keep it up or ……

more of the Alexis actions please

Would love to see a triple Alex frontline sometime this season

The Ox has to play on the wings even though Wenger said he has qualities to play through the middle. Ox is much better with the game in front of him and I thought Wenger would have tried him at attacking RB like Moses or Valencia when Hector was out.

It’s great that both are showing what they can do and providing competition for each other. And scoring goals. When the season began I would have said Iwobi without hesitation but Ox has come on a bundle the last few games. I think it has so much to do with confidence with him and Arsene is right to keep picking him in the starting line-up to boost that. Then the time will come when Iwobi can start some games to give Ox a rest and rotate the squad without damaging Ox’s self-belief.

He has always been a very good player when on song.. He kept Walcott out of the team, whenever fit, if you take a look back at the last few seasons. Wenger always preferred him, but his injuries and then lack of form hampered his progress. I believe him and Gnabry would have already established themselves as our regular wingers (AND WORDCLASS WINGERS) by now if not for injuries.

off topic…
BBC describes ballon d’Or as the greatest prize in football!
Or maybe it’s a mickey mouse annual ego booster for Ronnie and lionel.
How can it compare to winning the World cup? Or Champions league? Or anything you win by actually winning football matches as a team. Total BS.

It is definitely the greatest individual prize you can receive

It’s an award not a prize in my book. Also, there’s a FIFA best player and FIFPro awards now too. Is an award voted by selected journalists greater than one by your peers? Either way, they all don’t mean a great deal.

This how it should be. Everyone should play at a very high level to have a starting spot

I saw the headline and instantly thought to myself, “Excellent topic, I’m gong to write a response that begins ‘It’s a testament to how competitive our squad is …'”

Then I read the article and realized I’d been beaten to the punch. Oh, well. It’s all true anyway. And I think it’s wonderful that we have such profound selection headaches nowadays.

Take it easy Iwobi. As good as you are developing, it takes a lot more than just scoring to get on the starting eleven.
He is too young to be talking this much.
Worry about being consistent and be happy to be on the first team.

I’d reckon that The Ox has been more consistent than Iwobi this season. But they seem to enjoy rivaling each other for minutes.

Great options for us wide now – Theo, Ox, Lucas, Welbz and Iwobi for just 2 places.
And that’s assuming Alexis at CF.
In more than 40 years as a gooner i can’t honestly can’t remember as deep a squad as we have now.
Course now we have to win the PL
to realize the potential.

Really Hope OX signs, having these two fight for that left spot will only be good for us moving forward

Speaking of Alex, what happen to Alex Song now?

YOu won’t hear this from the media of course but ARsenal (and Wenger) has been rather successful bringing players up from the Academy. BOth Jack and Gibbs are acs’. BUt in recent seasons, Wenger has had the correct framework put in place (with experience and quality in all positions) to foster in a better breed of players able to be mentally better prepared. Bellerin, Iwobi and Coquelin are all put through by Wenger when many voices called for him to buy in market or did not think they would be good enough. Wenger has a reputation for development and this… Read more »

To the tune of Wannabe, by the Spice Girls

Iwobi’s a baller,
Gonna go hit that pass
Runs like an Impala
Alex has some class