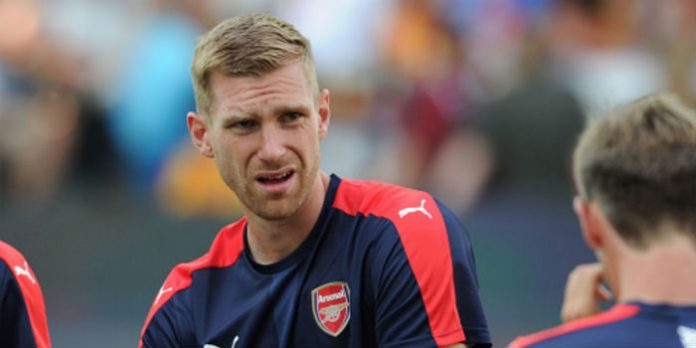 Per Mertesacker says he’s unhappy with Arsenal’s lack of fight in the away defeats at Everton and Manchester City and called on his teammates to work harder to prove to the fans they have what it takes to challenge for the title.

Knee ligament damage may have kept the former Germany international sidelined since August, but as club captain, he remains a vocal figure in the dressing room and used his latest interview with the matchday programme to rally the troops.

“I wasn’t happy with the way we fought, especially in the second halves [at Goodison Park and the Etihad]. There’s something we need to prove to our fans here and show them that we want to reach something, that we want to achieve something.

“First of all, we need to compete. The fans have always been great, especially away from home, but we cannot drop such performances in a row. We feel absolutely uncomfortable with it.

“It’s down to the players to show that we can put in the intensity, can get everyone involved. The fans will follow us and support us, as they always have been.”

He added: “It’s really down to us to show that we are good enough and can put the intensity in. We’ve spoken about that a number of times – when we put in the drive, when we match teams physically, we are almost unstoppable.

“But if you don’t do that, if you lack another five or 10 per cent, you won’t win any Premier League games.”

You can’t really argue with any of that. Thankfully, the captain’s words seemed to be heeded at the weekend as we ground out a hard-fought 1-0 win over West Bromwich Albion.

There remains a lot of ground to make up on leaders Chelsea with Petr Cech predicting Arsenal need to hit at least 87 points to be in with a chance of winning the title.

Here’s an idea….
Learn from the last 12 years of repeated mistakes with regard to attitude and application.
Just a thought.

I think BFG’s words had a hint of that already. He’s attacking a well-known attitude that has plagued our teams for years. But more refreshingly, one gets the idea that the team is changing. The talk from the media department signals an attitude in which ambition is the bed-rock. It is a good thing as it also creates the challenge and the desire to prove one’s ambitions. Anyways, that is the mark of champions and I, for one, encourage this attitude.

You’re easily pleased, a laboured 1-0 home victory and press release from the Arsenal PR department and all is well again

I appreciate any team can lose at any given time and against any given team, however for the past decade it feels like the players state the same isssues over and over, such as:

The games against Everton and City, were lacklustre to say the least. The amount of games we seem unmotivated for over ecent years is worrying.

Yeah, always easier when you’re not on the pitch… We’ve already lacked fight with you on the pitch, Per.

So you’d rather him just sit on his hands and not point out the team’s flaws? Nowhere did he say we’d have all of our problems solved if only he were still on the pitch.

so u think we are missing per as a defender

Why not
Reply to  janine

For some games. He is the best option alongside kocielny.

It’s amazing how Arsenal fans can have a go at a player for saying something that they agree with!?!

Frustrating really.
Hope we can go on a run and for City and Pool to draw.

Fool me twice shame on me. Obviously ?

Calling Kos a bit of a wimp eh ?

Nobody should have to tell them to fight. Nobody has to tell Alexis to fight.

Why does this continue to happen and at such important times? For a team apparently to be so strong mentally why do they continue to shoot themselves in the foot? Away to Everton okay it happened. You would as a player be fucking sure it wasn’t going to happen at city. Which when it does, why? The players change but the same things happen. Are they not prepared enough? Are we do inflexible in our tactics that we can’t change things? Can the players not change things on the pitch themselves when they see its not working if the manager… Read more »

Why? Because arsenals tactics are rather specific for what is seemingly a fluid team. Always looking to play out and build in the same patterns. The players instinctively look to move the ball through the same patterns, when they are blocked it takes them a fraction longer than it might take others to find a new route because they expect to continue the pattern but cant. When the high press is being utilised by an opposition this leads to lots of pattern blocks and a reduced period of time to find a new route. With the increased route find time… Read more »

Teams are a reflection of their manager, so it won’t change until we get a new manager

What is the perennial theme in all these situations? The players are different but the one constant is Arsene Wenger. This is his mentality manifested on the pitch

Sant Carzor wouldn’t go down without a fight

Sanchez is industrious & truly fighter . If team could copy him then team would not loose winnable games against Man City , Everton etc.

How do you train players in fight and the will to do anything not to lose , it’s a natural trait that Alexis has in abundance but it cannot be taught or trained you either want it or you don’t

Kwame Ampadu Down
Reply to  Sam

How do you train professional footballers who are supposed to be ambitious to fight hard? Maybe a bit more ruthlessness from the manager would work? When was he able to drop the likes of Özil or Ramsey when they were not playing with the intensity required to win? How did Kloop or Conte motivate their respective sides? I personally think Wenger is not willing to do what is necessary. He’s not willing to cut the leporous limb for the good of the body, while the winners are able to. Look at fergie, what he did with the likes of Beckham,… Read more »

They have to want it for themselves first and foremost, otherwise, forget it. And those second half performances at Everton and city make me question our resolve.

Why is per talking rubbish no one was happy bout the everon game or city game , would him being on the pitch made a difference ur too slow mate and u aint the one that has to pay all the money to see the games, may be the fans should get their money back

He is entirely correct, which is damning. I’m bored of the squad consistently failing to perform in big matches. The fact that they the captain needs to encourage / plead with the players to put in 100% physical effort is shameful. And frankly, it all falls on one guy (as much as I love him).

I think Wenger is “allergic” to being the bad bloke.

So Per is doing it for him.

It all depends on the team we face.

If they sit deep and intend on defending, we would be better off starting Giroud.

If its a team that prefers open play, Alexis will profit better from the extra real estate.

There is no Plan “B”. There are different tool heads for the job depending on the problem on hand.

Mertesacker as Captain is absolutely right & it doesn’t matter even if he isn’t playing now.He is a player with loads of experience.Players are trained to fight as was the case at Man U under Sir Alex.Klopp & Conte have changed the mentality of their teams&you can see how they fight for the ball& seem to have that never die attitude. Unfortunately, it’s missing at Arsenal now.

All these years of frustration, because of two important ingredients, temperament and fight…and the only common denominator, Arsene Wenger

I don’t think Wenger lacks fight. He won’t be in it for so long otherwise. Other gaffers would have jumped ship early when their stock was at the highest and went for greener pastures. Wenger stayed to build the pastures and grow his teams organically. But he is a manager that tends to have more of a hands off approach when it comes to in game management. He allows room for player interpretation (much like Jazz) When it works, it is sublime. But when it breaks down, he doesn’t intervene timely enough to make up the difference. Particularly with the… Read more »

In southamerica we call “marking the step” when you do just the strictly necessary to participate in something, but not the plus ultra to make the difference and achieve great things.
In other words, play, manage and investe just to get the 4th place.

Wenger is the constant

Obviously if the management stays the same the results stay the same.