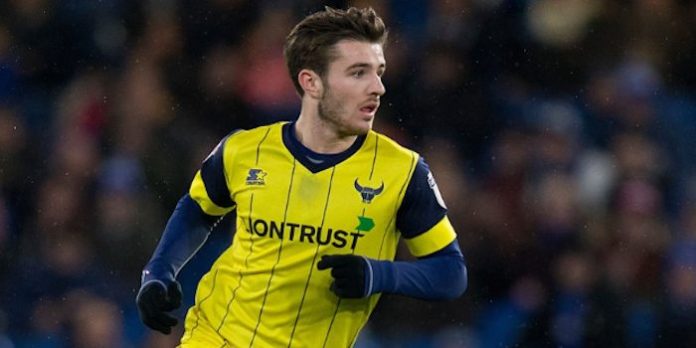 Dan Crowley’s loan spell at Oxford United has been cut short by the League One club.

The promising midfielder joined them during the summer on a season long deal, but it seems something has gone wrong somewhere and the 19 year old has been sent back to London.

Quoted by the BBC, Oxford manager Michael Appleton hinted that there might be a behind the scenes issue at play, saying, “I’m certainly not going to lose sleep if Arsenal have got an issue with Oxford United going forward.

“The one thing we are, and will always be, is very professional. Nothing and nobody will ever get in the way of what we’re trying to do from a team culture and ethos point of view.”

Crowley has made 11 appearances for Oxford this season, scoring three goals and picking up two yellow cards.

It’s also the second season in a row where a loan deal involving Crowley has been terminated early. Last year he was due to spend 6 months at Barnsley, but returned to Arsenal in October without any real information being given as to why.

It will certainly raise questions about the temperament of a very talented player, but one who does seem to have issues fitting in.

Last month, Appleton spoke at more length about Crowley’s attitude after he’d been left out of the squad, and it doesn’t sound good.

“There are a couple of issues I want to make sure are addressed in terms of what he does on and off the field,” he said.

“He’s a 19-year-old lad who has fantastic ability, but his professionalism at times lets him down.

“He’s had a few issues at Arsenal and Barnsley previously. It’s all a massive learning curve for him.

“Ultimately sometimes when people step out of line you have to put them in their place.”

It looks like that warning was not heeded, and it’s down to Arsenal to try get him back on the right path.

Arsenal 3-2 Watford: By the numbers

Report: Negotiations open up between Arsenal and Saint-Etienne over Saliba cup final issue

Crowley heading to Chelsea may be?

Anyone here have any idea on how Jon Toral is progressing?

CoNr
Reply to  Lord Nicki B

Scored a cracker last night.. other than that no idea

The Stig
Reply to  Lord Nicki B

scored a screamer vs Osasuna yesterday. arsenalist got the vid.

Ah to be a professional footballer. All this hype way too early. Temperament is at least 50% of what makes a top player and it looks like Crowley will go the same way as so many before him. Shame when you consider his level of talent but he won’t be the first, or the last.

He needs to get a grip of himself before he flushes his potential down the toilet. Was such an exciting prospect but this is worrying

another one that bites the dust…

Especially when compared to a player like Toral, this feels very disappointing.

To be fair, the only reason he went there was to get game time. The idea is that as a young player you are sent somewhere you can develop, and in such a competitive profession it’s vital that you’re doing everything you can to improve. He can stay at Arsenal and not play games, and while I’m not saying that he’s necessarily a victim, I think its fair enough for him to get frustrated if he’s not even getting onto the bench at times. While of course Oxford have a team to run, from his point he’s an Arsenal player… Read more »

If he’s not getting on the bench at all, he should stop and think why that is. He’s played 11 games, scored 3 goals, and done well, so I don’t think there’s an issue of talent, it’s clearly about attitude.

If he thinks that because he’s come from Arsenal he has an right to play, then it’s time he woke up. Maybe this will do that to him, although last season’s terminated loan doesn’t seem to have.

exactly . this is the second time a team has cut short his loan spell and one that has nothing to do with his ability or performance on the field. this does not feel unlucky , he is obviously doing something they dont like off the field.

he is a kid , and his chances will come. he just needs to keep his head down and do well when called upon. attitude like this will never get him anywhere regarless of how talented he is

The Oxford manager mentioning on as well as off the pitch behaviour suggests a piss poor attitude. With it being the second club to send him packing it’s time to pull his socks up or join the ranks of had it at their feet but blew it and now it’s over’s. It’s entirely up to him.

His grandad Aleister is a bad influence on him.

The wickedest player in the league.

My cousin is an avid Oxford fan so I asked him what happened. This was his worrying and slightly hilarious response: “He was such an arrogant little git! Allegedly the last straw was when he started ‘stirring his tea too loudly’ during a team meeting! I actually had a long chat with him over the summer just after he signed. He was a nice enough lad, but he told Kristen she was far too hot to be with me and then asked us to meet him at a bar later….cheeky little twat!!! On the pitch he only played for himself,… Read more »

In the little I’ve seen of him play I’ve had the exact same impression (that he thinks he’s too good for his teammates). Looks an arrogant little shit.

Can you put a few pics of Kristen up please?

Remember when Barca threatened to bench Messi because he slurped his soup?

The Greatest Tea Stirrer To Ever Live

This is so disappointing. He was such a hot young prospect.

But sounds like he could be turning into a cunt of David Bentley proportions. What a waste.

Hope he can get it together. 19 is young and I can remember the dumb shit I was doing ten years ago.

I can’t even.. And therein lies my problem, most likely.

So you’re saying, he might be allright when he’s 29?
Maybe in turkish league two, the way he’s going about things.

Biologically speaking the brain is not mature before the age of 25 approximately. So in terms of biology he is still a dumb child and children are stupid or immature or something. So slap him on the wrist and bum atleast 2 more years see if he wises up. It might happen, sure as hell wouldnt be the first. There is also a good chance he wont learn before its too late and he will regret it for the rest of his life. Brutal as fuck but thats life and even more so in football.

Mr. Crowley, what went wrong in your head?

I think you have to stop sending your top prospects to League One sides. Appleton’s playing career went in reverse and his coaching career has gone in reverse. These guys seem more interested in looking like a big boss than in helping to bring along the talent. Most would be pleased to have a fiery young man with bags of talent. Seems like they’d be more at ease with some League One lifer geldings.

Loan has to be mutually beneficial, if he is upsetting the team dynamics and will piss off back to parent club after 6 months or a year without any financial upside to the loan club doesn’t really benefit them. Plus I’m sure they have plenty of precocious youngsters of their own who may be less talented (maybe not) who would give up a lesser organ for 11 games in their first team.

I went to school with him – he was an absolute twat; I guess nothing’s changed then