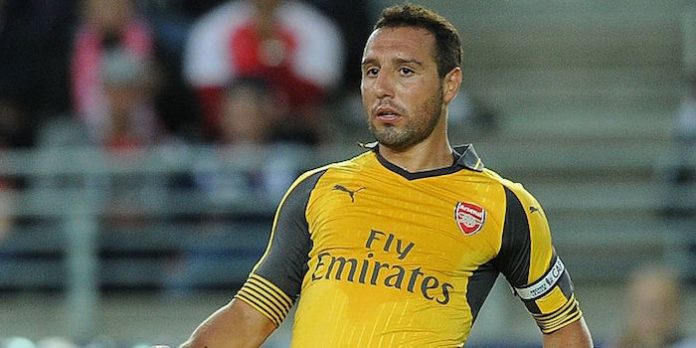 It’s being reported that Santi Cazorla has been advised he need surgery to properly repair an Achilles problem that has plagued him for most of 2016.

The Spaniard picked up a knee injury in November 2015, but his comeback was delayed because of the Achilles inflammation.

He then aggravated the injury against Ludogorets in October and hasn’t played since. This afternoon, journalist Eduardo Fernandez-Abascal – who broke stories about Hector Bellerin and Lucas Perez – said in a series of Tweets that surgery is required.

“Been told that Santi Cazorla has been advised to undergo surgery to correct Achilles injury,” he said.

“The operation would keep Santi Cazorla on the sidelines until 2017 but will be good in the long-term.

“Cazorla visited a top European specialist earlier this week. Arsenal and the player are expected to make a final decision soon.”

Been told that Santi Cazorla has been advised to undergo SURGERY to correct achilles injury #Arsenal https://t.co/CgoEaBHGRB vía @IBTimesUK

After the Southampton game last night, Arsene Wenger was asked about the Spanish international’s fitness, and said, “Cazorla I don’t know, honestly. It’s just inflammation. It can go in two days, two weeks – I don’t know. He has no setback, the inflammation is just still here.

So, I guess we’ll have wait and see. It would be a real blow if he were to miss many more months due to surgery, particularly as we’re still trying to find an effective way to play without him.

Arsenal hoping Auba and Gabi are fit for Chelsea clash

I chose to believe what Wenger said on this one but a surgery after two months fits the typical Arsenal injury treatment scheme.

Well this is some seriously shitty news…

Really does make you think about Wilshere’s move to Bournemouth… A clause to recall him at some point would have been nice.

Totally agree. I rate all of our CM options at the moment. But none of them have the ability to retain possession and dribble the ball past a man like Cazorla. Wilshere is the closest thing we have to the Spanish magician!

Is what I said at the time…

Worst thing is that it wasn’t exactly unpredictable that this would happen. And I’m not just blaming Wenger, Jack was short sighted not to think he would get an oppurtunity. Best case scenario IMO is replace Coqzorla with Ramsey and Xhaka, with Ramsey doing what Coquelin did but with added goals. Wenger needs to sit him down like he did in 2013 and get him back to basics. Use your energy, win the ball high up the pitch, move it on quickly then get in the box. When he’s at his best he leads games for tackles and interceptions. Its… Read more »

There is no way that Ramsey can do half of what Coquelin does defensively. He isn’t that player, never has been, never will be.

Hopefully it’s bollocks. If not, hopefully the surgery goes perfectly and he’ll be back very soon, while Wenger stumbles upon an equally effective CM partnership.
As much as I hope it’s all fine the pessimist inside me is saying “season over, we couldn’t cope last year, so we wont cope this year. The pessimist inside me is a cunt, why can’t he get an ongoing Achilles problem that puts him out of action.

The pessimist within
Reply to  Cdm995

Completely predictable. Club went into the season knowing that he had chronic achilles inflammation, and yet Wenger was still playing him 3 times a week until he broke down. The man never learns.

A Different George
Reply to  Goonerboy

Whatever else it is, it is not “completely predictable.” Wenger “never learns?” Really depressing attitude.

That’s exactly what it is: predictable. And I tend to agree that Mr. Wenger never learns. It doesn’t matter how many thumb-downs one gets. It doesn’t change anything. I once said an Achilles at his age is a potential career ender, and that it is not for nothing that endless problems are called Achilles Heels; and many here went “Igbo, you need an education, go watch the movie, go read about Greek mythology, bla bla”. Wenger should have known that a 32 year old that cops a knee ligament damage and an Achilles in one season isn’t someone you should… Read more »

You’re right man, failure in squad planning. My guess is he hoped xhaka would acclamitize (and xhaka is doing that), and that Jack Wilshere won’t act like a bitch and ask to be loaned cos he didn’t make one England squad.

Xhaka has been horribly disappointing so far IMO. Does not impose himself at all.

This is the end……

By all means, let’s “wait and see” for another month before deciding he needs surgery after all. that would be the typical Arsenal way.

No Santi Claus for Christmas? Won’t somebody please think of the children!?!?

We miss Santi. No?

Why we didn’t place a call-back clause in Jack’s contract is absolutely baffling.