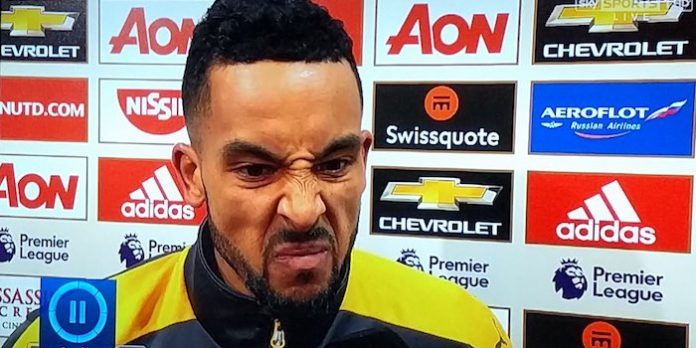 Theo Walcott is unlikely to face Crystal Palace on Sunday, while Arsene Wenger is hopeful that the knee injury sustained by Kieran Gibbs in the 1-0 win over West Brom is just short-term.

The left-back left the field late in the second half after a clash of knees for which he was booked, but the Arsenal manager is optimistic that it’s just inflammation from that.

“From the last game, I think we lose Kieran Gibbs,” he said. “It’s not big damage to his knee but he has inflammation and I don’t think he will be available.

“On Wednesday he had a scan, but it just showed inflammation. Hopefully it’s a short-term injury.”

And on the two wide players, Alex Oxlade-Chamberlain and Walcott who both missed the West Brom game, he continued, “Alex looks like he could join in normal training on Saturday.

“Theo Walcott will still be short.”

Shokdran Mustafi is back in the squad after his hamstring injury, with the manager set to make a decision between the German and Gabriel, as well as rotating his squad adequately for two games in 48 hours.

Arteta: I doubt Mustafi will be fit for cup final

Mustafi: We could have done better today

Probably bench Mustafi vs Palace and play him vs Stoke? Definitely missed him vs Everton and City.

I hope we don’t wait until we play Stoke or we don’t see him on the pitch until May!

I say play Mustafi right away. Gabriel back to bench

Nooo, worst case scenario to rush a player straight in the team after a hamstring injury, looked at ramsey he was always rushed back and had a recurrence on his hamstring, gabriel did really well na he was not to blame for everton nor city, mustafi can get back for Bournemouth way.

Wonder if we’ll see Welbeck come back in? With Ox and Theo out it’d be good to have him available. Let’s hope he can make an impact like he did against Leicester last season!

Welbeck has just joined full training, there’s no way he’s ready. He needs at least another week of training and at one reserve team match before we can count on him.

I was thinking the same thing about Mustafi. No way he’s ready for a full 90.

What about giving Holding a game and resting Gabriel for one?

I say play Perez and Gabriel, since we play at home and it might still be a bit soon for Mustafi. And then play Mustafi away on 3rd of January.

H18ury you read my mind.

So does that mean Ox could be available for the next match?

Not if he’s heading to Liverpool 😉

There’s no fcking way we’re selling the Ox to liverpool. Don’t believe a word of the Daily Mail shite

gooner of Oz
Reply to  JB

Could swap him for Coutinho. My roomate did it on PES. I hope Wenger is aware of that

Klopp has come out today so confirm that the Ox rumours are steaming hot bullshit.

Mustafi should be rested and play next game

2 games in 48 hours shouldn’t be allowed

The TV companies are hard up for cash. They severely need ad revenue to stay afloat. There’s only so many re-runs of Danny Mills being megged, or Martin Keown clothes-lining Van Nistelroy, before they need MOAR football to punt copies of FIFA in between. You entitled fans will just have to say goodbye your wallets/families and endure crazy travel times in the cold.
Sacrifices have to be made.

Football clubs aren’t innocent little lambs in all this either.

Stuck on repeat...
Reply to  NorthernGooner

Completely agree NorthernGooner. Clubs are more than happy to take bumper pay days & the cash available, yet complain about the unfairness of what is expected in return.

Seems to spoil the games too, when there are too many. Players are too tired.

There are still 38 league games per season. No more, no less.

I’m old enough to recall when the PL was a 42 game season. The players weren’t tired then and used to get paid the same in a year as what players earn in week nowadays.

I’d like to see a Man Utd team from the early 90s try to keep it below 10 against any of the modern era’s cloggers. The game has changed, the standards expected from the modern footballer are just so much higher. Teams from 25 years ago would struggle with a 30 game season in today’s game.

Not least because they weren’t seldom a bunch of pissheads on a fish and chips diet. When men were men and all that shite.

I am somewhat new to this sport (since 2010) but it just seems crazy that the BPL seems to be the only major league to play so many damn games during the holidays while the other major leagues in Europe get such a large break to rest. From what I see, the Bundesliga is off almost an entire month, and Series A and the others are not far behind. Could that be why the English teams keep struggling in the UEFA, and why their players get so many more injuries. Don’t know, just wondering!!!

That’s exactly why the PL will always play many games during the holidays – because other leagues do not.
Not only is it a ‘tradition’ in the UK for this to occur, but from a financial viewpoint, if the PL can offer its product to viewers all over the world, when other leagues simply have no product to offer, global demand for said product would he insatiable.

Kos needs a rest too so I think it would be best to play holding too at some point. As does Alexis and Ozil and…the whole squad with us playing two games in 48 hours

Glad to have Mustafi back! That being said, his absence has been overrated…we simply don’t defend well as a unit. Our lads are not well coached

Check out results this season with Mustafi and without. Then you may wish to revise your comment.

Why don’t you just tell us spinner?

We remain unbeaten with him starting…which is a fantastic record, long may it continue. I get that, but weren’t we conceding cheap goals when he started or making silly mistakes?

Does anyone think Theo is having the festive period off to be a father by spending holiday period with new baby and recharge to get in the form he was at earlier in the season?

And enjoying his coffee machine?

If Theo and Ox could be swapped for just one modern day Robert Pires…would you??
Up for “yes” down for “no”…

Yes, and while we’re at it I’d swap Henry for Giroud, Bergkamp for Sanogo and Taylor Swift for my missus.

If you get Taylor Swift, can i have your missus?

gooner of Oz
Reply to  Paul

Of course yes, still there are so few with his characteristics. Griezmann when he played wide was a close one. Yet again he’s considered second only to Cristiano and Messi. Out of touch. Mahrez maybe?

If ‘Theo will still be short’ what does he say about Santi?

Ox may be a risk.

I think Iwobi did well against WBA and picks through the lines with MOnreal and Bellerin offering width.

Lucas Perez is also an option.

Welbeck, Ox and Walcott will be all in frame shortly, plenty of options.

There is a case for Iwobi maybe played in midfield too but I suspect Ramsey will have first bite of the cherry if should one of the Coq/Granit partnership need to be sacrificed for more offensive bite.

Theo ain’t getting on no damn plane, fool.
He has been working on his scary face.

Think of the last few games no theo, mustafi, santi but bellerin and coquelin play clever at times these crosses and ball into the area boxes need to be perfect seeing game stats of players arsenal fc passes, or possesion play high stats per game of course alexis ozil need rest but these injuries and flu season did a slight damage to the players full team plus some subbing decisions of playing all three strikers pace arsenal team have

Yup Arsene, Walcott will actually always be pretty short…1.76 meters to be exact

Just kick the ball into the goal and get 3 pts.