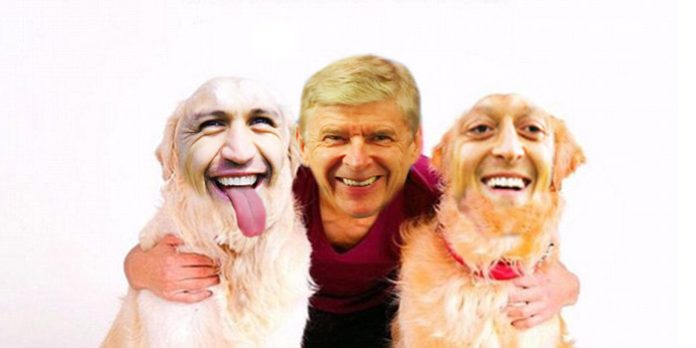 Arsene Wenger expanded once more on the contract situations of Mesut Ozil and Alexis Sanchez his press conference today. Read all about it here.

Aside from that stuff though, he was asked about the contribution the star duo have been making on the pitch this season, and he hailed the quality and professionalism of both, saying that when they’re on the pitch there are no doubts about their commitment.

If he sounded a little jaded at having to talk contracts, Wenger was happy to discuss what the two record signings – who have 21 goals and 12 assists between them this season – have contributed to Arsenal’s campaign thus far.

“They’ve been hugely important,” he said. “You can talk a lot in a press conference but the most important thing is what the players do on the football pitch.

“The commitment of Sanchez and Ozil is absolutely total for the team’s benefit. I am very pleased with that.

“We are professional football people and people forget many times that the first quality of a professional guy is to give absolutely 100 per cent as long as he is somewhere,and not to project yourself on two years time.

Pressed on why he thought the pair had been so prolific in the early part of the season, he said, “I would say that our chances created are cleaner and clearer and that’s why our finishing is better.

“At home we have to let go of the handbrake and play with full flow. Then we will score more goals.”

Arteta opens the door for Holding, has nothing to say about Ozil

Oh dear. Are we allowed to use the picture as a facebook cover ?! XD

We always maul stoke at home

Remember last year, when the announcement came out near the end of the match that the trains back to Stoke were all cancelled?

I’d love for something magical like that to happen again this year, it’s my annual trip to England for a match and I really want to see something special.

Hope you get to watch Arsenal give them a royal mauling!

Though the Telegraph can still go with a headline like this:

http://www.telegraph.co.uk/football/2016/12/08/mesut-ozil-alexis-sanchez-could-leave-arsenal-end-season-says/ despite what Arsene said.

Well they aren’t wrong really, they both “could” leave. I’m not saying Arsene is being dishonest, but we all know it wouldn’t be the first time he’s said something like this and it didn’t pan out that way.

They could leave. But the Telegraph say that Arsene said they could both leave at the end of the season.

These players seem to present a clear test of the current “ambition” of the club — i.e. Wenger, the board and ultimately Kroenke. Do we want to join the top clubs in the world (measured in trophies, not the other things that make Arsenal the best) or not? Or are we satisfied playing pretty football, maintaining large cash reserves at all times and hoping that a league or CL title falls in our lap when/if the stars ever align perfectly.

So i have a hideous face now?

So this is the news cycle’s current Arsenal “story”, then? Instead of “same old Arsenal, struggling in November” or “injury-ravaged Arsenal”, it’s now “stars could leave” when there’s 18 months to their contracts’ ends and an ongoing PL/CL challenge. Clickbait by a bunch of tossers.

I don’t know how you guys feel but I would rather Ozil and/or Sanchez run their contracts down and join a rival than us sell them like we did with the Dutch scum. Wenger proved he’s a manager that can turn things around and has shown signs that this won’t be like our previous seasons (we finally beat Chelsea, didn’t lose in November, finally topped out Champions league group). However, if we lose Ozil and Sanchez then we are going back to where we were after Fabregas and Nasri left. Arsenal and Wenger have been talking so much about how… Read more »

There seems to be a lot of angst in these comments. Chill out, folks! What’s happening, is that the negotiations are currently going on. And that’s all. All this doom and gloom speculation about how we’re about to lose Ozil and Sanchez is way over the top. Both of them are happy here. No need to worry. They don’t need to sign their contract extensions today.

My prediction? They’ll both sign long-term contracts. No problem.

Yes I think both would settle for something like 170 000- 250 000/week which is by no means unreasonably given their importance for the team. That is what we would have to pay for world class talent if we were to replace them next summer so it would be just easier to pay it now for these two. The only worry is that is breaks our “socialistic” wage structure and that other players would want to increase their wages as a result. Also the fact that we can attract top players and are also signing them on a constant basis… Read more »