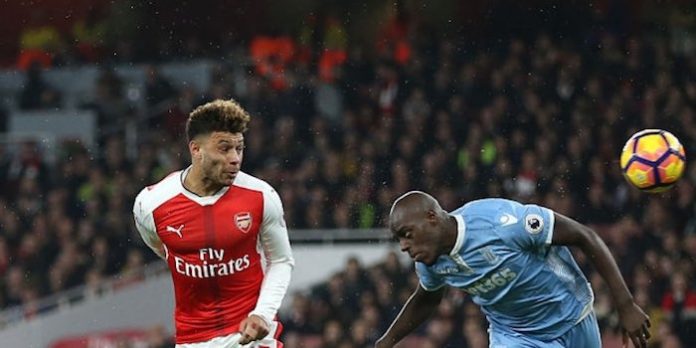 Arsene Wenger says he wants Alex Oxlade-Chamberlain to stay at the club as the 23 year old heads towards the final year of his contract.

The midfielder has made some real progress this season, scoring 6 goals and making 5 assists from his 21 appearances, and looks like he’s starting to realise all that potential.

Weekend reports suggested that no contract talks had taken place but Wenger, while refusing to confirm or deny that, insisted he wanted to keep the player.

“I want Oxlade-Chamberlain to stay. I brought him here at a young age, I think he’s developing well.

“This season he is making steps, he’s moving forward, and when you invest so much time and work in a player, I think the player loves it here, he’s integrated with the qualities we want him to have … overall I want him to stay.”

When asked what he thought had been behind the upturn in form and performance level, Wenger said staying fit and available has been a key consideration.

“I believe that first, his career, like Theo Walcott’s, has been stopped many times by injuries. He had many, many setbacks.

“I think its the first season where we have a consistency of presence. They play in positions where the physical demands are higher than any other.

“Alex Oxlade-Chamberlain is a lot more efficient going forward now, he can provide – he gave a great ball for Ozil on Saturday – and he can score himself.

“That’s what we want from him.”

A byproduct of Alexis going into the centre has been much more playing time for him, and I think it’s really paying off, he’s well on his way to easily his best season.

To me, ox is theo v2 and gnarby is ox v2. Out of all 3, I rate ox the highest when he first burst on scene. We did not managed to keep gnarby. Let’s try our best to keep ox.

That zero-backlift-cross for Özil had future Sanchez written all over it.

SB
Reply to  Someone's Something

I guess that’s probably the most conclusive opinion poll on this website!

He is only 23..! Can become the best goal scoring winger in the world. Him , Welbz and Theo.. together they are going to rule the football wing play! Electric pace, movement and plenty of goals! Exciting times.!

The Ox fits perfectly into our new style of play. Sign the lad up and watch him improve, injuries permitting ,of course.
He could be dynamite over the next couple of years and beyond.

The problem with Ox is that time is running out, he needs to start showing those talent of his now. He is a good boy, by this stage in his career, he should be showing tenacity and winning mentality. Wallcot seemed to have realised that his performances in the past were below par and have improved. Ox should follow suit.

Excellent vision and execution on the Ozil assist! Sign him up!

I’d let The Ox, Theo, Ramsey and even Wishere go if it means the money from the sales could be used to keep Ozil and Sanchez here. Let the thumbs down drain in, and while you’re at it, throw in Jenko as well …

You really are not be related to Einstein with that thinking

Yeah, I’m sure significantly weakening the squad would make it more likely that Ozil & Sanchez would sign. It’s not like being able to compete in the league/CL is a big deal for them or anything.

It is a no brainier. We keep most of the current squad unless we can get an upgrade. I cannot see anyone who could be as good as the Ox available at the moment. He needs to play consistently and protected from injuries.

Injury prone attacker, that’s nothing new at Arsenal.
We should keep him, he’s our Ox

Is Ox (& Theo) form and focus down to a certain Dr. Ceri Evans?

Double98
Reply to  Ditch the Blue

hopefully and not Dr New Contract

Get Draxler in. Let Ox go in the Summer

We all know he has ability. If he adds that ‘good kind of arrogance’ he had in his game when he first joined as a youngster, he will be a beast of a player!

When I saw the poll above, I thought it was a complete no-brainer, and it looks like others share that feeling. The question is ‘How much would you spend to get the Ox now?’

One of the interesting things about players bought young is that they don’t come with the massive price tag that developed players have. I don’t think figures north of £30m would be out of the question, as there seems to have been a quantum jump in transfer fees. The spuds paid that for Sissoko, ffs.

How come we have a lot of 18 months contract situation?

When the Ox arrived, he was raw and without fear. Then came the injuries and the setbacks. Now he is beginning to develop belief based on his abilities and a growing intelligence. He has everything needed to be world class – only he can stop himself.

Actually he is getting better but i still think that Iwobi is better than him in that position. He need to show more just like what Theo is showing this season. He is a very talented young man but has not been showing it in my view. He should be a finished article by now.

I have to say I’d lost faith in him as he had an atrocious record for a forward/attacking midfielder until this season. He had the habit of just wanting to run with the ball all the time and then being a bit clueless in and around the box. Maybe because of his technical and physical attributes it was assumed he’d be able to learn positioning and assessing the game quicker but it seems like he now knows what to do. At 23 he’s possibly been luckier than others in being able to still be here without having one good season.… Read more »

I don’t understand why these contracts are so hard to get done. Ox is playing regularly. If he is worried about start all he has to do is continue to play with confidence and he’ll be fine. With Sanchez and Ozil it is just stupid that they haven’t signed yet. At their level 250/ week is the norm now. If Rooney is on 300 than 250 is a steal for those 2 guys. Sign them to 5 year deals and we are set up for long term success. As for Cazorla, I think at his age and with his injuries… Read more »

When a player is having a good run and playing well, you give them a pay rise and a couple of years extension. This is only just haopening now with the Ox.

He’s always been my favourite player in our squad. He’s the most naturally gifted player I’d seen since Wilshere at 18. I think he has two or three levels to go. I hope he keeps building.

Had this username for 4 years, hopefully this is the year he will finally be unyoked