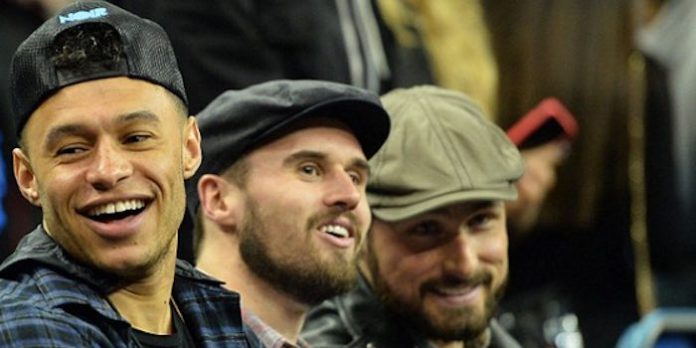 Arsene Wenger says that as well as Mesut Ozil and Alexis Sanchez, the club are working on contract extensions for a number of first team players.

Some of them are because time is ticking on their contracts, like the star duo, but for others there are options which can activated by the club if they choose.

The Arsenal manager is keen proponent of squad stability, and we’re now at a stage when decisions have to be made.

“We work as well on Giroud and on many players,” he said. “There are six or seven cases at the moment but that is the usual case, it is every year like that.

“We have started talking to Oxlade-Chamberlain, we’ve started with Santi as well and will certainly extend with him. We will work with Giroud as well and on many players.

“That explains to you why we have a lot of work to do, but you are only interested in two cases.”

Reports last month said that the club were set to offer Laurent Koscielny new terms, despite the fact his situation is not so pressing.

So, what is the lay of the land, and which players are approaching the point where contracts need to be sorted out?

Santi Cazorla – contract expires in 2017, Arsenal have an option to extend for one year which Wenger says they will activate

Per Mertesacker – contract expires in 2017, Arsenal have an option to extend for one year provided they inform the player by the end of January, at which point it becomes a mutual decision.

So, plenty of work to do to get those players into the Commemorative Rosicky Contract Extension Dungeon.

Over to you, Ivan and Dick, our intrepid negotiating duo.

Check out this week’s Arsecast

Who’s photoshopped the chains and stuff out of the Rosicky dungeon picture?!

I wanted to see how Super Thomas Rosicky was doing at Sparta yesterday – looked it up and saw he played 18 minutes of their first league game and went off injured and won’t play again until the new year at least. Poor guy. What did they do to him in that dungeon?

Many contract extensions are dependent on Arsene own contract, I should imagine.
His own being the most important

Best comment in ages on this site. Cracked me up

Jack’s contract also expires in 2018, if I remebmer correctly. Lot of work to do on that front. But I’m way more confident most of them, if not all of them want to stay, than I was in similar situations a few years ago.

No, he signed an extension a while back

I’d see a lot of churn ahead. Szeszny debucy and gibbs all going out Two full backs coming in.

Brendan from NY
Reply to  Double98

Not sure Gibbs is out. He might well be our starting left back by year end and i think monreal is older. Great competition between those two

Mpls
Reply to  Brendan from NY

Yes, I never wanted him to but I guessed Gibbs might push for a move last summer. So glad he didn’t. He is getting some decent games in and playing well, so I am hopeful he sees his future continuing here. Formidable left side depth. I think he can certainly earn the starting berth in the next couple seasons at this rate.

It also seems to be helping him shake off his unlucky run of injuries.
*knocks on desk*

All jokes aside what is happening with Sanogo? He showed promise and has featured for our first team. He’s not on loan and to the best of my knowledge is still at the club.

So what gives? Injured? Just not good enough?

Interesting to see what happens with Szczesny this summer, I doubt he’ll re-sign given the stage in his career he’s at and will therefore probably be sold. Also, did Roma pay a loan fee for him? Anyone know how much if so?

Sanogo featured recently in the Under 12s match against Tesco F.C. as an 85th minute sub.

Wenger forgets about himself. I love him, no doubt, but he behaves as if the club belongs to him which is, as far as i know, not the case…
He gives lessons to Mesut and Alexis about the way they should act as to their contracts, earning already lots and what the club offers them blablabla, but he is an employee to the club earning even more than them.

Why not
Reply to  Alex

Literally looking for reasona to hate him. So you are contradicting yourself.

I am worried that if Wenger does leave(I hope not!) at the end of his contract,most of these players wont sign da ting

Every time someone puts re-sign on a post here they mean the opposite to how it looks (in fairness the hyphen helps in this case but I have seen resign too).

Cazorla is essential.
I’m also psychologically preparing myself for an Ozil/Sanchez exit. Wenger’s press conference yesterday reminded me of Nasri/Cesc/RVP situations.
I love Wenger but if we lose Sanchez to Chelsea, after RVP going to United, this one might be the straw that breaks the camel’s back.

If he does go, it won’t be to Chelski, they have a wage cap too, it’s £250k, and I’m sure we won’t be far off that by the time the offers are bounced back and forth

He won’t go to Chelsea. There’s been a mild culture change there financially, hence why Mourinho cunted his way out of there last year. They’re actually behaving semi-responsibly financially now. It’s United and to a lesser extent City that are distorting the market with ridiculous wages. For example, Schneiderlin sitting there on 190k a week, can’t even get off the bench. Pogba on 300k a week. Insanity.

We blocked Debuchy to Man U, folks.

“That explains to you why we have a lot of work to do, but you are only interested in two cases.”

-that really explains almost everything: Sanchez and Ozil’s form atm is rocketing in all competitions and media wants to ruin it by getting into their heads! Earlier Arsen told “better not to speak about it” which clearly meant he doesn’t want to hype it as many want to. For example Wiltshire’s contract expires by 2018 and so as super Santi’s, that too by 2017! And why are they focusing only on tow!

We lost players in the past, to clubs with more money and better prospects.
Financially we have stepped up and with the improved squad we have we are challenging on all fronts.
We can hold on to our current stars and attract new ones.
No need to fear the future. Arsenal are a club on the rise.
COYG!

It’s always a pleasure to see the contract extension dungeon get a mention.

Get them in the dungeon and put them in headphones with a direct feed of Rosicky guitar solos until they sign. Actually, do that to their agents. They deserve it.

Get Alexis an oculus rift with Atom and Humber, and one for Ozil of Flamini at a nice restaurant talking future business plans.

Sanogo likely going. Ditto Szsc if there is a buyer. Campbell may also go despite being useful, we have too much at the moment out wide and he hasn’t quite given that bit extra. We should also release/sell Debuchy. Ditto Jenkinson for a good offer. Chambers we should bring back into the fold of the team and frankly, play him in his ‘natural’ position at Rback (Which he did with aplomp for Soton) Metersecker will probably step down end of season with Gabriel and HOlding looking solid enough and the Mustafi/Koscielny partnership propspering. He has been an excellent player for… Read more »

i fucking love you rosicky

I like how nonchalant he is about extending Santi’s contract.