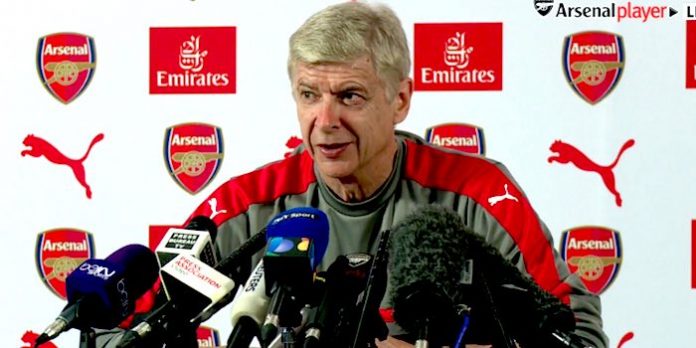 Arsene Wenger has revealed the latest team news ahead of Sunday’s crunch clash with Man City.

After the 2-1 defeat in midweek to Everton, there are no additions to the squad, nor have we lost anyone to injury.

“We should have approximately the same squad who went to Everton,” he said.

“Nobody back. Ramsey’s not back, he’s the closest to come back, so we have some knocks and bruises but they should all be available again.”

On the Welsh international, he put a time frame on his return, saying, “Next week, I believe he should be back in the squad and in normal training.”

There was also an update about Danny Welbeck who is also close enough to his comeback after a knee injury.

“Danny Welbeck is one week away from completing normal training and being back in the squad,” he said.

Welcome back Welbz – he’s going to add a lot to the side.

Good to hear danny will be back soon.

3-1 to us. Ozil to score and assist to shut the boo boys up!

That’s if Ozil decides to show up.
He certainly didn’t against Everton.
He has this habit of not bringing it every game.
If he wants the big payday he needs to bring it everyday, everygame.
I don’t see that yet.

You should be embarrassed…you’ve clearly been reading too many shit articles written by morons!

Ozil is one of the best players in the world…simple as that. We’re lucky to have him and he is lucky to have Arsenal! Sounds like a good fit to me.

Good to hear of Welby. Good to see Arsene has kept same side including the two danger men!!!

we needed the Welbeck news

Helped us defeat Manu, we won FA Cup.
Help us defeat Chelsea, we will win PL.

Gonna add a serious threat/option down the wings………….
Im troubled about Walcs inevitable return to the bench and maybe worse.
He got off to a real flyer at the start of the season, and now??……..its not bad , but hes nowhere near where he was, just a few games ago.
Ant theories out there?

That’s what Walcott does. Has a few good games, then goes back to being his usual self.

He’s been better this season than recent years but I still maintain that we could really use someone better there.

Come on, only one bad game and a guy who has performed well since the season started and who has a good tally of goals becomes a bad player again. Let’s think before we talk.

Yes. He scored a cracking equaliser bringing us back into the game just last weekend no?

Motivation levels have drooped after receiving his coffee machine reward. It’s going to be a lot like our German players post world cup hangover.

I have this superstition that the gunners win only when I predict a bad result for them. So, I predict a 2-0 win for Man City.

I’m pretty sure this doesn’t work if you tell everyone you are doing it and contrive your “prediction”. I thought everyone knew this. It’s superstition 101.

Ya, but by telling everyone that it won’t work because he told everyone, you’ve successfully jinxed the result back in our favour.

OH FUCK! Did I just jinx it?

Godfrey Twatschloch
Reply to  The Playmaker

I tend to jinx it when wearing the expensive official 2014/15 jersey my gf bought for me whereas the cheap black polo from Amazon is yet to cause a defeat. I’ve washed the polo especially for this weekend. Ironed it too!

Let us see what will happen,but i want kronke and co to sort out Ozil Sanchez saga so that the lads should concentrate and play good football that is my main worry otherwise we are balanced.remember we can win all but i did not like to loss 4m a winning position.goodluck boys.

There’s 18 months still to go on their contracts and their agents are the ones doing the discussions. Neither of them will give a fuck about it until the end of the season and it won’t have any effect on how they play.

This time if he comes back and is not playing enough or making any impact I beg @Arsene Wenger should just let him leave, bcs we don’t need injury player anymore

I don’t think you’re with me on this Walcs thing…….
What I’m getting at is that he was sensational in every department for a while …..he was one of the first on the team sheet ……now he’s not far off droppable which is mad

sorry what year is welbeck back

1st) good news We would see,Welbeck is welcome back soon, 2nd news) Mancity didn’t beat since 2014 on met Gunners 3) Haters are laughing despite Gunners lost the match on Merseyside, butt Season still not yet half …? #COYG

Welcome back Danny welbeck good to see you again. And nice one for the update for coming back to Arsenal squared. We are waiting for you soon.

Love to see Perez get a chance on the left,with Theo on the right and Alexis through the middle