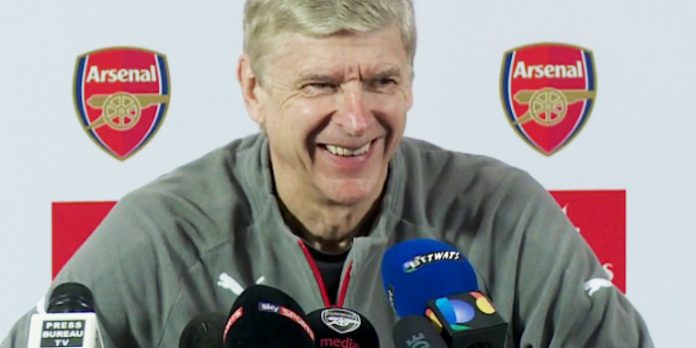 Arsene Wenger was in interesting form this morning at his pre-Man City press conference.

The Arsenal manager threw out some good one-liners as he once again had to deal with questions about the contracts of Mesut Ozil and Alexis Sanchez.

He spoke with James Olley of the Standard, who asked about the financial gap between Arsenal and City, before the questions turned again to the contracts of the two star players.

James Olley: You’ve made your position on Sanchez and Ozil, very clear, but is there any concern tha-

Arsene Wenger: No, there’s no concern. I answer you straight away before I get your question!

Olley: Their form has been great this season, particularly Alexis, but is there any concern that the longer this goes on their form may be affected?

Wenger: There’s no concern, not at all.

Olley: Why are you confident about that? It is becoming a bit of saga, isn’t it? Being asked every week about Alexis and Mesut.

Wenger: Yeah. But you waste your time, because these players have 18 months and I don’t see why there’s this urgency in every press conference to ask these questions. Maybe you lack a bit creativity in the newspapers and you come up with the same subject, but I don’t see what that should turn up in every single press conference.

He was then asked about the contract situations of Olivier Giroud and Francis Coquelin, and like the others, would not give any details after stories emerged this week that the duo had agreed extensions to their current deals.

It wasn’t even the first time he had a little dig at the press during the presser. Earlier he’d been asked about Ronald Koeman’s comments that he always blamed the referee when he lost a game to the Dutchman.

“Concerning the referee, I don’t agree with the performance of the referee against us at Everton on Tuesday night, but I didn’t say a word about it,” he said.

“It’s the old trick that the young journalists who are ambitious do. They take a lie into the question for the next manager, and hope he responds to it. If you read well what I said after the game, you will see that I didn’t say a word about the referee.”

Which, to be honest, is a little off the mark. In the post-game press conference, while accepting it was his own team’s fault that they lost the game and not the performance of the referee, he said of the award of a corner that ultimately led to their goal, “I am really disappointed because Clattenburg was in a really good position to see that they headed the ball on and it’s not the first time we are unlucky with this decision this season. Overall, I do not want to speak about the referee too much, it’s not my problem.”

Immediately after the press conference, a young ambitious journalist got on a train to Manchester to ask Pep Guardiola if he had any response to Wenger’s assertion that the Spaniard was a massive fan of Stan Collymore.

Claiming that Özil wants Draxler in Arsenal as part of his contract renewal is showing creativity, in my opinion.

Haha not a word. ‘How to be creative’ by Arsene Wenger, a New York Times bestseller.

It’s amazing how the media can whip a story into a saga and then bemoan a manager for not addressing this fictional saga which they created. They just create self perpetuating news, playing Chinese whispers with themselves and end up questioning Wenger week in week out why he hasn’t acted on it. Ridiculous. Do some fucking journalism people. I bet Harry Kane has got a penchant for beastiality. Go investigate that weird twat.

Personally I’d have these people executed for unlawfully egregious stupidity, how Arsene can take that with good humour is beyond me.

Seriously, what an asshole. I was going to comment on the same part, “aren’t you tired of assholes like me wasting your time every week”?

Yeah, Wenger wants to get them done. But what the fuck is there to do or say about it until and unless the club can announce extensions for one or both of them?

Journalists used to be called reporters. They reported the facts. Comment and opinion of said reporter never entered the equation. Now journalists want to set the news agenda. How else can you interpret asking the same question in every news conference about an issue that is really not the immediate concern if anyone. You hear interviewers after matches asking questions you know are designed to give their fellow journalists a headline for tomorrow. Are you disappointed with the corner decision? How do you answer that? No. I’m fucking delighted the corner was wrongly given. The profession stinks and it has… Read more »

This ^^ Well said.
Couldn’t have put it better.

You are talking about a small percentage of journalists. I have been a broadsheet football/rugby/basketball reporter for 25 years. I don’t report bullshit/lies or I’d be out of a job. The Ozil-Sanchez story is big, its about the future of Arsenal. He’s going to get questions. Arsene is very good with the press. Brilliant in fact.
Not all journos are scum. Only about 10%. And Piers Morgan.

You’ve replied to Al Gilmore, but you’ve put words in his mouth. He never said anything about “bullshit” or “lies” by journalists. You’ve done exactly what most typical journalists do — you’ve taken the base idea (i.e. criticism of journalists) and constructed an argument to support your opinion, regardless of whether it is missing the point. His point was that reporting “fact” is less important now than creating headlines, and that leading questions are used to goad managers/players into saying something that can be used for sensationalism. This is exactly what happened with Arsene Wenger — he mostly (almost entirely)… Read more »

“It is becoming a bit of a saga, isn’t it? Being asked every week about Alexis and Mesut.”
Well, you asked the bloody question, you little shitbag. Shut up or fuck off out of the press room if you’re so bored of hearing it.

To be fair, James Olley used to go on the Arsenal show with Tom Watt occasionally and seemed alright (sounds like he’s a closet Arsenal fan, as well). I think it’s just the nature of the beast in being a journalist these days.

Am surprised by that, as his piss poor coverage of Arsenal in the free London rag is always worth a miss. Perhaps, as you say, that’s just the nature of the beast.

If the concern is that “breaking the wage structure” for these two would prove costly because everyone else would want a big raise, then the recent (rumoured?) extensions for Koscielny, Giroud, Coquelin, with maybe one for Cazorla in the works, giving those guys raises first, could be a way of minimising or controlling the financial impact. I don’t know who else is out of contract in 2018.

The prese are writing with a little bit the handbrake on.

But if they can find one or two top, top, top journalists, they will do it.

You know, everybody thinks they have the prettiest story in the paper.

Can anyone translate that video below ? I dont know spanish.

Journalist says something along the lines of, Stan Collymore says you should go back to Spain with your tail between your legs, what do you think of that?

The only thing Stan collymore is an authority on is alleged spousal abuse.

That’s the job that anyone looking to take on a big club in the Premiership should look forward to. The press are something else! And if you are not careful with what you say, the FA are just around the corner to fine you. Wenger has the pedigree and quite frankly has strengthend the brand over the years. I wonder is it because his French and so successful?!! ?

Now,Pep might be the City boss these days, but Stan Collymore is a boorish, loud mouthed, self opinionated, shite hound and for Pep’s perfect and utterly dismissive response, I salute him.

As creative as Arsene Wenger’s when his predictable strategy on the field don’t work?

Reporter: you’ve sold a lot of players to City.

I just watched the press conference because I could not believe he really did say this. ??
Hilarious!

If I was the Editor-in-chief of a newspaper with so many imbecile journalists working for me I think I would have taken a leaf from the football world and looked to upgrade my team and replaced the deadweight with someone more creative and smart that dont just do copy paste journalism and when you do send them out on assignment they just ask the same fuckin questions every fuckin time like complete morons.

Outspoken Arsene not afraid to give the journalists what for. You show ’em, boss!