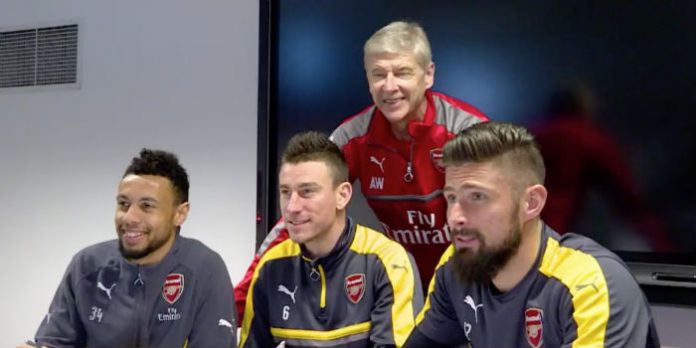 Arsenal have confirmed that Olivier Giroud, Laurent Koscielny and Francis Coquelin have all signed new deals.

Reports in recent weeks had hinted that extensions were on the cards with current deals for Giroud and Koscielny ending in the summer of 2018. Coquelin, who last signed in 2015, had been contracted until 2019.

“We are very pleased that three important members of our team have committed to us for the long term.

“Francis has made tremendous technical strides over the past few years because he’s so focused every day.

“Olivier has big experience in the game now and has become a more and more complete player since joining us.

“Laurent is of course a key part of our squad and I believe one of the best defenders in the world today. So overall, this is great news for us.”

It’s fair to say, these were probably the least tricky of the contract negotiations that are being undertaken at the moment. We await news on the Messrs. Ozil and Sanchez, while the futures of Alex Oxlade-Chamberlain and Jack Wilshere are also still up in the air.

Great news, rate all three of them, they all have important roles play.

Hope it encourages Ozil and Sanchez too.

Why vote this down?

I couldn’t find the “any” key

Coq’s even good at intercepting in the office – in the video he grabs both Kos and Olly’s contracts to check he’s on similar money! Haha…

Kos should earn as much money as Ozil and Sanchez but he still doesn’t have a big name in the media.

No central defender, no matter how good, earns as much as the equivalent-quality striker.

Clearly the ball is in Arsenal’s court regarding both Ozil and Sanchez so we will have to probably wait a bit longer.

Both players have said they are willing to stay and extend their contracts so here is to hoping club and agent can come to a compromise.

There is a simple way of showing your willingness to stay: You sign. Giroud, Kos and Coquelin just did.

Im with you, let them sign or leave, im happy with the players who want to be there. George Graham said every player has to feel lucky to be at the club or else the hunger goes and the whole squad suffers. Alexis especially clearly feels he is a cut above. Genuinely don’t care if he leaves.

sanchez gives all he can i think.So u wouldnt care if he went to china

I believe that Arsene wants to sort these players contracts out first, so when they pay Sanchez and Ozil there extra money, these guys can’t go knocking on his door for similar contracts themselves!Get these signed up inside budget and go over the top for Sanchez and Ozil

that’s why he’s the boss!

Footie does need a salary cap though, but it would be impossible to implement across Europe and our league would probably end up losing more players to China.

Get in!!! Hope that pen runs out of ink by the end of the window! Mesut, Alexis do your finger stretches

Let’s not refer to French people as frogs.

This isn’t completely relevant but after the Preston game I text my friend (Everton fan) asking if, to a non-Arsenal fan, Giroud was a dislikeable player in a Diego Costa kind of ilk. His reply: “Absolutely. It’s the exaggerated movements, celebrations, media interviews… every time he speaks, I feel each word is prefaced and bookended by an ellipsis. He feels the ’90th minute goal’ is his birth right, and if you were to attribute him with qualities they would first and foremost be aesthetic. Giroud oozes sleazy, artificial confidence – on the surface, a smooth connoisseur of dialect, passion, women… Read more »

I find this view of Giroud quite surprising – I would have thought he was one of our likeable players. But if this is how he comes across, it would totally explain the raw deal he gets from refs – perhaps they take against him from the start.

He’s hardly as bad as Luakaku…. I can’t stand that lad. Joins Chelsea at 18 and cries about not being given a chance. Scores a few goals out on loan and demands to be given games when he’s clearly not on the levels of someone like Costa. Gets a move to a mid-table club in Everton, scores a few goals, then him and his dad mouth off every transfer window about clubs like Bayern, Man Utd and Real Madrid wanting him – he clearly wouldn’t get into any of these teams either. Talk about birth-right and being entitled, Lukaku is… Read more »

“Lukaku is one of the most deluded players I’ve ever seen”… Do you know a certain Nicklas Bendtner?

“Scores a few goals out on loan ” he scored 17 goals and got 7 assists in 35 games on loan at west brom. that’s a hell of a season. the next season when he wanted to start for chelsea, they had torres, eto’o, demba ba, and schurrle as their strikers, so he had an obvious case. “he clearly wouldn’t get into any of these teams either” ted knutson thinks he’s top 20 in the world ( http://statsbomb.com/2016/11/mailbag-liverpools-defense-how-good-is-lukaku-craft-beer-and-more/ ) and that’s at age 23 with plenty of room to grow. this kid is very likely to play somewhere bigger than… Read more »

My missus likes him…

Opinions aside…I find it hard to believe a scouser could articulate so eloquently.

I’m sure if he was English they would love him.

I’m afraid the ox and wilshere need to earn a contract.

The Ox has had a decent start hasn’t he? And wilshere is getting his fitness back and is the outstanding player in a mid level premier league side. They’re doing ok. Why has it become fashionable to constantly have a go at the British players?

Wilshere has the 1 assist so far which led me to believe that maybe, like ozil last season, he’s supplying millions of key passes but the strikers aren’t finishing a lot of them.

A quick check on who scored.com says he’s averaging 1.5 key passes per game…..

You form your opinions of a player’s performance based on what it says on scored.com?

No I form an opinion (“Wilshere is not producing goals or assists but maybe he has many key passes” for example) and then I go to stats websites to validate the opinion.

Love how we get countrymen to sign deals at the same time. Reminds me of when we got Gibbs, Jenks, Wilshere, Ox and Ramsey (OK British not English) to sign on the same date. Have we got any Chileans in the youth team?

Don’t worry. We have long term contracts lined up for Atom and Humber.

why not make Sanchez’s dogs the team mascots? Doesn’t Crystal Palace (or someone) have an eagle/falcon fly around a bit before games? Alexis would surely sign after seeing his dogs run out in Arsenal colours…maybe with capes on too!

Glad that our first team French trio has penned new long term deals. Does this mean Wenger’s contract is in the works as well? Although I’d appreciate the stability that’ll bring, I think the Wenger out brigade would have something to say about that.

We are still waiting Wenger out brigade!

Wenger Out! 0 league titles in the last 12 years. There you go.

Why not
Reply to  shokim

They have something to say about everything.

Some punctuation would help, especially a comma between “Arsenal” and “money”. I first read it as “they really love Arsenal money”, which wasn’t the point you were making, I think.

Sorry arsehole maybe someone like you dont get what I meant..

You could do with a comma after ‘arsehole’ and change ‘dont’ (spelled incorrectly BTW) to ‘doesn’t’.

Yes they do, the evidence is the wages that are getting for this extensions are laughable compare to ozils and alexis not to mentions players from other big teams. I read that with the new extensions Kos signed for 90,000 per week, giroud for 80,000 and coq for 70 000. If kos was at city he would have earn 200 000 easily. And to add top of that probably this is the last contract for kos and girod kos has it till 2020. And if anyone comes as best players after alexis and ozil is Kos. Take a note alexis… Read more »

Bosscielny certainly one of the best defenders in the world. Still highly underrated.

Mertersacker and giroud are d critical/weak links in our defence and attack. Giroud is only good at scoring from crosses.he gives the ball away to opponents 7 out of 10 times,he cannot create chances and score on his own if he doesn’t get supply. We need an all round striker like aguero,Suarez or Sanchez and we hav got Sanchez.wenger should stop starting giroud and start Sanchez instead and bring in giroud late in games that the opponents are sitting back to defend. As for mertersacker, he should leave our club in the summer.

so there have not been so many games Giroud did not start or play at all that we didnt lose or those we won eventually BECAUSE of him?
WOW……. opinions?

Damn, I missed the ‘Cross’ that led to Girouds goal at PNE….

Great news. Happy that all 3 have signed on. Coquelin has demonstrated he can be more than just an aggressive leg breaking DM. His high pressing and better positional sense have played a big part in some of our convincing wins already this season. He is a guy you want on your team, never goes hiding in games. Koscielny is quite simply one of the best CB’s around. We should all be glad he has the confidence in this team / squad to stay and play into his prime at Arsenal. Giroud’s extension is probably the best out of the… Read more »

Is there any club in the world who wouldn’t like Giroud as a second choice striker to come off the bench? What a luxury.

If only Ozil and Sanchez were French

Im glad those players are staying on its good for the club , but even better if ozil and sanchez did the same thing come on guys

I would love if Sanchez and Ozil extend their stay at Arsenal. Wenger should do everything possible to make them extend their contracts.