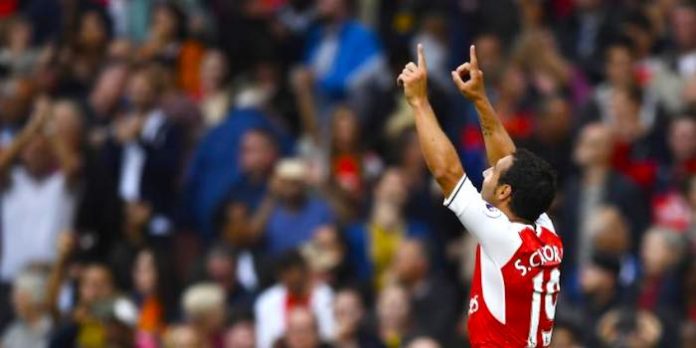 The decision to extend the 32-year-old’s deal will come as a boost to Santi who hasn’t played since November after undergoing surgery on his Achilles. Wenger confirmed last week that a recent follow-up procedure means the midfielder is at least six weeks away from making a return.

Since joining the Gunners from Malaga in 2012, Cazorla has scored 29 goals in 180 appearances. As stats-guru Orbinho reveals, he’s also been integral to our success on the pitch during the last five years, providing a vital link in the midfield.

Arsenal Premier League win percentage with Santi Cazorla starting this season 86%, Without him 46%

Arsenal win percentage with Cazorla starting since Aug 2013 – 66%. Without Cazorla 44%

He also has a lovely smile.

Arsenal yesterday confirmed that Per Mertesacker, who also had a similar clause in his contract, would also be staying for another season.

Props to the team at Daily Cannon for spotting Santi’s registration!

Good news. Let’s pray for his fitness to come back in full.

Love him as a player, when he is playing.

Me miss you Santi, we miss you.

Get well soon you little bunny.

Just to add (to win % and lovely smile) he is also the sort of player people pay to see. I’m not comparing him to either but for Arsenal he has been a mini combination of Xavi & Iniesta. Like Tony Soprano wanting to stop and smell the roses, next time we see Santi, regardless of how the team are doing, take a minute to appreciate the maestro.

Beat me to it!
Happy birthday, sant carzor!

Fantastic news!
I would put him on an open contract, that only expires the day he retires.

Interesting that according to the FA document Kos’ contract was signed in the middle of December, about a month before the club announced it.

Do you think maybe it has something to do with all the media and promotional videos the Arsenal media team and website upload when a signing has been made?

A part of me thinks so

One more season but we will start to have to look for someone-else who can be as articulate in the midfield.

We miss someone who can hold the ball so eloquently and dribble in tight confines.

I dont believe you are the real santori. That was waaay to short.

The answer to this is going to be expensive, as bearded Spaniards who play for Real Madrid named Isco are in short supply.

We miss him so much. Just pray surgery went well,recovery goes well and speedy. Then back on the pitch with both feet doing what they do best.

favourite player of the emirates era

Wonderful news not just because we love him but also because Arsenal believe is going to come back ok clearly, no?

I think arsenal is waiting for his return to the pitch so he can properlly celebate his extension.

If we were to take those win percentages at face value, our season would definitely be over

I don’t normally read much into these statistics about one player impacting on results, but those percentages are pretty huge..

Hope we can get the little magician back soon.

I love Santi and think he’s instrumental. But I wouldn’t put too much stock in those win percentage numbers. For one thing, the 2016-17 sample size is way too small. Second, we don’t know the quality of opposition faced with him and without him.

Great news , we really do miss u mate , arsenal love u , nice person , great player all the very best.

It’s nice and all, and I’m not a physio, but I wouldn’t expect much from Cazorla at this point. Achilles injuries are extremely difficult to come back from. Ruined Vermaelen. Cazorla is no doubt a good influence in the squad but Arsenal need to learn how to thrive without him on the pitch.

Really? Isnt this just a list for players that will play in the second half of the season? He’s “6 weeks” out from training and the season ends in may. Wouldnt that make more sense and explain why there is no annoucement?

This is good. We can’t count on him as first choice anymore, but what a terrific option as a squad player.

According to the FA list, both Santi’s and Kos’s contracts were registered with the FA in December, before Christmas. Of course, there’s nothing to indicate what the terms of those registrations were; but one can only assume that the Koscielny contract was the extension under new terms announced recently, and the Cazorla contract was the club taking up the option for the extra year. I know the Club are under no obligation to announce such things as they happen, and that both Le Prof and the Board always like to keep their cards close to to their chest; but we… Read more »

He is the main engine of our team and his injury has really affected us.which him a speedy recovery.