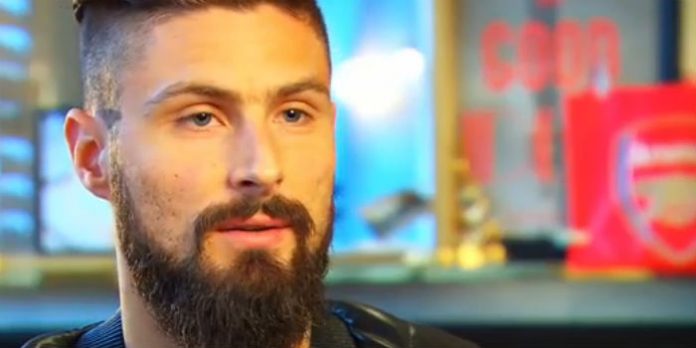 Olivier Giroud has revealed he’s on the verge of putting pen-to-paper on a new contract at Arsenal.

Signed from Montpellier in 2012, the striker has gone on to score 91 goals for the Gunners at a rate of 0.44 per game collecting two FA Cup medals along the way.

“We’re on the verge of reaching an agreement for an extension,” the 30-year-old told Telefoot in a programme televised at the weekend.

“It’s also a sign of confidence and I want to continue my adventure here in this Arsenal family, and I feel very good here.

“When I spoke with the manager, he always kept telling me that I’m an important player. I know what I’m capable of and it’s just a case of being patient, working hard in training and waiting for your hour to come.”

Giroud’s current contract ends at the end of next season.

The striker also reflected on his scorpion kick goal against Crystal Palace, a strike that continues to fascinate the media in his homeland.

“It’s something you’re not used to doing every day. I wanted to hit the target but of course there’s a bit of luck, because you can try it 50 times and it won’t be the same.

“The flight of the ball is perfect and it’s an even prettier goal because it goes in off the bar, that makes it even more impressive.

“Then you realise that it was something crazy. [France reserve goalkeeper] Ben Costil send me a video of it, singing a song for me, Andre-Pierre Gignac wrote to me about it.”

Well to nitpick, Giroud did join us after winning the French league with mighty Montepellier.

Why not
Reply to  Cliff Bastin

We need him. There’s no one who brings the same qualities in our current team. And he is not complaining for lack of starts either. Top man.

HFB has been a great acquisition for the club.
He may not quite be in the league (as a player) as Ian Wright, TH14 and RVP, but completely different level in terms of class, commitment and goals to other recent strikers Adebayor, TGLS etc… I think Arsenal history will judge him alongside the likes of Alan Smith: a great Arsenal striker who won us a lot of games.

Alan Smith
A goal and an assist at Anfield, May 1989.
He always seemed to come up with a goal

Giroud has been excellent – in behaviour as well.

Not complaining outwardly when on the bench, but voicing his displeasure to Wenger in private and working hard to convince him to give him more minutes – and then backing it up with goals when he played.

Important player for the team and hopefully will stay on with his experience.

Love him and Kos. Hate all this world class bullshit. His build up play is fantastic, his aerial threat top drawer. His attitude even better. He scores consistently against big teams for Arsenal and France in Europe and domestically, and works his hole off. Now has now added hugely important last minute winners to his scrapbook. Consistently 20+ goals a season striker in the toughest league around. Also occasionally provides us with art (see scorpion or assist to Wilshire vs Norwich). What more do you want?

Giroud is a simple mature striker who does not complain despite the situation.Huraaa Giroud.

Understanding a big part of what is happening here is likely tied to the current sports/business environment. Wenger wants to stay. Ozil,Giroud,Cazorla,Mert, Koz etc. almost every player wants to stay. The owners want them all to stay and Sanchez may even want to stay, but not sure. The issue is how fans react at the end of the season. The Mob who place winning league or CL over how we play and how we act….they now control the situation. It is a microcosm of Brexit and Trump as related to our Club…God Save the Team!

Form is temporary, Class is permanent

I agree with all your points! Though I would have appreciated some punctuation 😉

It’s ridiculous the criticism this guy has had over the years, he’s always given his all and scored so many important goals,for a few years we did need another striker but purely for depth, never to replace giroud

Don’t forget the shift he puts in at the back when required. How many free kicks and corners has he headed or booted clear over the years?

Giroud is not world class…nothing wrong with liking him, to say his world class is crazy…he’s a decent striker..a level below top tier. Simple

I think Arsenal want’s Giroud to continue his Arsenal adventure too.

I remember before Giroud arrived, for a few seasons not only we’re so non threatening at corner kicks, but everytime we got them, 2 seconds later it’s usually the oppositions who actually had a shot on our goal. Madness. Now I thank Bergkamp everyday that nightmare period is over since our HFB is leading the line.

If I’m not wrong, his rate of conversion is one of the best in the Wenger era. GOes to show you most people who whinge and moan really don’t bother to look at the facts. Aside from an aerial threat, GIroud has plenty to offer with his game. He is adept at playing the more mobile asets around him into the box with sublime touches. He also scores plenty of goals through feet. If the scorpion kick was Zlatan’s the media would be wanking off to how “world class’it was never mind there is a similar percentage of luck involved.… Read more »

Genuine question: Can someone define what world class actually mean? I mean France are a top tier team and so is Arsenal…does that not make Giroud and other similar Gunners top top players? and I’m not really interested in Shearer’s opinion on what a world class player is…he wouldn’t know one if he mugged him down White **** Lane…

Every Giroud goal is a special one. He hardly scores scrappy ones (Bayern home last season comes to mind).
For me, he is one of the most stylish finishers football has ever had. Giroud is an Artist.