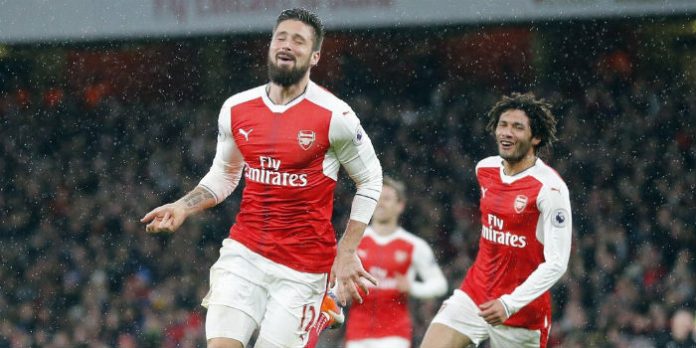 Olivier Giroud has joked that his scorpion kick goal is obviously better than that scored by Manchester United’s Henrikh Mkhitaryan because his effort wasn’t offside and came with a lovely ‘off the bar’ garnish.

Despite being pleased with the palpable quality of his goal of the season contender, the Frenchman revealed that his teammates had been quick to keep his ego in check by declaring that they preferred last week’s strike by the Armenian.

“Yes [mine is better], he’s offside and he didn’t clip the bar,” he told L’Equipe* [paywalled] while laughing.

“In the dressing room, the guys were shouting and said the one of Mkhitaryan was more beautiful, but no, mine is the most beautiful.”

Speaking to Arsenal.com, Giroud went on to admit that the goal was definitely the best of his career to date.

“It’s not difficult to say that is the best one, because I think I needed good help to score this goal.

“Thanks God, I was a bit lucky but it was the only thing I could do. The ball was behind me and I tried the back heel and obviously, after that, it was all about luck.”

Roma extend Mkhitaryan loan, with next season a possibility too

Mkhitaryan opens on up his relationship with ‘very tough’ Raiola

I agree. Does that mean I have to eat Ibra’s balls?

You know there are 1,500 different scorpion species in the world and yet only 30 of them have potentially fatal stings.

That one was a stinger.

Feel as lucky as him to have seen it live.

Would love it if we go on a run now and Chelski and the spuds draw. I still BELIEVE.

As i read this I heard the guy playing the sax in the lost boys,I’m old.

Totally agree, that was just what we needed to get the new year going. We’re 9 points behind Chelsea it’s very doable. If we can just get a win today then we can rest a lot of players for the FA cup tie on the weekend. I get the feeling this ‘flu’ Ozil is suffering from us Wenger giving him a winter break. I don’t want to be ridiculous but remember how far behind we were the year we won the league at old trafford. Our 35th game is at Sh*te Hart Lane…think about it, we can win another league… Read more »

Is the best for sure

“In the dressing room, the guys were shouting and said the one of Mkhitaryan was more beautiful, but no, mine is the most beautiful.”

Never showered with either of them, but I think we all, in our hearts, already knew whose is the most beautiful.

Headline of the year.

Yeah if you were in his team you’d totally rinse him wouldn’t you? You’d be like that goal that bloke scored off that beach ball was better mate, jog on.

Nah but really it was pretty good fair fucks

If you were to create a video compilation of Olivier Giroud’s top 10 Arsenal goals, you would find some pretty stunning stuff in it. He’s approaching 100 goals for Arsenal now, and you have to say he’s been a very good player for us. You can see how much he loves the club and I hope he can keep scoring.

Very true. He has scored some remarkable goals. Some subtly so. Others, not so much.

Of his top 10… 7 of them would have been the scorpion kick ?

Honestly most goals line this and so.e of the long range ones are hit it and hope for the best. However .. With experience and skill the chances of making a proper connection rise. But still a bit of luck involved.

I may be wrong but think I heard Giroud say to the BBC guy: ” I needed God’s help etc…”

Great goal, though I’m sick of his showboating goal celebrations. Too over the top.

As long as he scores, who gives a shit. Most other players would have done a whole lot more than sliding on their knees and pointing if they scored that goal.

You just know they all spent half the warmup this morning goofing about doing scorpion kicks.

HFB admitting he had divine intervention with his ‘thanks God’ comment on that lovely piece of back heel magic. Goal of the season for me. <3

I appreciate it when players thank Bergkamp for his help. It is meet and fitting to do so.

Just when i thought i couldn’t more gay for the HFB he goes ahead and scores a goal like that!

Nitpicking point though, isn’t a scorpion kick meant to be both heels a la higuita?

Great goal 3 points just what we needed love it