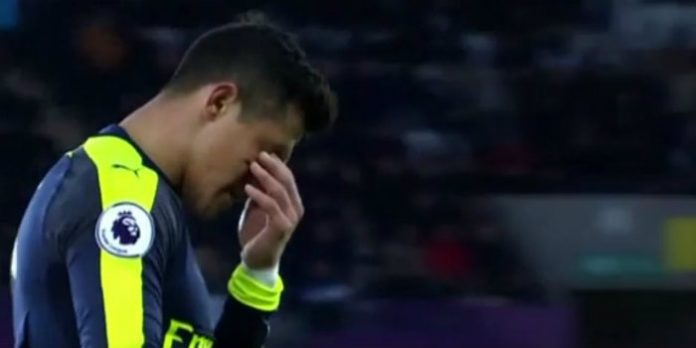 Arsenal ran out 4-0 winners at the Liberty Stadium today propelling the London team to 3rd in the table and sending foreigners Swansea down to 20th. The scoreline shows an imperious Arsenal but the underlying stats tell a slightly different story of a scrappy contest which took Arsenal forever to get started in and which required two own goals for the rout.

In terms of shots, Arsenal owned a slight advantage 12-14 but the Gunners didn’t take a shot until Alexis’ long range bomb in the 27th minute. Arsenal had several periods where they struggled to find an opening in this match and the resultant shot domination chart looks like this:

Swansea’s shots chart looks nominally better than Arsenal’s in the first 35 minutes but all of those shots were from outside the 18 yard box and thus low quality shots. Swansea, for their part, were universally awful throughout in terms of shots taken with the exception of a four shot outburst between the 61st and 65th minutes.

But Arsenal weren’t really much better. I divide the game into 18 five minute periods and Arsenal only took shots in 7/18 periods with the other 11 periods fallow. And most of their shot-quality superiority came from those two leaps in the 36-40th minute period and the 51-55th minute period. And I artificially inflated those two periods by counting the own goals as two shots for Arsenal. Despite the huge score-line, there were huge periods of this match where Arsenal toiled with no end product.

The passes chart shows similar periods where Arsenal struggled to find a rhythm.

Arsenal’s first goal came in that 36-40th minute band where the Gunners had one of their most productive passing periods. And both Naughton’s own goal and Alexis’ fourth were scored when Arsenal were completely dominant in this match. Arsenal may have toiled a bit to get their shots in but they were far from “undeserving” of the win.

One of the reasons Arsenal struggled to create with their passing is because Alexis was having an off day. He is already Arsenal’s 2nd worst passer this season (behind Giroud) with a 74% completion rate (his lowest in his career) but today was a particularly poor outing with just 65% of his passes on target. You know you’re having a bad day when you’re passing completion is below Giroud, who is possibly the worst passer I have seen at Arsenal and who has a career passing rate of 67%.

Alexis’ passing rate has taken a dip because he’s both been played as a center forward and because he’s been asked to play the creative role this season. He leads the League in Key Passes from open play with 55. But on a day like today, against a Swansea team threatened with relegation, he created just two shots for his teammates. Meanwhile, Özil completed 85% of his passes and had three key passes and Iwobi created two key passes with an 89% completion rate.

Alexis was also dispossessed 4 times, three of those coming after the 55th minute and two of them just before he was taken off.

Alexis didn’t like being taken out of the game but his poor pass completion rate, combined with his turnovers, the reality of him needing a break, and the fact that the game was already well won, were all good reasons to sit him.

I keep hearing we’re predictable in attack and yet we’ve still scored the joint most goals.
We’re terrible at defending and yet at the end of the season our defensive stats usually stack up with the best.

4 – the number of goals and assists that Swansea got, despite losing by 4.

Both the first and last goals came off a Swansea player before we scored, both were set up very nicely for us. Plus two OGs (not Olivier Giroud’s).

If they can start doing that at the other end they might get out of trouble.

Man of the match: Alex Iwobi

Wonder how many fouls Naughton had, the muppet.

Enough to deserve scoring a clanger of an OG.

Interested to see the figures for Alexis’ pass completion rate, which confirms my subjective impression over this season so far. He’s such an amazing player in so many other respects, that I just feel if only he could improve his passing he’d be up there with the legendary best, or even better. What is so exciting, and at the same time frustrating, about this Arsenal team in general, is that there is such obvious room for improvement, yet we’re still right up there with only one team any real distance ahead of us. COME ON YOU GUNNERS! (you can do… Read more »

there was this one time Alexis crossed the ball into absolutely fuckall, just crossed the ball straight out of play. and there were so many options. but even on his off days he still bags a goal. he just needs to grow up and stop throwing tantrums when he’s subbed off.

Every genius has his foibles. I do agree, though.

Perhaps Sanchez had his head down in disappointment because he knew he was screwing up so many of his passes. And he already has set such high standards for himself.

Still not bad for an “off day” if you ask me. Thought we looked clueless going forward for the first half hour of the game.

Alexis did set up a very good chance for Ramsey which he should have scored from.

I’m starting to wonder if maybe the reason we struggle so much at the start of games lately is because we basically have so many players with different skillsets that don’t necessarily complement each other (I.e playing giroud with very little width in the rest of the squad or having ozil, Ramsey and iwobi with free roles of varying degrees which means they end up occupying the same space a lot of the time) wenger’s free form football means the team essentially has to spend most of the first half of games trying to solve problems and provide solutions on… Read more »

Giroud’s the worst passer and Alexis the second worst??
I haven’t looked up the stats but won’t passing %s be lower for forwards everywhere, especially those that attempt to be more creative like these two?

How do their rates compare to other forwards, given each teams’ overall passing rates?

A Different George
Reply to  Goonerist

Sure–the player with the highest pass completion rate in many teams is often a centre half, most of whose passes are very short, across to the other centre-half, back to the keeper, or to the covering midfielder.

Alexis came out mad cos he did know they didn’t play well against a relegated team, and with 2 own goals, he’s very self-critical.

can I just say that you are doing an excellent job woth this column and I always look forward to them. I am studying statistics and I hope one day I can use it in a way that’s as fun as this.

We need to be more direct..

Hi mate, nice analysis as usual. One thought: it might be worth trying a different presentation format for the second chart. 0 to 90 mins going upwards seems unintuitive – why not switch axes so 0-90 is L to R on the X axis. Also, having side-by-side bars on a timeline makes it seem like Swansea go ‘first’ the Arsenal then Swansea again etc.. Although they’re not continuous data, possibly a line plot with marked points would be clearer? This way you could see the individual team progression and relative dominance between them. Like the first gaph, basically.