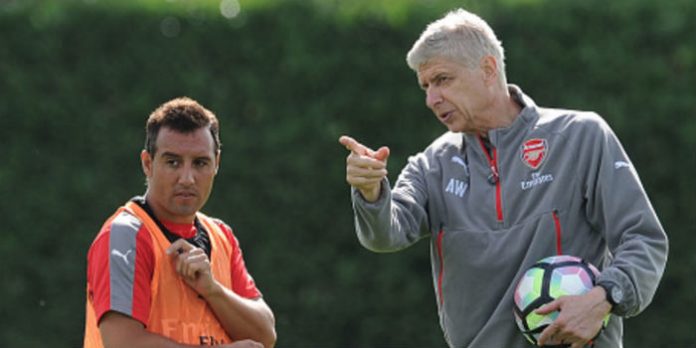 Arsene Wenger has cast fresh doubts as to whether or not Santi Cazorla will play again this season by saying the Spaniard is ‘far’ away from a first team return, and that the Spanish international’s recovery is not going as quickly as expected.

The 32 year old limped out of the 6-0 Champions League win over Ludogorets in October, and underwent surgery in December to correct a chronic Achilles issue.

Asked today whether he was likely to make a return any time soon, the manager said, “At the moment he is far.

“It’s not going as quickly as I imagined it, so certainly in January he will not come back.

“It could be a bit longer [than three months]. I just have the schedule that at the moment he is not planned to go outside and run.

“Once a player goes outside and runs without any problems, you count six weeks, at the moment he has not been out so that’s why I say in January he won’t play.”

On what we miss without him, Wenger continued, “He’s such a great player, because he started the season in such a tremendous way.

“He was the dominating player in our squad at the start of the season and we suddenly lost him.”

All we can do is keep fingers crossed the setback isn’t as bad as it sounds, but it does look like it’s going to be some time before we see him back on the pitch.

Definitely been a big miss since the injury, we’re poorer without him! Need him back asap

Or we need Cazorla Mark II in this window itself…

I don’t think there is a Cazorla MKII aside from his severely underrated technical ability but his maturity just makes him invaluable. He makes the already great Ozil and Sanchez better, no one else in our squad can do that yet or at all. Also he is a final third player who adapted very quickly into a deep lying midfielder. All of those factors are unique to himself. Last year Cazorla’s loss cost us the title in my opinion and this year we have really missed him and could well lose any hope of a title shot soon.

One way or another we need to address Carzola absence.

If we can find an external solution we have to improve on the internal solution because it’s not working like it was at the start of the season with Carzola playing.

Again shows how quickly thing can change, from having so many options for the CM position, we are now depleted! The Wilshire loan that seemed reasonable when it happened doesn’t seem so now.

Ca-ZOR-la. It’s not that hard.

Okay, I know I’m going to be slated for this but for me, Cesc Fabregas would be a natural and instant replacement.

He wouldn’t be “instant” in the sense that if he’s available at all, it won’t be in the January transfer window.

To be honest, I could actually see this happening and not entirely sure how I feel about it.

How many points do people think we’re going to drop with a midfield of Ramsey and Xhaka?

That would be more apt I think, but your sentiment is sound just the same

So let’s see. We lose 2 points against Bournemouth, Coquelin is out, Perez has an ankle injury, Koscielny has a thigh injury, Özil is still sick, Elneny is at the AFCON, and now this Cazorla setback. All this in a week. Well I guess everything will be alright if Welbeck suddenly becomes Henry when he comes back.

For a club this size, what with the celebrated ‘depth’ and incredible youngsters,’ there is still no excuse to not beat Preston. Gotta be patient with Welbz. He’s definitely going to be ‘like a new signing’ once the big matches start coming thick and fast.

Jeff Reine Adelaide should come in and do a job.

Another familiar story for Arseblog to run, isn’t it?
It’s the same every single year….the injuries, the questionable attitude, the implosion in big games, the top four scrap, the inevitable early Champions League exit, the contract stand off with our better players, the raising and crushing of hope….nothing changes because Wenger is still the manager.

Make mine a Swiss miss
Reply to  Shonky

You forgot the endless whining

vicksonthechest
Reply to  Make mine a Swiss miss

Shonky
Reply to  Make mine a Swiss miss

The truth cuts like a knife once again into the permanently deluded.

You’re 100% correct. And people downvoting your comments shows large numbers of our fanbase are still deluded.

Mods, can I change nicknames and reply ‘You’re 100% correct.’ to my posts?

Can anyone remember Chelsea having consistent injury problems?

Robben? Essien? Kalou? Duff? Forsell? Zouma? These are some pretty injury prone players. That said Chelsea were also blessed with a good pedigree Lampard, A(ss) Cole, Terry, Drogba who weren’t only BIG championship-winning game players but also extremely fit in their prime. Now they aren’t in Europe… Meanwhile we have had faith in talents of Wilshere and Santi, AND stood by Ramsey and Diaby post their horrific injuries, among others. I’m all for better fitness training and medical staff AND naturally fitter players. But I wouldn’t want the current niggles OR the fixture pileup to be used as an excuse.… Read more »

Kalou and Forsell…haha! Hilarious stuff…..haven’t heard those names in many a year.
I’d say Robben, Essien and maybe Duff are the only three first team players there. In 13 years?!?!?!

Hazard was out for the majority of last season… Most of their key players seemed to be actually.

Hazard was feigning injury because he hated Mourinho….JM gets the sack and…..hey presto!!

u think its ok for arsenal to play on the sunday then the tuesday , mean while spurs the wankers get the extra day

If we can’t get Jack Wilshire back, then a signing might be required!

If we still had Abou Diaby, at least we could have mined him for parts. Graft his Achilles onto Santi and away he goes

That Sounds like the pre-announced death of his cruciate ligament. Diaby must have been conceived atop an ancient graveyard, so cursed were his legs.

Cazorla’s skill set is essential to the way we play in a number of ways. His vision and passing make opportunities and help unlock packed defences. His close control and footwork opens up space in tight areas that can get a move going where most other players couldn’t. We are much stronger with him and I hope he plays many more games for us. But if he can’t, we should starting thinking about an alternative – who do we think is the best replacement? Payet? I think he could do a Santi and transition effectively to the deep-lying playmaker role… Read more »

(A man can dream)

Someone somewhere mentioned Pjanic. (How injury prone is he?)

Verratti and Pjanic are the best options. We need to start thinking of a replacement NOW.

You think it’s time to hit the Pjanic button?

Always tough Isco would be great for the job. And he is short

I like Payet as a player, who wouldn’t really, but not sure he could replace Santi.
Jack’s the obvious internal choice if only he was reliable physically and i wouldn’t mind a XhakaJack midfield pair in an ideal world.
But he’s a risk even if he comes through this season with Bmouth.
The other one at Wham, Lanzini maybe or the little tub at Stoke, Xhaqiri.
You’re right though Santi will be hard to replace.

If we’re talking replacements for the position, I’d say Toni Kroos (yeap, I know it’s not gonna happen but let a man dream).

He’s too similar to Xhaka, no? If we are dreaming… why not a Rakitic, too?

Kroos is very over-rated: many useless passes don’t make a player great. He has no offensive impact and i can tell that Santi is far much better! But Santi plays for Arsenal and not for Real….

Gutted for Santi… and ourselves.

just hope the surgeon was a really skilled one. I’m getting worried now. Santi is my favourite player at Arsenal, both for his ability and his attitude. Nobody else we have is remotely in his class. Xhaka is very raw, the others not good enough.

Santi will be back for Liverpool away and then Bayern at home when , provided we’re not totally out of it ,the business end of the season begins and we strive for glory. 🙂

We can but dream..

We need to switch to a 4-3-3. That’s the best solution for the options we have in midfield. Coq getting injured makes things very difficult. Ramsey needs to be very disciplined and stop thinking he is Zizou.

He was always going to be the biggest miss, our game is so heavily influenced by him now, both his ability to pass with both feet switching the play quickly and his incredible dribbling from deep and tight positions.

If we want to play the same way we need as close a replacement for him as possible, in Europe I’m struggling to think of similar attainable players..I’m sure there are, probably not as good but with room to improve

It’s funny with some fans: when Arsenal beat Palace without Özil, it’s fantastic, we don’t need Özil, sell him, bench him, hang him and blablabla. But some fans forget Santi wasn’t there either…

well same old same old with Mr wenger same problem for the past 12yes the man does not help his players or the team on Tuesday night the team and his players were struggling did he make any changes to help the team no they continue to play the same way lucky for us a point gain.I hate to same this but I watch spurs last night I see a manager that help his team by playing a formation that help them beat a very good team.I bet you all when we go to Chelsea he going to play the… Read more »

It’s a different player every season. I thought we survived the November curse this year but we just subbed it off for December and January. Why do our players fall away like flies in the winter, especially when the going gets tough? I thought the new fitness guy was supposed to help with all that? Wenger has consistently shown that he can’t plan for a title winning season anymore. That’s pretty obvious now. This imbalanced squad has no replacement for Cazorla. The one option we had is at Bournemouth and that’s partly, ladies and gents, why we won’t get near… Read more »

Why didn’t they put a spare achilles in seeing as they were already in surgery, that way when one has a setback the other will be fine. Or a bionic achilles.

Fucks sake, should have been a surgeon.

Truth is every other manager in the top 6 would have probably changed formation and gameplan by now if they realised how apparently dependant their system was on one injury-prone player (against the top sides that is). Meanwhile we’ve been playing the same formation more or less since Adebayor left. Fucking mental