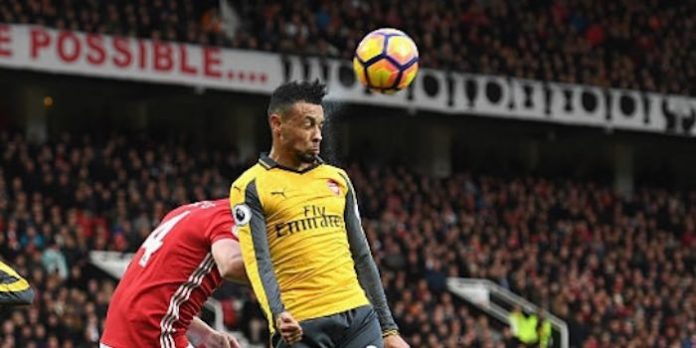 Arsene Wenger says that Francis Coquelin, who signed a new five year deal with the club yesterday, has improved technically as a player over the last couple of seasons, and picked him out as the one with the most impressive defensive stats.

The 24 year old’s Arsenal career looked like it was almost over when he was sent on loan to Charlton, but an injury crisis opened the door for him and he’s never looked back since.

Speaking yesterday, the manager said, “He has the best defensive statistics [at the club], his defensive numbers are outstanding.

“He has improved a lot and he is one of the players with the quickest speed in terms of passing – the time between him getting the ball and passing it is one of the shortest.

“He’s capable, we want to move the ball faster than anyone and he’s part of that.

“Technically I believe he has made tremendous strides forward compared to two or three years ago because he’s focused every day.”

Coquelin is currently sidelined with a hamstring strain, picked up in the 3-3 draw with Bournemouth, with the manager set to give a further update on his potential comeback at his press conference this morning.

Great to see Coquelin and others signed a new contract, i love the guy

What a monster! The light is on Kante and deservedly but Coq is not in that guy’s shadow he’s right beside him. 40 mil player if you ask me. One of the best out and out DMs in the game, the stats prove it

This may have been asked before but why is Coquelin never spoken of when it comes to the French squad?

Because the guys he is competing with are just not anyone… Lately it has been Kante, but then you have guys like Matuidi who can at a push drop down. Now Rabiot is emerging from PSG and has had a decent start to his international career. I should also remind you that Schneiderlin, when he came to ManU, was being considered. Short answer: lots of competition, and all of them in big clubs. Defensive midfielder is not a position where you need 3 guys. He is probably in the 3rd position. Actually I think he has a spot for the… Read more »

I agree. I rate Coquelin highly, but he’s not as good defensively or offensively as Kante or Matuidi. He still has time to improve and make that spot his own though, he has that determination to do well.

Defensively he’s as good as anyone, offensively is where he falls short of those two. He’s good at the quick short pass to get the break going, and can make the odd dribble to get out of pressure, but he contributes virtually in the long ball, creative or goalscoring departments.

I wouldn’t put it beyond him to add some of those things to his game though given how hard he works.

Is Kante that good offensively? Maybe I’m missing something, but he looks bog average to me (not that I’m saying he’s not good at what he does, though).

Compare him to Rabiot and (to a lesser extent) Matuidi and he doesn’t come close (I really like PSG’s midfield BTW – it’s criminally underrated if you ask me).

Who would you have more confidence in, in the final third to either create or get on the end of something? Coquelin..really?

When he is not really the creator. That’s Ozil’s job. He is THE DEFENDER

Really pleased he along with Koscielny and Giroud are staying on. Coquelin has been hugely impressive since his return and is getting better all the time. At the time he re-emerged as part of the set up there was a lot of talk about us finding the right kind of Defensive Midfielder that would suit our style of play and the club. Francis is that guy, knows the club, our game, been brought through on Arsene’s philosophy so it’s fantastic that he’s been able to cement his place in the team – a real success story even though at times… Read more »

Anyone fancy him making quick passes to Payet? Is he (Payet that is) greedy, ungrateful or just seen the light?

Payet.. Greedy – Yes, which is why if I was WHU I would be flogging his ass to China if I could for stupid cash. Ungrateful – unknown, he did call Belic a father figure to him last year when he one player of the year awards.. but actions speak louder and all that. Seen the light – possibly.. but I would also say he has delusions of grandeur. He had one good season and 1 good game the euro’s. He has been bang average this year at best. I think he suffers from the same thing Hendrick Larson did… Read more »

I would only take Payet on a loan – a short-term rental while Cazorla is out. While there’s no denying that Payet has some talent (although not as much as he thinks he has), his recent antics remind me a lot of Debuchy’s attitude towards Arsenal.

So underrated outside the club. Even the French national team haven’t picked up on his quality yet. Keeps him nice and fresh for Arsenal.

That guy knows how to win the ball back. The amazing ones are when he makes a tackle/challenge in proximity of a team mate, just to ensure the ball gets away to be collected/recovered by the team mate. Amazing.
…and how almost every one of his headers is an accurate pass, minus the clearances. I admire his contribution and get confused when he’s labeled “limited” by some. Not everyone is gifted everything.

Gd to know tt he has a short pass time. Ram definitely has the longest pass time in the team.

A role model in how he worked on what he’s good at to change the mind of his manager. Unlucky to be playing at the same time as several exciting mid fielders in the French squad. Hope he gets his chance there.

Great player but can’t help but feel we could improve on him. He’s fantastic at stoping attacks but he doesn’t BOSS the midfield like a Vieira or a Yaya.

Le Prof’s comments counter the narrative that Coq shouldn’t be on the pitch when teams press us. If the issue isn’t Coq’s passing, is it his or others’ willingness / ability to make themselves available for the pass? Other theories? We have definitely struggled against the press.