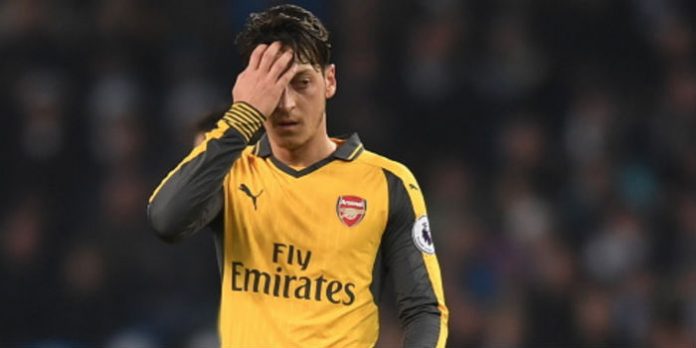 According to The Times (£), Mesut Ozil has been granted some time off to help him recover from an ongoing back problem.

The German wasn’t part of the squad for the FA Cup game against Sutton on Monday night, and Snapchatted a picture of himself on a plane.

The report says he’s gone back to Germany, having been given permission by the club to do so as we don’t play again until March 4th when we travel to Anfield to face the Mugsmashers.

Now, the cynical amongst you will say that a back problem is the most vague of injuries, a kind of cover-all when there’s something else going on. Unquestionably, some people will make a hilarious gag using the word ‘spineless’.

On the other hand, it might go some way to explaining why a player of undoubted quality has been struggling in recent months. After a great first half to the season, the 28 year old has become a shadow of his former self, and it does seem quite plausible that an ongoing fitness issue is playing a part in that.

Ozil is expected back in training this week, and despite the long period between games, there’s no bonding trip to sunnier climes, and it seems that there’s a lot of hard work and some measure of soul-searching to do on the training ground.

The fixture list is challenging to say the least. After Liverpool it’s Bayern Munich at home, Lincoln in the cup, a tricky away tie at West Brom and then Man City at home at the start of April.

There’s also a postponed match with Southampton to be rearranged, adding some congestion to the list in the final months of the season.

Hopefully his recuperation will help him get back to his best.

After the next 5 games, we will know which camp get more followers, Wenger in, or Wenger out?

Anyhow
Dear Ozil
Get better soon?
We are all in this together

By the way
Where’s Rambo?

Maybe the time off is to give the team’s back a rest from carry him….I jest….I jest

A million miles away from anything to do with the club, hopefully; his selection another indictment of Wenger’s lack of judgement with tactics and team selection.

Lack of judgement has lead to what? Quarter final of FA league title race and CL knock out stage??? If you hate Wenger what are you doing supporting Arsenal!!

He was injured at the end of Jan/beginning of Feb. They said 3 weeks out so hopefully he will be back in contention for the Liverpool game.

Might be better if he misses the Liverpool game. When we play away against the big clubs, having Ozil in the team is like playing with 10 men instead of 11.

A Different George
Reply to  spinner

I remember how he disappeared for Germany as well; the whole team struggled against Brazil because of him. I cannot understand how Jurgi Lowe–like Arsene Wenger–continues to select this obviously inferior player.

spinner
Reply to  A Different George

A lightweight player like Ozil, is balanced by physically strong combative (but also technically adapt) players which the German team possesses.
If you put him in with our group of players, you end up getting whopped 5-1.

Stillmatic
Reply to  A Different George

Low also doesn’t play him in the number 10 but out wide, specifically to compensate for his lack of defensive work, so is able to overload the midfield.

Something I’m sure Wenger would like to do, but Ozil has made it clear he’s only really happy playing as a no.10.

So where do we go from here?

spinner
Reply to  A Different George

We wait until the summer and let the new manager decide.

Poor bugger, carrying those other hapless clowns all alone ?

Clowns?? Alexis Koscielny Bellerin Mustafi Ox Walcott… These are best in league in their positions they have the most exprienced manager upon them. The only clown I see here is you. If you believe a team is full of clowns (unless 1 player) why dont you find another team already and be their shitty fan??

Haha. My winking emoji was easy to miss, I see.

Think you need to look up satire in the dictionary.

Get a grip Si

Back problem makes a lot of sense – after the way the Bayern game went, he doesn’t want to come back…Get well soon Mesut.

Needs a mid-season break? Or more resting during the first half of the season?

He basically had a mid-season break when he was ill over Christmas/New Year..

Being ill isn’t really a break.

Intense therapy in “trendy Istanbul restaurant” will sort his problem out then:

If only such treatment were available on NHS. Hopefully laying on his back will help?

That’s what happens when you’re a lightweight. Bring on the thumbs down hahaha

Maybe I’m being a bit of a stickler, but it seems that whenever Ozil has any sort of break between games, or even just the odd day off, he’s on a flight somewhere. If he needs rest, and particularly if he has a back problem, perhaps the best thing for him might not be to hop on a plane and travel. I’m sure there’s merit in arguing even something as minor as not sleeping in your own bed could disrupt your recovery

Not sleeping in his own bed in his Spanish house, UK house or German house?
Also an Hour or two on a Business or First Class airline seat shouldn’t be an issue.

Will the team go on a trainings camp this week like Liverpool did in Spain last week?

Good question, don’t understand the thumbs down. The answer is no, but the whole team got two days off after the Sutton match. Ozil, Cech, and one other player (Koscielny?) got extended time off.

Best wishes for a speedy recovery, we need you fully fit and firing on all cylinders. COYG!

I have a back problem that I have had for over 30 years so I do know what bad back pain is.

Looking at his demeanor I think there is something in this. The back is the centre of all body movement and debilitating.

I wish him a quick and full recovery.

think they should all have gone to somewhere sunny for a short break. Probably didn’t as the media and the shouty fans would crucify them as they’ve been serving up such rubbish lately. Nothing like the sun to make things feel better. Ozil hasn’t played well since his flu so hopefully the break will do him good.

Why would Wenger play him with a back problem going on? Especially when he was clearly struggling to have any sort of impact on games.

All it accomplished was leaving the team weakened, risk of further aggravating his injury and having Özil have to soak up alot of unneccesary Flak demolishing his self confidence.

The same reason he plays Kos when he’s obviously in pain, because we have nobody else fit to do the job. We have five right-sided central defenders and Kos on the left, and we have one fit Mesut. Don’t tell me Iwobi can do it, because he’s not ready for big games like Bayern yet, and it’s early days for the Ox in the middle. We need to have a more balanced squad, and while there will always be knocks and injuries we need to offload the continuously injured or average players like Ramsey and replace them with ones that… Read more »

Buckled from the weight of expectation.

Anyone remember what happened to Big Pussy Bonpensiero in The Sopranos?

He had a back problem…

I told you lot to get of his back, now look what you’ve done!

Poor Mesut can’t seem to catch a break from fans or the media (pun intended). This short time off will surely do him a world of good 😀

To me it don’t really matter where he goes to heal, or to sort out any other issues that are stopping him from playing like we know he can, what matters is him coming back in good health and playing the way we know he can.
We still have plenty to play for and some big games coming up,
If he finds his mojo and starts creating chances again with those pin point passes the whole team will benifit. I hope he returns on top of his game and helps us to win something.

I think someone at the Times needs to do a bit of social media research, I don’t deny Ozil has been given time off to recover, but he’s clearly in Istanbul going by his snapchat as opposed to anywhere in Germany.

He went to Germany then Turkey

This next 6 games should be what we are truly about!
Will we do a beyen?
Or will we push on?
Who fuckin knows! It’s arsenal!

I honestly think he needed to be dropped. Something needed to shake him out of his poor form. If this explains it, happy days, the cynic in me thinks he is being dropped for Liverpool, and this is a way of diverting media attention when it happens.

Either way I hope it’s the break he needs and he comes back to us the world class playmaker he is.

Is this one of those”injuries” we have seen players on the outs with Wenger gets? Lehmann, Almunia, Fabregas and Edu are some that hade injuries after falling out or being out of form for a long spell.

I pick the cynical options…

We need Ozil. He tends to go missing when the team is playing poor yes but he is the sort of player that will fashion opportunities for the team. What we need to do is find a better balance in midfield. With Granit back, I think Coquelin can afford to push higher and closer in tandem with Ozil patrolling in a 4-1-4-4-1. When we played Bayern, he sat too deep in a 4-2-3-1 and that invited them in. Coquelin is best when he is aggressive turning the ball over higher up the pitch. With the 4-2-3-1 against Bayern, Ozil did… Read more »

Reasonable analysis, but I seriously doubt we’d be able to get away with a 4-1-4-4-1 formation … although, Bayern were so good the other night that may be the only way anyone can beat them.

Very very generous to say Ozil had a strong first half of the season. His form started to dip in October.
Arseblog’s premier league ratings for him as follow from 22/10/16:

Not terrible, but goodish at best. And I mighf add I would tend to rate Ozil one point lower than Arseblog on average.

Ozil had a strong first third of the season.
Just not good enough.

He’s a quality player and needs a bit of rest. And if I had use of a private jet and a few days to myself I’d like to go and visit my friends and family! Ozil haters just don’t understand football…. it’s moved on from running around and kicking lumps out of the opposition and hoofing ball up to the big man.