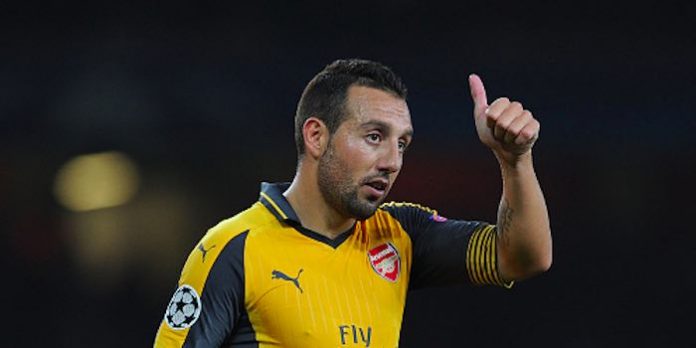 We’ve already run a couple of the main quotes from Santi Cazorla about his latest injury woes.

Now we bring you a full transcript of the interview he conducted with radio station Onda Cero last night.

The midfielder is obviously very down about his abject luck on the injury front and discusses how tough it is on the sidelines, his eagerness to get back and his thoughts on the defeat to Bayern Munich.

Please note: If other websites/blogs wish to use this sections of this translation, feel free, but a credit back to this original article would be greatly appreciated for all the work put into the translation/transcription.

How are you doing?

Well like you said, I’m going through a bit of a rough time. I’m alright, just trying to stay positive and recuperate, you know, just trying to be as optimistic as possible.

Yes. Yes I arrived at the hospital just in time to see Villarreal and then I saw Celta Vigo. I was happy to see the team playing well, it was about time.

Yeah it was about time, these results make you feel bad right? [Villarreal went out to AS Roma].

Yeah, when the Spanish teams qualify for the Champions League and Europa League I always support them. [Haha]

So Santi, why are you in the hospital?

Yeah [I’m in hospital] because they had to operate today…

They operated again this evening?

What did they do?

It was a small operation they just had to close a wound that had opened, so they reopened it and closed it again. It wasn’t anything serious, but that’s why I’m in the hospital.

But the operation you had, was it for a ruptured ligament in your ankle or what?

Well its a little complicated to explain…

It was a little unusual what they had to do. They did a graft about a month and a half ago because the skin on my ankle was practically dead and had developed a wound that wouldn’t close, so they operated in Sweden. They had to do a graft, it was starting to feel better until I started to do a bit of cycling and other exercise and then the skin broke, opened and the stitches came out. So today they had to close the wound again. Hopefully, now, I can finally start to recuperate and get better.

Yeah, it all comes into mind. I’ve been injured about a year and a half now since the knee [problem] in November last season and now this year with the ankle injury. Its given me a lot of time to think, especially about the World Cup and how bad I felt with my back then. Now it’s even worse than back then. Back then I was out for about six months and now its been basically a year and I’m still not better. But hey, that’s life. You gotta deal with it as best you can and be optimistic in the bad times otherwise, you get desperate from being at home all day and not being able to do anything. I can’t do much, can’t walk, I have to use crutches and it’s frustrating day after day. But I don’t have any other option, just to deal with it as best I can and get better.

And what time frame have they given you Santi? Even if its just a guess?

It’s hard to say because first I need the wound to close and if it doesn’t I can’t do anything. It’s hard because it all depends on the wound and when it closes and that’s got nothing to do do with me. Its the type of injury that depends on how it sets, in the end, it’s how the skin adapts to the graft they gave me using new skin taken from my arm. It’s been fine 90% of the time but that 10% is when it reopened which they closed today. I have to wait two weeks to see if it closes properly and hopefully I’ll be lucky enough that it heals so I can start to get back my lost muscle mass and ankle movement. Then we will see but it all depends on the skin and how it heals.

Will you have lost a lot of muscle mass?

Oh yeah I imagine so, I’ve been out since…

…and as much as I was walking before, I now haven’t done anything for three months. Just moving from the bed to the sofa and the sofa to the bed. I guess I’ve lost a bit of muscle mass but I’m not too worried about it. Hopefully with hard work and training I’ll get it back quickly. All I care about now is that the wound heals properly so I can get back to work as soon as possible.

But keep this in mind, last night I spoke to Alejandro Valverde, the cyclist. I told him (when there is something wrong with your body your face gives it away) you get it? He was out for two years and now look at him he’s going to hit 40-years-old and he’s still going. So you will be the same. Don’t worry about it, you will be fine.

Yeah lots of people are saying I’ll come back even better.

Especially because I’m really looking forward to playing again. To go back to the training ground and enjoy it like I have for many years. Overall, I need to start feeling better and get rid of the doubt I’ve had because of this injury and look to the future. It’s been hard, going to see the team in the stadium and not being able to train every day. I miss the routine of going and training with my teammates and that makes the wait so much longer. Like you said, keep in mind Valverde, be optimistic and see what tomorrow brings. It’s all just a bit complicated right now.

What a disaster the Champions League defeat to Bayern Munich was…

Yes, the fans were…

The fans were pretty disappointed?

Yeah, well with good reason, right? We had a lot of hopes for the Champions League and now it’s tougher to stay in. But it was all in the second half, in the first it was good. We had good possession, then Bayern scored and we had a few opportunities in the first half but that second half was bad. Bayern scored four goals so its normal for fans to be mad. First, we are annoyed with ourselves and of course the fans [are right to have] expected more from their team.

When you are better Santi I think you need to come here.

[Haha] Yeah, we will see, I still have another year here [at Arsenal]. First, I have to get better then we will see. You know, I just want to play as much as I can. I love it, it’s what I want to do and I want to do it as often as i can. All I want now is to get better, heal and get back to playing at my level and we will see what happens in the future here or Spain or wherever.

I love him. Keep smiling Santi.

So sad. I do hope he gets fully fit and manages to have a good season with Arsenal in 2017-18.
He’s a genuinely nice guy, humble, and truly enjoys the game.

As much as as I love him, him being a deep lying midfielder always felt like a short term thing.
Arsenal needs to learn how to play without him.

Of all the injury-hit seasons we’ve had, I thought this would be the year when we wouldn’t have….

This can’t be a genuine interview, he doesn’t say ‘…no? at the end of each sentence.

I think its been translated as right rather than no

WISHING YOU THE BEST OF REVOVERY. I MISS YOU ON THE FIELD WITH YOUR SMILING FACE. COYG

I remember when TR7 came back from injury, he had this charm which lit up the Emirates. Now Santi is that guy. Get well soon Santa.
No Sanogo no party, no Santa no presents.

Reading his comments, feel sorry for the guy. Must be tough psychologically to go through it – 3 months just moving from the bed to the sofa then back to the bed.

Both as a player and as a human being, Santi is one of the few players you genuinely feel sorry for.
Mad respect to him for staying optimistic about returning asap.

He’s been a big miss for us. As an aside, it’s striking how friendly the press from other countries are to their native players.

When was the last time the English press genuinely said good words for when Theo or Jack got injured? They all repeat how they are a big miss to England and not about Arsenal.

Poor Santi, he really has been through it, hope everything starts to heal properly soon, such a lovely man

One of the biggest coups Wenger has achieved luring him to the Arsenal.

Love watching his close control and his two footed abilities is for any child aspiring to be a top player to emulate.

And people moan saying players have it so easy?! I wouldn’t fancy having a hole in my dead skin in my ankle…… not able to walk and hopping from bed to sofa for weeks on end. he has been through the mill recently but I bet he still has his smile face on! got to love Santi!
Get well soon you little magician

Parejo from Valencia would be a good shout to replace him in the long run. He’s a real winner. We need to look away from big names and big clubs. There is no value there and the expectations are always stupidly high.

Parejo is too inconsistent and not that talented at all to play for us and be as important as Santi. If I would choose, I’d go Dani Ceballos from Betis. That bloke is special, very young, great at dribbling in tigh spaces and he got a bit of Rosicky on him too!

I’d genuinely be delighted to see him still doing what he does at the age of 40.
Got a bit of Pirlo in him, if he can stay fit I’m sure he’s got a couple of top level seasons left at least.

Sad. Very sad, for a player that good, and for a man that nice. It is good to be optimistic, but I fear that Santi’s days in top level footie are over. I would like to be wrong.