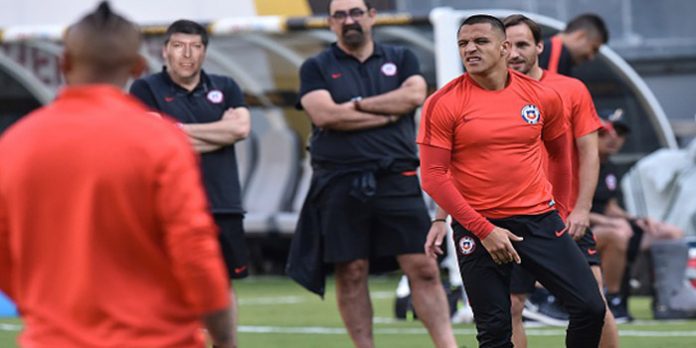 After Saturday’s 3-1 defeat to West Brom, Arsene Wenger spoke about the injury sustained by Alexis Sanchez.

The Chilean was on the wrong end of a nasty challenge from James McClean, and the Arsenal manager revealed it was only at the player’s insistence that he emerged for the second period.

“He was injured from the tackle in the first half,” said Wenger. “It was a bad tackle. His ankle is in an absolutely terrible state.”

And as for his chances of playing against Argentina, he continued, “If it’s only a kick, he will play. If the ligament is damaged, he will not play.”

We have yet to see if he will make the team for the game, but via Sport Witness come reports from the Chile camp which say he’s training as hard as ever, ‘full throttle’ is the phrase used.

When everyone else is finished, he’s out there doing extra training, before carrying two shire horses on his back to a nearby blacksmiths to pick up a half dozen anvils which he will then drag back behind him on a rope using his bad ankle.

At least it suggests that the damage isn’t so bad. If he’s training and not resting with bags of ice all over it, you’d like to think it’s not as bad as feared.

We’ll update over the coming days when we know more.

What the fuck is going on with that geezer back left’s face??

He can get motivated for Chile then…

Are you suggesting he’s not motivated for Arsenal ?

He is not the just the most motivated player at Arsenal but the ONLY motivated person at the club.

Alexis has reduced his running and sprints since november. The stats tell no lie. In other news Wenger will not pay him 250k a week. I´m not saying there´s a connection…

I know the stats. And i repeat.. STILL the most motivated. Shop window? Nah he just wants to win!

Good news! We need the maximum out of the transfer fee

Why has he guy on the left been photoshopped to have Bowie’s face?

Fair enough. Not sure how he’d of developed muscle injuries when he hasn’t been playing though

It’s been the Arsenal way for the past decade. Mysterious muscle injuries coupled with long absences.

Long list of players at our club that have spent eternal amounts of time out with slight injuries. No shock another one seems to have caught the 3 weeks bug.

you know you can get muscle injuries during practice?

dammit. I jumped the gun and removed him from my fantasy team. And now he costs more than he did last time. 🙁

The man is indestructable I swear!

Going to be hard to keep him. We simply do not match his work rate or appetite. Wenger may be able to persuade Ozil IF we make top 4 but he has been here since 2013 now with 2 FA cups but I think his ambition was higher. I think BOTH men came in part due to Wenger’s reputation for developing players. I think Ozil felt he had not reach the heights he is capable of at Madrid with success coming too early and easy. Alexis was want away from Barca as his development was restricted there by playing time… Read more »

Another Chilean who is tough as nails that I wish we could have in lieu of Alexis is Arturo Vidal.

Sadly I don’t think we possess the allure nor power enough to pry him away from Juventus.

We have unfortunately over last 5 seasons too much of a “calamity waiting to happen” feel about us. This can only be a result of managerial lack of application.

Particularly as he plays for bayern. Plenty of players I’d rather have though. Marco Veratti would be up the top of my centre mid list.

International press considered Vidal was the motm on the last game between Arsenal and B. Munich

Somehow, I still have high hopes Alexis will stay at Arsenal.

His ankle may be fine to train but the picture above would suggest his right ball is causing some issues.