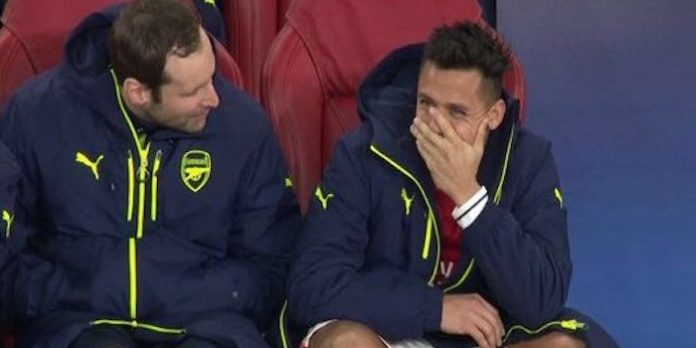 Alexis already has 98 goals and assists in all competitions (League, Champions League, FAC, and LC) for Arsenal. This averages slightly less than 33 per season over his three years at the club. He had a poor season by his own standard last year but has bounced back admirably this.

Giroud is a player often overlooked by Arsenal supporters as simply not good enough but he does get goals and even after being benched this season in favor of Alexis and others, is still pulling in a respectable 12 goals and 5 assists in all competitions this season. His average of 26 goals + assists in all competitions for Arsenal is even more remarkable because he has maintained this high level over five seasons since 2012/13.

Özil signed with Arsenal four seasons ago as Wenger’s “little surprise” and has gone on to create or score or assist 80 goals for the club. This averages out to 20 goals a season. But there is a small problem with this data: 36% of it was generated last season when Özil had 20 assists and 9 goals. Over his other three seasons he averaged 17 goals and assists per season.

Walcott and Cazorla have lower numbers because of injury. Walcott has hit peak goal scoring form with 17 but his assists have dropped off to just 2. Meanwhile, Cazorla’s numbers are quite staggering when you consider the fact that he has just 10 goals and assists combined for the last two years. At 32 years old, it seems unlikely that he will recover that form from 2014/15 which saw him score 8 and provide 15 assists in a whopping 46 starts.

As with the numbers above, these stats are measuring all competitions (FAC, LC, Champions League, Premier League, and Charity Shield). In those competitions, the Arsenal players (not counting own goals) are scoring on a five year high of 15% of all their shots.

Still, despite the great scoring rate, Arsenal are only on pace to score 105 goals. That’s 10 more than last season and Arsenal may have fewer matches than last season as well. What’s kind of funny here is that I don’t think finishing matters as much as people think. Of course it’s helpful to be great at finishing (Leicester were good last year, but not the best) and it also helps to create a lot of shots but it’s best to do both and so far Arsenal haven’t been able to put that whole package together. So, this year Arsenal are taking less shots than in 2015 and will score less goals but will probably finish at a higher rate.

One thing that is clear is that Alexis’ poor finishing hurt Arsenal last year. He and Giroud took about the same number of shots (Giroud 140, Alexis 136) but Alexis only scored 13% and Giroud 18%. The result is that Giroud scored 7 more goals than Alexis last year.

He is significantly improved this season and is at 19% finishing but despite his improved finishing, Walcott and Giroud are still beating him! Interesting here also is that Lucas Perez is scoring 24% – 7/29 shots.

What are Arsenal doing better?

Switching stats gears a moment, if I look at just the Premier League data I see that what Arsenal have done is dramatically increased our “Big Chance” conversion rate. Big Chances are one-v-ones with the goal keeper and shots from close range or unmarked headers.

Last season Arsenal struggled to finish big chances as a team, putting away just 38%. This is slightly below what I see as average (40%) for all teams across the League. That low finishing number was down to Walcott, who only scored 4/15, Özil who was 4/12, and Ramsey who was 2/10. The three headed hydra of blown chances converted 10/37 last season.

The problem is that on average Arsenal are creating just 2 big chances per game, down from 2.5 per game last season. And worse, Arsenal have fallen from creating 5.4 shots in prime (shots in dangerous area right in front of goal) to 4.2. However, the conversion rate of shots in prime is also up from last season, 10 percentage points from 20-31!

That improved conversion rates from shots in close accounts for Arsenal’s higher goals per game average of 2 per game his season – up from 1.67 last season. We do exclude own goals from these counts and do include penalties in the big chances numbers. Also there is overlap between shots in prime and big chances.

While Arsenal are creating fewer chances but scoring them, they are also conceding more of those same chances and unlike last season Cech isn’t saving. Last season Arsenal allowed a respectable 0.9 big chances per game and Cech saved 48% of the ones on target. This season, Arsenal are allowing 1.5 per game and Cech is saving 31%. This is almost exclusively down to the fact that he hasn’t saved any penalties this season.

Shots in prime tell the same story. Last season, Cech faced 2.5 shots in prime and the opposition only scored 14%! That’s all shots in that area. Cech saved 64% of shots on target in prime last season, a League high. This season, Arsenal much more open and have allowed 3.2 shots per game in prime and Cech is only saving 55%.

The result is that last season Arsenal only conceded 14 goals from prime last season and this season have already allowed 17. With Liverpool coming up, a team who battered Arsenal last time out with shots close to goal, that number is sure to rise. Big chances are similarly bad with Arsenal conceding 22 goals this season from big chances and 13 last season.

The final analysis shows that Arsenal are scoring at a better rate so they don’t create as much as last season. But Arsenal are also allowing teams more and better shots and Petr Cech is not there to save them like last season. Which explains why Arsenal will probably score 72 Premier League goals this season but also have already conceded 2 more than last.

This explains why Cech went from golden gloves last season with 16 clean sheets to just 8 clean sheets this season. And maybe this is what Alexis and Cech were joking about on the bench.

If Arsenal want to finish top four this season they are going to either have to tighten up on the shots allowed, save more shots, or start scoring a lot more.

Simply shows how good and underrated Giroud is…

You know, in France right now after the latest call to the national team there is a big debate around Giroud. Deschamps is experimenting with younger players such as Mbappé, so of course you have to drop someone…that someone was Lacazette, who is playing well at the moment. And I have be staggered to read on french forums that Lacazette is 10 times the player Giroud is blablabla. Giroud does not get any respect here this side of the Channel (I’m french if you had’nt guessed). His underrating is even more vivid for the national team. But I like to… Read more »

So Lucas Perez is our 2nd best finisher this season. Whilst its great to have an impact striker on the bench, if we need to score more goals why not give him more minutes on the field?

If anything, this shows clearly that there’s work put in on the training ground to improve the team. I think the manager, backroom staff and playing staff figured if they could be more efficient in front of goal, we’d be better off. I mean, the defence looks good and bringing in Mustafi and Holding in for Chambers would be an improvement. Things just don’t seem to come together the way they envisaged. Nice work as always

But we’re arguably slightly worse than last season. If the trade off to being more efficient is creating less chances, then it’s not really worth it. Yes, the players are better, but as a team we’re functioning worse. And don’t even get me started on our midfield, who’s the main culprit for our defensive troubles.

“With Liverpool coming up, a team who battered Arsenal last time out with shots close to goal, that number is sure to rise” -?? How many times are we playing them this year, or did you mean ManCy?

Ah, right; so we need to score more goals, or conceed less, but preferably both – works for me..

maybe make Wenger aware of the facts his eyes deceive him on Perez! who would blame him if he leaves he has nothing to prove in his performances his attitude or his minutes on the pitch his form has been good for the little time he has been given yet has become the new joe campbell

Cech is too slow now, especially in getting down low for penalties, and Perez should play ahead of Walcott, the Ox or Iwobi. Its simple maths, Arsene.

Hey 7am, are big chances and shots in prime solely classified by their location on the pitch?

my understanding is that shots in prime are classified solely on their location, while big chances are ‘situational’ (1v1 on the keeper, unmarked at the back post, point-blank shots, etc.; essentially situations that result in a goal as often as not).

There’s an obvious problem with the straight, uncomplicated comparison of Alexis and Giroud in terms of conversion rates. I’d intuitively argue that Alexis takes more difficult shots, hence the tendency to miss more often than Giroud, who largely scores from within the 18. A fairer comparison would take into account individual big chances and shots in the prime as you defined them.

Good point but some of that is also decision making (when to shoot/when to pass) and Alexis is definitely a shooter who doesn’t mind a gamble on a tougher shot. If you compare big chances, as you suggest, Giroud is still the better finisher (3/4 or 75%) compared to Alexis (10/16 or 62.5%), although this sample size is too small to really make a definitive conclusion (e.g., if Giroud misses his next big chance, his average will drop to 60%, if he scores it will go up to a whopping 80%. The difference between 60% and 80% finishing seems huge… Read more »