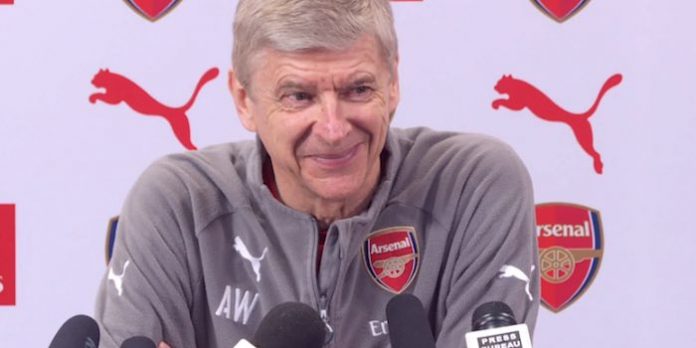 The Gunners head for an early kick-off at the Hawthorns, and after illness swept through the squad, it looks as if those who were on their sick beds – like Danny Welbeck and Alex Iwobi – are back in contention.

Speaking about availability for the weekend, Wenger said, “Gibbs is uncertain at the moment. Oxlade-Chamberlain has a test today [hamstring].

“Elneny has joined in again, so apart from long-term injuries we should have everyone available.

“Elneny looked like bad ankle injury, he has recovered well, he’s a strong boy and has come back quickly.”

So, as full a squad as we could hope for bar the longer-term absences, let’s hope the team can build on last weekend’s FA Cup win with a Premier League victory to take us into the Interlull.

Partey out, Elneny back, Saka being assessed

The way he’s been playing for most of the season, I wouldn’t start him against anyone.

You mean our second leading scorer and 2 goals in the last three? That Walcott?

Sorry did I miss his impeccable record against teams (like West brom) who sit back and defend? My bad then. If the team selection is based on overall contribution Ox, Iwobi or even Perez is ahead of him (assuming Alexis is on the left, and Giroud/Welbeck takes the striker role). I recently saw a Bundesliga segment on Serge Gnabry’s form at Werder Bremen, it left me thinking how did we let a talent like him go, while players like Walcott who go missing in most matches and still play for Arsenal. It is high time we have a world class… Read more »

Need to get back the fluent attacking rythm. COYG!

I zoomed in and counted them
He’s not lying, it’s 36 points, no strings attached

I watched an interview with saido berahinho (defo spelt that wrong!) and he said he’s coming for arsenal on Saturday! Cmon boys, put the little shit in his place!

Does he not play for Stoke now, though?

The Stig
Reply to  Eddy

tapps
Reply to  The Stig

Nobody told me he’d left Gillingham. I demand answers!

Godfrey Twatschloch
Reply to  The Stig

I thought Stoke managed Pulis. Right out the fucking door!

And now here goes our unbeaten run….that’s the Arsenal for you.
Coygs.

unbeaten run? haven’t we won like 1 game in the past 3 weeks?

I think Runnings means – here we go with our usual “end of season” run of good games where we scrape ourselves into top 4, above the clowns from down the road, and the feelings towards AW are positive enough that we accept his new contract signing. I think that’s what Runnings means…

So no news on Sanogo again?

He played most of the U23s match on Monday night. He did OK.

Want to see a team of men again and wanting to fight to win.

At this point, what are they fighting for?

I’ll like to see a front 3 of Lucas, Alexis and Theo just for the fun of it, it’s not gonna happen though. We need to get back to our early season form ASAP. COYG!

Pulis will play the physical game and try to kick us out of the game. That has so many times against us. For sure the ref will not protect us like M. Oliver protected Hazard against the Manure that Moureen presented monday night. Tactical brilliance from Moureen: “Hey guys lets go out there and kick the shit out of Hazard”

We have to be up for the fight.

Always reminds me of two seasons. One where he said we could go the whole season without defeat. We failed and our rivals (man united that time) mocked us and used it to compare him to comical Ali.

We went on to win it without defeat and I still have that smiling face with the words “Arsene knows ” on a T shirt.

Nothing will ever take that away from me. Whether he stays or goes that smile will always remind me of my happiest moment as a football fan

If we can knock Man City off of the FA Cup, beat them in the league, do the same to Spuds and United. Then even after all this shit storm, we can still salvage something.

Its the hope that kills you 🙁

I hope Elneny plays. Much prefer him to Xhaka. Also I love how he talks about Arsenal, seems like he has a real affection for the club. That is the sort of players we need in the squad, guys that really give a shit about Arsenal.

I would love to see plan B from a few seasons ago. Let West Brom, have the ball, stay compact, and hit them on the counter.

A front line of Lucas, Alexis and Theo would love that tactic and it would catch West Brom off guard.

Maybe it would be fun to watch as well

Unfortunately that rarely works with the smaller teams that are happy playing for a draw (and maybe a lucky 1-0 win).

Ca-ZOR-la. How many times do you have to be told?

They sell rings to delay premature ejac… maybe there´s something that you can out on your fingers. Nothing has felt right since we lost Cazorla.

the tactics are simple WBA away nick Tony Pubis baseball cap and play 4 4 2 simples peeps dat aint gonna happen, Monaco have proven they have played 4 4 2 all season top goals scorers in the CL and domestic league

yes, because if one team play well with a certain formation, all another team has to do is play that same formation and they will play well. works every time. simples.

I hope this game doesn’t end up with Kos & Mustafi as the highest pass combination…This game is perfect for Alexis, Perez and Welbeck however, I’m sure it’ll be Alexis, Giroud, Walcott, Ozil, Ramsey, Xhaka, Nacho, Kos, Mus, Bellerin & Cech.

You forgot Iwobi, who Wenger will start 1001% when fit

We need height at the back for the WB setpieces. Per & Giroud should start!
Bellerin & Gibbs for fullbacks. No Coquelin please. Xhaka & Elneny for me. Özil in the hole. With Sanchez on the left & Ox on the right.
We will have a good chance.

We need the 3 points like a drowning man needs air. If we play with that attitude, we’ll win. It’s time to go on our usual win-to-secure-CL-football run. Expect fantastic wins. Arsene and the boys sure know how to pull it off. Remember the season Spurs were 13 points and 2 goals up at the Emirates. We turned it around with 5 goals and went on to overhaul them. Arsene knows!