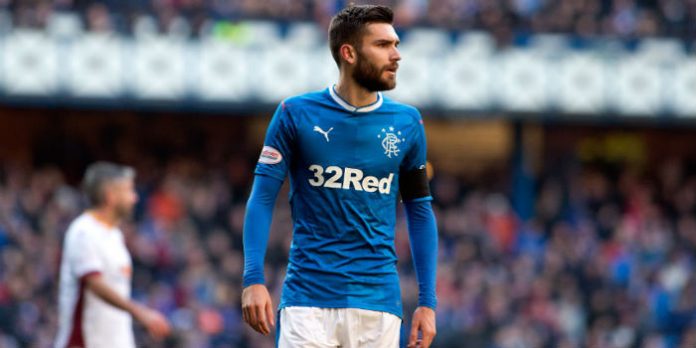 Jon Toral signed a contract extension with Arsenal in January before completing his loan move to Rangers in January.

According to FA records, the Gunners updated the Spaniard’s registration details on 16 January and Arseblog News can reveal that he has signed a new long-term deal with the club.

The 22-year-old started the season with Grenada but cut short his adventure in La Liga for more first team action at Ibrox.

The midfielder was lured north of the border by Mark Warburton, who’d previously coached him at Brentford, however, the pair only worked together for a month before the latter tendered his resignation.

Despite the upheaval, Toral has been a regular at Ibrox since his move and still harbours ambitions of making it at Arsenal.

Back in January – comments that now make more sense – he revealed, “I have another year left on my contract at Arsenal and I hope I can go back and make the step up to the first team.”

We’re unsure of exactly how the one year comment tallies with the information about his new deal being long-term, so there’s still a bit of clarity required there.

He also noted that Arsene Wenger had been firmly in support of him moving to the SPL to aid his development.

“Playing well for Rangers can help me prove to Arsène Wenger that I am ready for the first team,” he told The Times (£).

“I believe I can get my career back on track at Rangers because ultimately I want to go back to Arsenal and play for the first team there. I’ve had two good loan experiences and one bad one.

“I am confident I can cope with the physical side of Scottish football and it’s an exciting time for me again. The manager at Arsenal was very keen for me to join Rangers, so that was a big help too.”

Hope it works out for him

I hope he has the quality to make it. We could do with another option in cm. Wilshere is not setting the world on fire for Bournemouth

Imagine if he played in a side near the top of the league with strikers that could put away the chances he creates.

…And since the link failed to work:http://bit.ly/2mUNHI4

Lines, damned lines and statistics.. Did you notice he was dropped for Bournemouths last two games? They switched back to 4-4-2 from 4-5-1 and he was the cm to be dropped. They took 4 points from those games. Don’t let a few facts like that get in your way…

Did you not notice he was previously injured couple of games back??

He was on the bench for both games…

This season, he has out-performed England’s current golden boy as follows:

This is for Bournemouth remember, not the side currently second in the league. This is also just after a long injury layoff, getting back into form.

He was injured in the game prior to those to, and was given a phased return. But don’t let facts like that get in your way.

I rate Toral. Here’s hoping he can make the jump to regular first team action.

Really need to see a highlight compilation of this young gunner….
Hope this kid is the real deal and can slot in to our midfield and prove himself…

I always buy him in Fifa when I play for Charlton!

Arsenal do not allow players who we want to keep, go on loan if they have not signed offered contracts.

Considering Rangers have been shite all season, I won’t be betting on the lad making our first team.

Whats Rangers shitness got to do with his own quality?

I’m a big fan of Toral. Imo, Ramsey needs to pick his shit up, otherwise Toral is waiting.

I get to rangers game regularly as I’m a Scottish gooner. He found it really tough the first few games, possibly due to the formation he was being played in. But in general things you would expect him to do well with he struggled. 2 weeks ago he was by far the man of the match for a 6-0 win against Hamilton. Hopefully he’s found his feet which is good for the bears, but hoping he makes it at arsenal as I’m a big fan

Anyone seen how he’s getting on at rangers?

He was Birmingham’s player of the year (or some sort of award), so he can’t be all that bad. The championship is a tough league.

Grenada? Didn’t know they had professional football, rather a step down.

As a Rangers supporter who’s watched him every week since he joined, I’ll be absolutely amazed if he ever plays a game for the Arsenal first team.