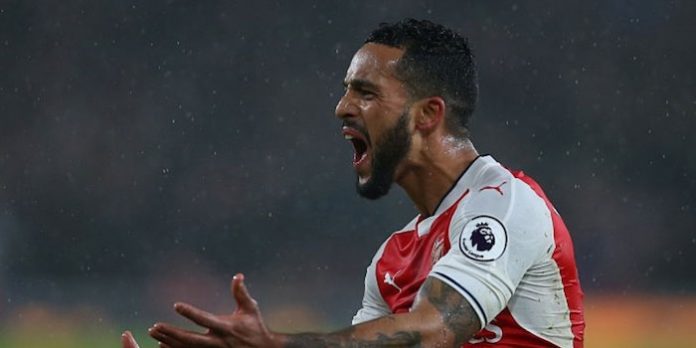 Gareth Southgate has revealed that Theo Walcott was not pleased when he called him to tell him he’d been left out of the England squad for the upcoming internationals.

With forwards in such short supply that 34 year old Jermaine Defoe has been recalled, the Arsenal man, with 17 goals to his name this season – 7 of those in his last 10 appearances – has surprisingly been left out.

Southgate says that the 28 year old was not best pleased when given the news.

“I’ve got to say he wasn’t chuffed to bits to get the call. And I understand that,” he said.

“Quite rightly, he said, ‘I’m one of the leading goal-scorers in the league.

“I don’t mind being challenged on that at all. I totally respect that.

“I don’t expect him to be happy. But I’ve got to make decisions and I think it was the right think to call him to talk that through, even though the timing probably wasn’t great.”

Walcott got the news on his 28th birthday, which really shouldn’t make any real difference. His anger is because of the fact he’s been left out, not when the news was broken.

Still, let’s hope it fires him up for the weekend and that West Brom are on the receiving end of some of that patented THEO WRATH.

Gotta say he deserves to be in the squad!

Like in reality, who cares? The England set up is a shambles anyway. The friendlies and qualifiers are literally pointless because the results of the matches have no bearing whatsoever on how the England team will perform in a major tournament. Well I say ‘perform’ but lets face it, they haven’t done that for years, they just go out there and get beat and go home like a bunch of losers. As an Englishmen and an ‘England fan,’ I am so bored of International football, like I just don’t care about it anymore. As a nation we are leaps and… Read more »

May be he does care , may be he wants to be part of the team, u got man u players and spurs players, why should he want to be a part of of it.How would u like it if someone phoned u up and said sorry but u aint wanted.

Sorry that was ment to be why shouldnt he want to be part of the team.

gotta say he doesn’t deserve anything. He’s an inconsistent prat who hasn’t delivered for Arsenal. He’s been at the club 10 years and is still a bit-part player. What a waste of space

Let’a be honest, how on earth can Lingard be ahead of Theo in the England squad? Southgate is being petty.

And this is why we can’t have nice things when it comes to the national team. Instead of finding the tactical tweaks to get the best out of Walcott, far superior to Lingard and Redmond it must be said, we’d rather go for the flavour of the month. We’re so obssessed with perceived “in form” players that we’ve never let a squad settle and establish a style of play. You never here about players not fitting the system anymore, we just don’t care. That’s why Walcott has been left out even though he has more goals than Defoe and more… Read more »

Well the standard of the English FA is so high that a player with 17 goals this season isn’t even in the squad.
But they find place for the likes of Redmond and Lingard etc. And then they wonder why they don’t do well in major competitions.

Don’t worry, Theo. Have you seen that squad? It’s clearly not picked on merit. Maybe Southgate will be gone come fall.

I wonder what Theo was thinking 10 years ago today on his 18th birthday?In particular, how would he have envisaged the football career ahead of him? Already been to a World Cup and scored a goal in a cup final at Wembley for Arsenal. How would he have pictured the next 10 years? I bet it didn’t include no league titles, European club trophies or international trophies! I bet it didn’t end with being dropped from the England squad altogether…..when there’s an English striker shortage…and Redmond, Lingard, Defoe and Livermore in the squad! I’m not having a pop at him.… Read more »

Monaco beat Man City with a squad that had an average age of 24. Their core is full of young hungry players. For such a young squad they didn’t play “naively” and didn’t lack “maturity” but our 28 year old project player is still finding himself and we are cool with that. I don’t get it.

mfw I suddenly realise Theo is 28…

Exactly. Jeez he’s taken 11 years and hasn’t improved noticeably in that time. Ask yourself this: if all those years ago he had signed for ManUre, Chelsea or even the Middlesex Marsh Dwellers, would he still be there? How many games would he have played? Would the fans still be giving him as much rope as we do?
He’s yet another failed Wenger project. And yet Perez sits there rotting on the bench.

At 28 the clock is really ticking.

The only explanation that I can come up with is that Southgate has let himself be influenced by the “everything to do with Arsenal is crap” line we are constantly being bombarded with by the media and pundits. Walcott (17 in 26 appearances) is arguably having his best season ever both in terms of general play and goals scored yet he is left out and the likes of Redmond (6 goals in 26 appearances) , Defoe (14 in 27), Lindgard (4 in 26) etc all of whom have inferior stats get in the squad. It’s unbelievable, defies logic and is… Read more »

Good need theo firing on all cylinders for us, Not getting injured in a pointless friendly.

Just when you think the England team management debacle couldn’t get any more absurd, Southgate comes along and outdoes everyone. It literally is beyond a joke.

This why England don’t win anything. The selection process is a joke. They give Caps away like candy and never have squad stability and commitment. Select the squad at the end of or start of the season and stick to that unless injuries occur. This creates a stable and encourages loyalty and commitment from the selected squad. Chose the right squad based on the skills and abilities over a number of years instead of looking for players and flavours of the month. A squad of 25 which blends experience and youth potential making sure the players with the most hunger… Read more »

“Quite rightly, he said, ‘I’m one of the leading goal-scorers in the league’. I don’t mind being challenged on that at all. I totally respect that.”

Quite rightly? So, Southgate operates at the level of wrongly. I suppose he has some alternative facts at his disposal.

I just don’t understand them. Not even the name. Every football match is international, and these matches are a friend of no one.

Although you have to appreciate what Southgate must think is an ingenious approach: “We failed when we picked our best players. Maybe we should try our less good players!”

I don’t speak English English. Can anyone translate chuffed? Because chuffed sounds like a reaction one would have to the situation…but after investigating context clues, he clearly was not chuffed

Theo to score six against West Brom just to shove it up Southgate’s slimy arse.

Southgate? The one that lost the Euros in arguably the best England side? He is a joker, please Theo ignore him and just keep on firing for Arsenal.

Just you Watch, here comes a hatty from theo this weekend 😉 ..

The less arsenal players on intl duty the better.

I’m off to have a nice glorywank, I suggest you all do the same.

Show some of that anger on the pitch please. A few against Spurs, City and United would do nicely.

Hmmmm England are average but so is Theo

It looks like Southgate is just trying out players with this squad, so I don’t think it’s that much of a snub

Totally agree with Southgate, Theo has 17 goals this season but how many of those did he create himself??? All assisted and tap-ins. Theo’s behind every English winger in terms of creativity, don’t let the goals give you amnesia.

Until football matches are scored like figure skating, I’ll take the player who actually scores.

But he was there to tap it in. Even when he misses the tap in he distracts the keeper enough for the ball to go straight into the net 🙂

Do not worry Theo. Fire up for Arsenal and shut Southgate’s mouth. You are a legend.

Listen Theo have u seen the squad? Just sit back and pair the best out of that shit show with Germany on Fifa and I bet you will be laughing like hell

Dan.
I think you will find that 99% of goals involve an assist even, what a stupid comment! As far as tap ins are concerned you have been watching a different player to me. The one against Bayern for example, all his own work and hardly a tap in. And that’s not the only one.

I’m not too unhappy,at least he won’t get injured in a pointless match but Southgate will have to bring him back for qualifying games

Why do internationals matter for England? A bit like Arsenal being in the champions League. They’re never going to win anything.