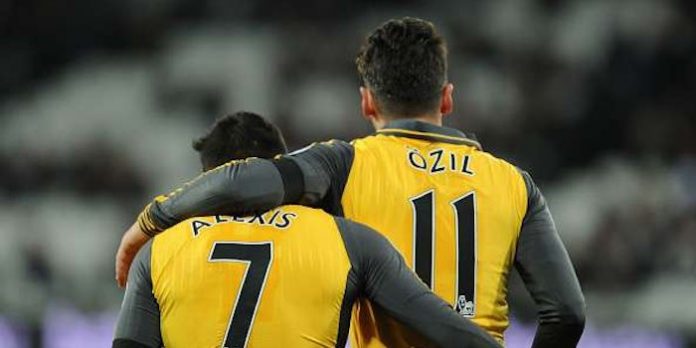 Arsene Wenger says he takes comments from Alexis Sanchez that he wants to finish his contract with Arsenal as a positive, despite the fact it has led to increased speculation about links with Chelsea.

What the Chilean said has been misreprsented slightly (see today’s Arseblog), but while there are undoubtedly concerns about his future, the Arsenal manager didn’t seem overly concerned at his press conference today.

Asked for his thoughts about what Alexis said, he said he viewed them, ” …in a very positive way, there’s only team in London so he’s happy,” he said.

“I think personally he’s happy here. It’s true that we have not extended his contract yet. I hope that he will stay at the club but overall I think you have as well to be very cautious when people give interviews in their home countries.

“As you said, the interpretation is not always exactly what they wanted to say. I don’t see anything in that – he said he wants to win the championship, that’s what everybody wants. I can understand that completely.”

The Gunners have sold big players to other Premier League clubs in the past, but Wenger pretty much ruled that out this time around and in the future.

“It’s true that it happened before when we were in a position where financially we had to sell our best players, and that’s not the case any more,” he said.

“He has over a year on his contract so it’s not something that’s an immediate concern for Arsenal football club.”

And as talks with Sanchez and Mesut Ozil are on hold until the end of the season, he seemed calm about both situations.

“I think when you go into the final 2 or 3 months of the season everybody’s more focused on the end of the season. Then you give yourself more time inbetween the two seasons.

“You know, they’re not out of contract at the end of the season. I personally believe that both of them want to stay and I hope that the club will find an agreement with them.”

Sign both, bring back Wilshire, sell walcot, Ramsey and Gibbs.

Now i’m probably thinking a bit outside the box here but go with it… How about we get someone in that is an expert at negotiating the modern footballers contracts.

It’d be nice if we’d stop leaving it so damn late…the list of players’ contracts that run out in summer 2018 is alarming.

I do wonder if us leaving it so late is also due to Wenger being so hands on with contract negotiations, particularly with existing players? Because I can’t see how a man so involved with every facet of the club’s football runnings can ever have time to thrash out these long negotiations as well, and is usually suited to leaving it to the end of the season, which also happens to be when he’s more available for such things. If so, just more example of how our dependency on one man can leave us off a shit’s creek. Because this… Read more »

Ozil and Sanchez aside, I think we’ll likely see some of those expiring contracts and players moved on; what looks like sloppy HR management to us is likely more indicative of a plan to replace a number of these players with new recruits, and that will involve everyone from the scouts (who’s good?) to the manager (who do we need, who is leaving?) to the negotiators (what reasonably can be achieved?) being on the same page. I’m sure the club is weighing the pros and cons very seriously with respect to Ox and Wilshere in particular. In this sense, I… Read more »

While leaving contracts to the end is generally not a good idea as it puts the club in a terrible position, this might be the one scenario where it works out ok in that it will force Wenger to finally make a decision on so many players who never lived up to the hype. If they had 2-3 years left it seems unlikely Wenger would actually clear anyone out. I’m probably wrong but is Gervihno the last player the club actually moved on whom the club wanted to leave (not counting all the academy players who never really made it)?

What make you so sure that he’s even involved in the players contract renewals? He could just be telling us what Dick Laws team have told him…

We had one namely David Dein whom was unceremoniously sacked. Never been replaced.

Perhaps they’d be more willing to stay if the board hired a manager who has legitimate prospects of winning the league!

Anything in the fact he says “I hope that the club will find an agreement with them”? Could he be hinting that it’s the club dragging their heels about paying the increased wages – or am I reading into it too much and should just accept they’re leaving!?

Pretty sure the club will do whatever Arsene says re: contracts. If he tells the club to pay up, it will (assuming the numbers we’ve heard are accurate – I can see the club saying no to a 500k/week contract even if Arsene somehow wanted them to do it, obviously).

Obviously Wenger can’t be expected to say that both Ozil and Sanchez on the way out with a good chunk of the season still to go, but regardless of what he says the writing is on the wall. What is alarming and embarrassing though is that Sanchez says he wants to play for a winning club in London, and everyone immediately thinks Chelsea (including Arsenal fans). Its a reflection of the depths to which Wenger has let the club decline, that Sanchez says winning club and everyone goes – “okay that rules Arsenal out.” Get rid of Wenger at the… Read more »

Futsboller
Reply to  Too Drunk To Be Offside

Stop reading the writing on the bathroom wall; those scribbles mean nothing at all.

Ozil and Sanchez will both re-sign at season’s end, as they are both quite happy at Arsenal. They both want to become legends here, and have their work cut out for them, but there are plenty of reasons to be optimistic.

I believe Alexis is the man of highest ambitions. According to his words, he has no problem to be tied down in one city IF he’s able to play for a club with matching ambitions. That doesn’t necessarily mean to win the league & CL every year (even though it would be nice), but to be a genuine title contender year in year out.

My personal opinion is that if Wenger stays, Alexis leaves. He’s 28 yrs old, football life is not forever.

I want some of that what you are smoking…

Did they tell you this in private over a game of scrabble or something?
Did Van P tell you he was saying on Xbox Live too?

you mean bathroom wall scribbles like these:
some come here to sit and think
others come to shit and stink
i come to here to scratch my balls
and read the writing on the walls

One thing that I am shocked, SHOCKED I TELL YOU! has not risen from the murky depths of the tabloids is the old “Player A demands club shows ambition by opening the war chest!”

I could totally see Alexis doing this if there’s a chance he’d stay, and this would be a perfectly suitable opening salvo.

He seems just as often frustrated with his teammates on the pitch, and just plain with not winning, as with anything else.

He also gets really frustrated with his own play. He’s often had a poor (poor rather than bad) game and leaves the pitch clearly annoyed with himself. Unfortunately the press seem to like to say he’s always annoyed with others…

He’s a wonderful player, but can’t compete with this: https://www.youtube.com/watch?v=G7k4dFFHyyI