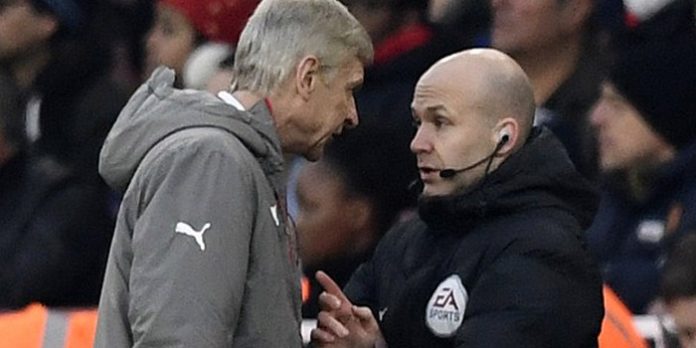 Celebrations are underway in West London after Anthony Taylor was announced as the referee for next month’s FA Cup final.

An impromptu open top bus parade has taken place around Stamford Bridge with fans and players singing songs about ‘We beat 9 man Arsenal’, ‘Red card for Wenger’, and ‘There’s only one Anto Taylor’.

“That was never a penalty that we’ll get at a point in the game when it looks like Arsenal might be having a decent spell,” said Chelsea fan Annette Curtin.

“Costa definitely dived, Koscielny was nowhere near him,” said true-blue Nick Urse, “but you won’t hear me complaining when Taylor awards the spot-kick and sends him off, sparking Arsene Wenger into a frenzy which sees him dismissed from the touchline.”

Taylor was, of course, involved in an incident earlier this season when he criticised the fourth official and referee Jon Moss, saying, ‘You are dishonest to your federation.’

He also told Taylor to “F*** off”, twice, which coincidentally is exactly the same amount of times every Arsenal fan will tell him the same thing inside the first five minutes.

Nice one, The FA. Nice one.

Boss slams media: “You are not interested in football”

We need a whip-round to get Clattenburg back, for one game only

He may just about be a better option than Taylor but he’s still a useless cunt.
Have they announced Blind Mike Dean and Martin ‘Lets all Kick the Arsenal’ Atkinson as his linesmen, And Lee Mason as the 4th official, just so we can have the full house of PGMO cunts…

With Mike Riley as the current head of the PGMOL is anyone really surprised that we constantly get shafted by referees? That being said I still cant believe that the City goal wasn’t given on the weekend. I honestly cant remember a huge game like that when a decision went our way. Normally events unfold like this; the crossed ball goes out by a country mile; Sergio taps it in; the referee completely ignores it and awards the goal; City go on to win the semi final; Arsene comes out in the post match presser and potentially hints at the… Read more »

Kwame Ampadu Down
Reply to  IamaGoober

We don’t get shafted ny referees. We get shit decisions against us & shit decisions for us…because most referees are shit.
The difference being the ones for us get glossed over & the ones against us stick in the memory for weeks & months.
It’s the same for fans of every club…and they’re all wrong. That’s football.

This is a far too balanced and sensible comment. ?

We get far more against us than for us. We get a kick when we’d have been better off with the ref playing the advantage or when we’re leading by 2 or 3 goals already, Whereas the ref will happily take play back from a failed attack to a previous foul for opposing teams or give them the decision when it’s nil-nil.

Before we really get into the persecution complex, check out Taylor’s stats at Transfermarkt and we find that neither team has lost with Taylor as ref this season, overall Chelski have lost 4 against our 2 and both teams have had two penalties.

He’s has given Lokomotiv Hammersmith far more yellow cards than us but we’re the ones who end up with second yellows (3) that they didn’t.

Just trying to be objective ?

Cue Xhaka inadvertent trip on Willian and a red card – in the 94th Minute with Arsenal leading 3-0.

With that prediction you must be assuming they’ve missed all 5 penalties against us for Costa and Hazard getting their hair messed up in our penalty area… Fingers Crossed on that one.

The fix is in. They’ve never forgiven Wenger for being French.

And for being more intelligent and more classier.

How is this guy rewarded with this game? Seriously. Plus, does anyone have our numbers against Chelsea with him in charge?

Actually looks like the only game he’s been on for us vs. Locomotiv Hammersmith was the 2015 Community Shield, and that went alright, so perhaps some hope:

I would almost accept Phil dowd over taylor. Almost.
Anthony Taylor is still fucking useless, though.

I see what the FA did there. Bloody trolls

I’m assuming this isn’t a gender joke, but a species classification joke. 😛

That will make the win even sweeter! Imagine Wenger playfully “shoving” Bouldie right in front of Taylor after the final whistle screaming, “You’re a disgrace to your federation!”

I believe that he will be totally fair.Its a massive game for him and if he makes a lot of contentious decisions he will be pilloried by everyone.
What you can’t legislate for is how cunning Costa is .He has fooled a lot of referees this season.
As someone else said there are so many consistently bad referees in the PL that it’s Hobsons Choice who you get.
Can’t wait for video referee to sort out the poor referees and the serial cheats Costa,Delle Ali,Adam and the whole Manc U team.

He’s got nothing to lose. The media won’t have a problem if he screws us over (they’ll just say it’s unlucky that we had the worse of his decisions but it’ll even out in the long run, like we can wait 50 years for that) and Mike Riley will be please if one of his boys fucks us over…
The standard of refereeing in some of the PL games is worse than tossing a coin for each decision but no one ever gets called out for it.

Why would they appoint someone who is dishonest to his federation

Just shows how incompetent our owner is.

Chelsea’s owner not only pumps in stupid money for transfers, manages to somehow get deficit erasing transfer fees for players (Luiz, Schurrle). But he also ensures he invests heavily in having the best officials for his team. Ever since officials cost him a shot at a champions league trophy thanks to that ghost goal vs Liverpool.

Even the FA are trying to ruin Wenger, If he wins the cup Wenger can say F*** Off FA too and gets banned from the side lines for 2 games and gets fined 100k and the ban to be served at the beginning of next season ?

Well that’s us Donald Ducked then.

Wenger needs to put the pressure on this gimp by highlighting that he expects no favours from Taylor and our players will have to be extra careful in the tackle or risk getting sent off and/or conceding a penalty – this will put pressure on the turd to try and be fair and perhaps get some decisions wrong in our favour!!! Failing that serve Taylor some dodgey lasagne the night before ?

Reminds me of the ‘good old days’ of Mike Riley at Old Trafford. The man was a lone crusader : his destiny was to ensure Utd had at least one pen per game, at the Stretford End. He kept getting the games there too. One man……can make a difference…….

And now that man is in charge of all the top PL/FA officials!

Where’s Uriah Rennie when you need him?