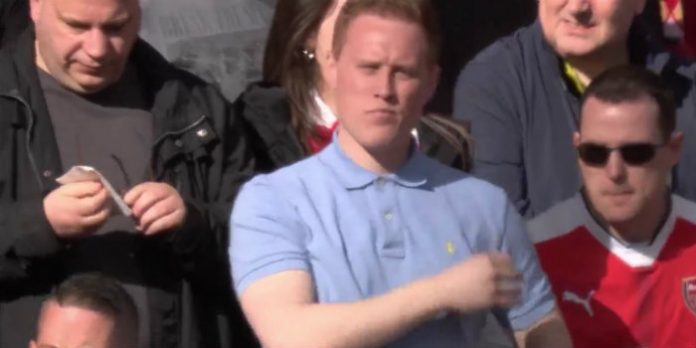 Emblematic of the season, Arsenal got off to another slow start and nearly paid the price as City opened the scoring in the 5th minute through a Leroy Sane 1v1 with Ospina. Arsenal struck once to reply after a broken defensive play left Theo Walcott with an unmissable shot in front of goal but just two minutes later Wenger went from fist pumping to throwing water bottles as Aguero scored from an impossible angle to restore the visitor’s lead. Wenger was left with crediting his players with mental strength after Mustafi scored an equalizer but while the scoreline was equal the numbers tell a slightly different story.

Pass quality as measured by me is a metric which looks at total passes, final third passes, through balls, and chances created. I assign a value to each event and then tally them up for each five minute period in a match.

Man City started strong and Arsenal didn’t catch up until the 25th minute. One way of looking at these passes stats is with game state in mind. City didn’t need to be very attacking because they already had the lead. Still, credit to Arsenal for attacking to get back into the match and taking advantage of City taking their foot off the gas.

The chart shows that Arsenal  dominated the totals between the 25th and 70th minutes but this is a bit deceptive. Arsenal had such a strong burst between 25th and 30th minutes that their momentum keeps their line above City. Between the 30th and 90th minutes, Arsenal dominated the pass numbers for just 15 total minutes. And while Wenger will laud his team’s mental strength, after Mustafi’s goal in the 53rd minute Arsenal’s passing went completely south:

Perhaps Arsenal simply ran out of steam but only one team were going for the win here and that was Manchester City. We should also credit Arsenal’s defense in this period, they were able to beat off one of the strongest attacking teams in English football and keep a “clean sheet” for the final 40 minutes of the match.

The shots chart backs this data up and shows that Man City were actually dominant throughout: creating more shots by volume and better quality shots.

(That ’53 minute goal should read “Mustafi”)

Reminder that my shots data measures the average for shots from the 6, the 18, outside the 18, big chances, and penalties. So, each shot is examined from its position on the pitch and assigned a number based on the average likelihood of scoring. Those are then tallied and a line drawing is created.

Once again, we see that Arsenal’s slow start means that they didn’t get a shot off until after the 20th minute. Meanwhile, Man City started right out of the gate with a “big chance” the 1v1 with Ospina.

Arsenal’s shots selection was limited by Man City’s control of possession but Walcott got and scored a big chance in the 40th minute.

And again after the Mustafi second goal Arsenal applied the handbrake (or City dominated them) and didn’t even manage a shot until nearly the end of the match.

Overall, Arsenal were bossed by City from start to finish and they should consider themselves lucky that they could grab a point. The “luck” being that Arsenal and City both seem to have calamitous and disorganized defenses.

The second goal was criminal. Forget about ozil’s poor pass to Xhaka. Xhaka first just stands there for 2-3 seconds without tracking back. Silva starts to make a run on the edge if the box. Xhaka sees him but is now walking. Monreal who was marking aguero has no choice but to come mark silva on the edge of the box. This is when XHAKA STARTS JOGGING BACK. By the time he’s gotten to outside the 18 yard box the goal has been scored. That is criminal and for all his decent distribution I hate that laxity in a player.… Read more »

I noticed that too. Out of all the team only six players were there back defending. 4 players including xhaka and Sanchez just stood there watching. It’s almost like half the team don’t want to defend at all.

You’re right about Xhaka, but Nacho wasn’t in a 50/50 (Silva/Aguero) situation. He should have marked Aguero, Silva would be forced to cut inside and Coquelin was already there.

The position that silva was in was too dangerous. He could curl it far post,Thread a pass amd dribble as he did in the first half inside the first 15minutes. In the end he chose the right action. Credit to him but Xhaka and Ramsey can’t be starters with that kind of mentality on the edge of our box. Kante shines as he can do the simple things but to great effect

Spot on. The problem with them is their first instinct is to counter attack. Ramsey would have done the same thing in that position. The thing under Wenger is, his tactics are the same and he is never going to change them. He let’s the players make that decision – ‘to track back or wait for counter attack’. The solution is straight forward- 1. Either we bring in a new manager who will tell them to track back or 2. We buy players who are tactically good and have great stamina/desire. We do neither. A player like Xhaka is one… Read more »

Spot on. The problem with them is their first instinct is to counter attack. Ramsey would have done the same thing in that position. The thing under Wenger is, his tactics are the same and he is never going to change them. He let’s the players make that decision – ‘to track back or wait for counter attack’. The solution is straight forward- 1. Either we bring in a new manager who will tell them to track back or 2. We buy players who are tactically good and have great stamina/desire. We do neither. A player like Xhaka is one… Read more »

I feel same. It is like loosing thirst of something and also the mere fact that the management issue is not yet sorted out. I feel that Wenger is putting his legacy on the line if he insisted on continuing and fails to get better results next season. He will never be forgiven. I am not saying that he should not stay but if he wishes to stay, there are many changes that are required, both in the management and players level. He should cash in and sale Ozil. Per, Ramsey, Walcot and Wiltshere should all be heading out. Steve… Read more »

Yup that really irritated me too. Xhaka needs to buck up soon

Any thoughts of whether we should switch it up and go with a 3-4-3? With Gab and Mus going balls out as stoppers and either kos or bfg sweeping. It there was a player who was born to be a wingback it’s Bellerin.

Not normally a stats person to be quite honest, but found these to be very interesting none the less.

Still don’t really know what I think of the game, but we didn’t loose & that is the MOST important bit.

Thinking the new phrase “half win” may gain traction & popularity very quickly, especially amongst club management…Still not certain the owner even knows what winning is or even cares unless it’s used in a phrase such as “my investment is winning at the moment”. Onwards & upwards. Please for the love of god can it be upwards!!!

Little off topic but to see today the footage of Arsenal fans in the stadium fighting each other and outside attacking people from ArsenalFanTV who were just there doing their thing… outrageous. The clubs fans are going freaking mental … its like they have morphed into a psycho teenage girl who just found out her fella looked at another girl and she is hell bent on revenge at all costs.
Enough, this is bollocks. Its not what supporting a team is about.
In other news, Arsenal didnt lose. YAY I say.

Be Cool
Reply to  Ausdrexler

Its such a shame that the Arsenal Motto is written in Latin and not in English.

George
Reply to  Be Cool

Ausdrexler
Reply to  Be Cool

Something like ‘victory through harmony’ or similiar. Support the club, be passionate, but you cross the line when you start attacking fellow supporters. Its not the Arsenal way.

Hopefully on the other end of this painful tunnel is a winning streak that will lead to Arsene coming back with a much improved (Better result in the Uefa final) ‘Invincibles’ 2.0? The atmosphere around the club hasn’t been the most ideal. “Ozil’s the new Denis”, “Ozil’s a genius” “Ozil’s lazy”, “Ozil is a luxury player”, “Ozil shouldn’t be starting”,”Why is the old and confused Wenger not tying down one of our big players, Ozil”.. The media isn’t helping our course either, I don’t think the shxtty blue club in London got half as much criticism and attention (constant clickbaits)… Read more »

The way Chelsea players downed tools was classless. Professional players have an obligation to give 100% every game. That doesnt mean they need to perform at their best every game as everyone has form slumps etc but they need to be giving everything. If I was a Chelsea fan I wouldnt of been impressed with that squads commitment last season. I think the Arsenal players are trying their best, they just arent good enough.

Sanchez was often playing the Cazorla role.
Neither Xhaka (nor Coquelin) can be Cazorla.
But Alexis can be; he was bringing out the ball.