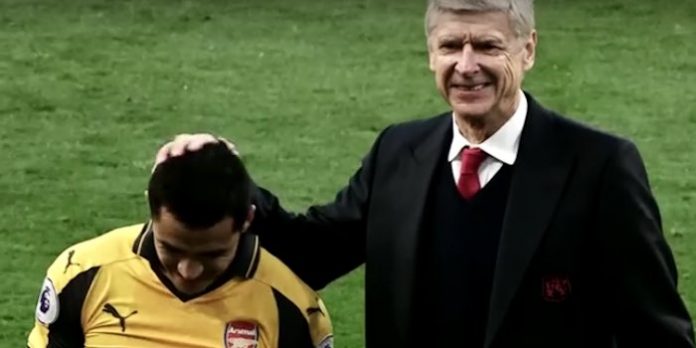 Earlier this week it was reported that Arsenal are preparing a record £300,000 week deal for Alexis Sanchez.

The Chilean has been the team’s most effective performer this season, scoring 22 goals and providing 14 assists, and with supposed interest from the likes of Man City, Chelsea and PSG, a mega-money deal could help ward off those suitors and help convince him stat at the club.

Asked about the offer at his press conference today, Arsene Wenger said, “First of all, I cannot confirm that we have offered that.

“Secondly, we will do as always. We have to consider our financial potential to sustain the wages for the whole squad.

“What is for sure is that what is paid per week today was 20 years ago per year. Will that continue to go up? I don’t know. I’m always tempted to say no but I was wrong on that front.”

Sanchez was also nominated for the PFA Player’s Player of the Year award, something that pleased the Arsenal manager.

“I’m very happy because it rewards a very strong season if you look at his numbers,” he said.

“His goalscoring record is good, his assists are good and I believe that the combination of goalscoring and assists always shows the quality of a player.”

I won’t be surprised if he ends up playing in China.

I agree. The only way that money would please him is if he thinks it identifies him among the world elite. More about status than the money itself

This 300k news sounds too bogus to be true. I think they’d probably offer him around 200k

Boss refuses to be drawn. In other news water is wet and Sp*rs are shit.

Problem we have got, is that Alexis wants money and trophies, not just money.

Its apparent Sanchez wants to be a successful player in a successful team, competing and winning trophies on a regular basis. If Wenger remains, as may well be the case, than that is all the evidence he will need that his ambitions are different to that of the Arsenal board and he will leave. Personally I believe these stories are being put out by the club to make its seem like he’s being greedy when he decides to leave. The average players in our squad will take the money, but top quality players like Sanchez won’t buy the bullshit of… Read more »

I reckon he will be gone in the summer, unless there is a change of manager. And everyone (me, you, Alexis, the whole world) knows that if he doesn’t sign whatever deal is put in front of him, then he will be sold. I don’t know why Wenger spouts bullshit saying we will keep him until the end of his contract in 2018. Does he think people are stupid thick planks that would believe Kroenke would let a £60m asset go for nothing? Contrastingly, I thought Koeman’s comments about Barkley were refreshingly honest – he said it was simple, if… Read more »

He has been honest of his various team’s assessments. If they did not play well, he says it.

Haha, ‘Stupid thick planks’ gave me a good chuckle, thanks.

Refusing 300k is being greedy? If he was greedy he would accept surely

Money isn’t the issue for Alexis. This guy is a winner and winning is all he cares about. Now I don’t know if Wenger wants to keep using him as a 9 or on the wing, if he’s back to being a winger, I say sell…we can replace him with a world class striker and a young winger with potential or Give Ox/iwobi a chance. This rumor is false. He is already leaving.

hehehe…so interesting seeing how people wish to see this.

Maybe this is naive but why wouldn’t Arsenal just offer him a contract like this with a release clause that activates if we finish outside the top 3 next year. That would allow Arsenal to still make a fair amount is he’s unhappy in a year and it’s a huge enough pay bump it’s hard to see someone turn it down. Pretty much what Liverpool did with Suarez. If he won’t sign that then you have to sell him as you can’t lose him on a free

Arsen Wenger’s statements about Alexis Sanchez’ salary reveals one thing. He’s blinded by his power and ego. The fact Arsen is remaining coach is enough to make sure Sanchez will be gone. Arsen is like a small child who stamps his feet covers his ears and closes his eyes and hold his breath and has himself convinced that no one else can see the truth and they will listen to his every word. He refuses to see what any reasonable person can clearly see. Arsen Wenger has lost touch with the team and refuses to realize that his time has… Read more »

You are not guaranteed trophies anywhere, however you have a better chance at a club who show the desire to win. That is not what we are currently offering him. Like many said money probably isn’t the motivator for him it may just be a tool to exit and make it look like the club doesn’t want to offer him such a deal or is capable of keeping top players seriously damaging our chance of attracting top talent in the future. 300k x 12 x 4 = 14.4mil so…put employer tax etc on top your looking at what 20mil over… Read more »

The problems​ at the club run so deep now, what happens with Sanchez – once all important – is beginning to feel almost academic.