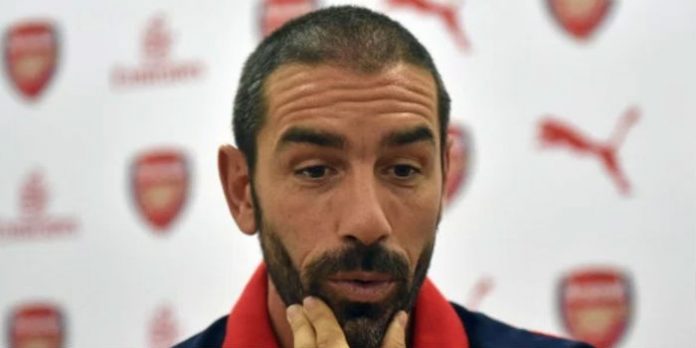 Don’t get too excited…but Robert Pires thinks Kylian Mbappé will sign for Arsenal.

Six months ago most of us would have shrugged our collective shoulders at proposed interest in a French teenager. Of course, anybody paying attention to Ligue 1 and the Champions League will tell you that Monaco’s 18-year-old striker is worthy of all the plaudits he’s received.

With 20 goals to his name, including five against Borussia Dortmund and Manchester City in the last two months, Mbappé represents European football’s hottest property.

Arsene Wenger is already on record saying he tried to snap up the player last summer and that he fears the attacker’s price tag may be out of reach for Arsenal, however, that hasn’t stopped Bobby giving an optimistic take on the situation.

“I do think Arsenal will sign him,” Pires told Bwin.com.

“The problem is how much. Mbappé has the potential to play for Arsenal and Wenger is the right manager to manage him.

“Monaco and Arsenal are very similar in clubs, so it won’t be much of a transition.”

Mbappé’s amazing form has seen him garner headlines across the continental press with many comparing him to Thierry Henry – also once young, French and a graduate of Monaco’s academy.

Despite being excited by his compatriot, Pires says such assessments are premature.

“The comparison is unnecessary,” said Pires. “He’s not ready to be compared to Thierry. Mbappé is a very similar player but to compare the two players would be unfair.

“I hope that Kylian can follow in the footsteps of Thierry Henry, he has the same profile as Thierry – quick, strong and a great finisher but he’s very young so I would hold off on comparisons just yet.”

Does Bobby know something we don’t know? Will this be his first present to the Gooner faithful after becoming the club’s new sporting director? Are we dreaming a dream that quite frankly is too dreamy to be taken seriously?

Even Pires says Arsenal are in trouble

You could also mention what Robert says about Mesut in this interview. Very interesting.

What did he say?
Would you share the link to the original article please?

In my view, this is a case of mistranslation or misqouting. What I think Bobby has been saying, is that Arsenal WISH to sign Mbappe (and honestly, who dont), and not that they WILL sign him.

“Wenger is already working on next summer’s transfers”

Seems strange for us to publicly talk about a player so much? Wouldn’t this normally be seen as ‘Tapping Up’?

‘I admire the player, yes, but he has a contract, I respect the contract’

‘A player like him, yes, he is top quality’

It’s the hope that kills.

I’m not holding my breath.

Will
Reply to  Paul

It’s the holding your breath that kills, nothing wrong with a bit of hope

Paul
Reply to  Will

I’m not holding my breath.

Gudang Pelor
Reply to  Will

Actually, no one can die by holding your own breath.

Yeah, as soon as you’re about to pass out, your muscles relax and boom, you start breathing again.

And when one holds his breadth………………… Under water?

We should break the transfer record for this kid if we have to… unreal talent and it feels like it’s important for the club to land a fish everyone wants. Getting Hazard was very big for Chelsea a few years ago

All about them renewals.

I hate the “we may not be able to compete’ stance.
I’d also be worried if we put all our eggs in the Mbappe basket as I think we need a fair bit more.
There’s literally no winning with me.

Pires …sadly has become part of the establishment now…and they use him to leak out ”alternative facts” to the fans..

If someone doesn’t renew their season ticket there’s about 10000 people waiting in line to splurge money in kroenke stache.. And that’s all he cares about. Getting splurged in the face and taking advantage of other people’s hard labour, embarrassment and suffering.

There is a 10 year waiting list for season tickets!

Yes but every year they always come up with promise to buy big players right before renewal.

Put on the list in 2014 and had a call last week saying i was in the top 5k and would likely get the chance to bag one for the upcoming season. Not quite a 10year wait!

To be honest, I’m already at the point where I’ll be heartbroken if we don’t sign him so may as well add some more false hope onto it.

Awesome player! if the likes of Giroud, Sanchez, Ozil do leave I would love to see us invest in such a talented player, however 4 or 5 more are also needed in my opinion Gk, LB, CD, CM, RW.

If they leave, we’re not getting MBappe.

Oh, so there are two of us here now. Bother.

Hope Wenger wins the fa cup and leaves on a moderate high.

If you beat City and Chelsea to win the FA cup, I call it big high.

If we add victories over Tottenham and ManU in the next 2 games, I call it a very big high. Would love it to hurt Spuds chance at the BPL title, and beating any Maureen coached team added to the fact it is currently ManU would be great. If top 4 becomes included, even better.

I would love Martial for £20M…

How many Welbeck do we need ?

Wouldn’t be a bad signing. What was bad was that he went to United.

Martial is like the new Jean-Pierre Papin, so that works too.

I think it is 20/30 million + if we would sell these players, we would have the money to buy almost any of the top strikers today…

One of our 3 keepers (Czech, Ospina, Szcesny)
One of our 2 left backs (if Kolasinavc signs)
One of our strikers (Giroud or Lucas)
2 right backs (Jenkinson, Debuchy)

Yeah, but those are a lot of players (and I forgot Campbell)…

That is 55M Euros altogether (according to Transfermarkt)

Couldn’t believe Jenkinson is allowed to reject offers and quietly earn his Arsenal salary. As to Debuchy, fans blame him but it is all Wenger’s fault.

That’s why contracts exist. To guarantee the player they can’t just be shoved off with nothing or helplessly subject to the club’s whim, and to protect the club’s investments from walking off for free – until the end of the contract that is.

Jenkinson is a good man who has taken an injury and as a result a knock to his form and confidence and may be unsure of his footballing future. It’s his right to honor his contract and do right by himself.

Bags of talent. If we can’t sign am exciting talent or an established talent outright then we are truly in decline. Ozil and Sanchez are gifts we didn’t think obtainable and were signed when we took advantage of the marker being that they were surplus.

It would be good to land one outright irrespective of the clubs in it for him.

Well the fans have been fleeced long enough and the club have been shrewd financially for so long. So when there is talk about decline it is meant in terms of the success of a club on the pitch. When you talk about how far “we” have come, are you referring to success financially or success in terms of footballing achievement? Because one is indeed successful whilst the other has (bar the FA Cup) been in a steady decline…..

I’m talking about the growth of the club. We’re massive around the world. We’ve had limited success, we all know that, it’s been a let down, but we’re in a position to compete. It seems to get ignored that we spent £35odd million on xhaka, mustafi, Sanchez and ozil in recent years. Just because holding only cost 2million, that doesn’t mean we’re being financially fleeced – quite the opposite surely? The ticket prices are a disgrace. Believe me I agree that they need to come down, but the demand is high, and despite what the media say, we’re no different… Read more »

He has a release clause monaco confirmed it, but nobogy knows how mych ans i think is 150mil which wenger will never spent whole budget on one player and rightly so.

But we did pay a British record fee when we signed the great Denis Bergkamp for £7.5 mil .

I doubt we’ll be breaking any records now though

Problem is we very rarely get a world-class player from our academy system. We get one Barcenal player like Fabregas or Bellerin in how many years compared to six or seven fully homegrown released every year?

That’s still better than most other PL clubs.

He can exchange champions league semi final stories with Sanchez and Ozil.

“Arsene Wenger is already on record saying he tried to snap up the player last summer and that he fears the attacker’s price tag may be out of reach for Arsenal”……… Dear Arsene, its not ur money to begin with. Just spend it esp if its kroenke’s money.

It;s not Kroenke’s money either

I think someone misheard the original French.

Thanks, that makes much more sense, especially given Wengers earlier comments…

Is there not a player on this planet that Wenger says has tried to sign yawn yawn ZZZZZZZZzzzzzzzzzzzzzzz………….

Mbappe to the future

I want some of what Bobby’s smoking and Kylian Mbappé. Am I greedy?

I suspect he’ll go to Juventus, have a miserable 2 years after which everyone will forget him, then he’ll come to arsenal