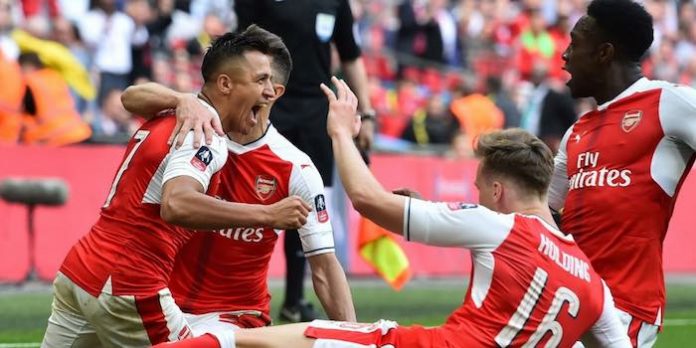 Arsene Wenger heaped praise on Alexis Sanchez after the Chilean scored an FA Cup semi-final winner for the second time in three years.

Sanchez grabbed an extra-time winner against Reading in 2015, and did the same today in the 2-1 win against Man City, sending the Gunners through to the final on May 27th.

It was a big game contribution from a big game player, and he drew the plaudits of his manager after the game.

“Alexis Sanchez was like the team,” he said. “He had problems at the start but became stronger and stronger.

“He is instinctive, he is an animal – always ready to kill the opponent. In games like that he never gives up.”

The manager was also pleased for the fans who have been through the mill in recent times.

“I feel when you see today and you watch the stands, you see how big this club is,” he said.

“I feel just happy when our fans go home tonight and they are happy. When I don’t win the games I feel sad because I don’t feel that I give what people want.

“We have gone through a very difficult period and we faced some adversity that made the situation more difficult from inside as well.

“But we’ve shown a united response, not a divided response, but of course, mentally we were in a fragile position.”

Tabloid newspaper headline: “Alexis rumoured to leave after Wenger calls him an animal”

don’t give them ideas

I was a study in self restraint sitting amongst the City supporters. Sweet, sweet victory.

Cage him in Ashburton grove for the next 4 years then.

It’s all still so fragile, but we can come through this together and strong. Here’s to top 4 and FA Cup champions!

In an interview on BT I think one of his answers was when asked once again about himself and the difficult spell: “I will speak about this (difficult) time one day” Well that will be damn interesting. It seems that some unity and cohesion is back – we will for sure see that on wednesday against the champions. Loosing in the manner we did against West Brom and Palace is not acceptable by any standards. We sure did not look like a team that doesn´t believe in the manager today at least.

Job not done yet, we still have to beat Chelsea and secure history yet again. If we do, it may more than half convince Alexis we have a bit of fight and that Wenger can transform the team in the summer. If not it will be a difficult (but not impossible) summer. Also to watch, the media prattling on about how we will not catch City for 4th. We don’t have to. We can catch their favorite perennial team in perpetual transition, Liverpool. We have 3 games in hand over them. If we should win all 3 we are level… Read more »

Alexis was frustrating today in most parts absent from proceedings but he was there when he most counted.

What fight shown by the boys!! Gabriel was immense. Holding as well. This is what we expect at least 95 percent of the time every season. Alexis came to life in the second half when Giroud got subbed. We shouldn’t be playing the 3-4-3 with Giroud up top. Welbeck/Theo has got to start. We can beat manure and spurs. Let’s do this. Looserpool are starting to choke. Soon spurs will join them

Gabriel was a beast!

Swept up everything. Sane is in excellent form but you would not have known it.

Pundits of course will try to play it all down. Daft lot.:D

Though he scored the winner,it shdnt gloss the fact that
he is inclined to hold on to the ball for a second too long. This allowed the
opposition to dispossess him.It could prove fatal like when ,if I aint wrong,Ramsey lost the ball and MC surged on to score.
The jury is still out.I believe Arsenal have shown incremental
improvement in the defence overall.
Hopefully things will turn out well. Btw,no 2 games are the same.

Criticizing Sanchez for something Ramsey did is a new one…

By far our best player. Both technically and mentally.

Alexis has come in for a lot of criticism, some of it justified. But we shouldn’t forget just how predictable our attack was after RVP left, how long we wanted a replacement for Eduardo, and just how rare South American strikers that adjust to England are.

What I loved about today was that the team carried the players. Guys like Alexis and Giroud didn’t start well, but as a unit we made up for that. if we can defend properly in the final, with Alexis we’ll always be in the game.

I’m still not convinced that The Animal is best played with Giroud. It’s a bit like playing with a lamppost. Welbeck is more mobile and can play wide, although he scores fewer goals than Giroud.
Chelsea are a far better team than City (especially when Silva went off) but anything can happen in a one off game. Anything except me being there to see it – over £500 and climbing for ticket tout tickets online already. (be careful I’ll go off on another rant about how that shouldn’t be legal)

I always compare him to the Tazmanian Devil actually!