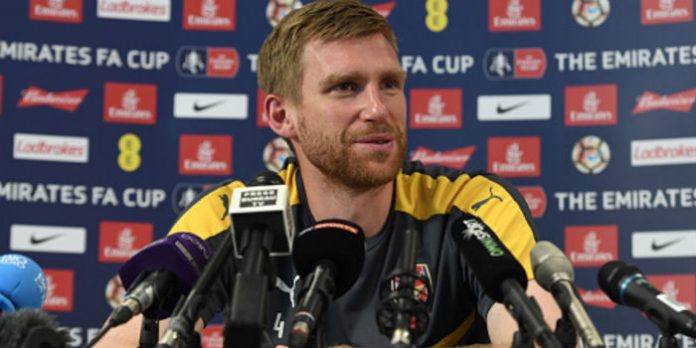 A week ago, Per Mertesacker had probably resigned himself to watching Arsenal’s FA Cup Final with Chelsea in the stands.

The defender hadn’t played a single minute of competitive football since April last year before being called upon for the dying embers of the win against Everton.

Now, with Laurent Koscielny suspended, injury ruling out Gabriel and Shkodran Mustafi a major doubt as he recovers from a concussion, the BFG looks very likely to start on Saturday.

It’s a huge turnaround for the 32-year-old, who insists he’ll give everything for the club he captains.

“I was out for half a year and not available so it was difficult at times,” Mertesacker told press on Wednesday.

“When I came back new year and started to train with the team, obviously, you want to give absolutely everything on the training pitch and try to support the team as much as you can.

“I wasn’t happy about the role, just being sidelined, but just keeping up with the boys, trying to lift them no matter what happens. We went through difficult periods throughout the season but this is really clutch now for us and I think everyone now is eager to play the last game and give absolutely everything for this club.

“I haven’t [really] played this year but I have done this for 15 years so I expect myself to be absolutely ready no matter what comes. That is my mindset, no matter what happens or what is facing me on Saturday, I am going to go for it.

“I owe this to this team and to this club. I want to make sure I will be ready and my mindset is 120 minutes plus penalties.”

While it’s not ideal to have to throw a player in the deep end like this, Arseblog News at least takes a positive from the fact the BFG has scored three times at Wembley, once for Germany to beat England in a friendly, the vital equaliser against Wigan in the 2014 semi-final and Arsenal’s third in the FA Cup final over Aston Villa. Not too shabby.

The World Cup winner also touched on the atmosphere in the dressing room, making clear that any uncertainty over the manager’s future is not adversely affecting his players.

“I cannot see any horrendous environment,” he explained. “We have been very focused on what is at stake.

“I think we players, we did not care too much what happened to the manager next year. That’s our job, and we’ve done it for a couple of years now.

“We haven’t been brilliant all season, when we have gone through ups and downs. But this league is about quick changes and you have to be ready for the next challenge, even when it’s not going for you.

“You cannot let yourself down or find excuses about the environment or the manager’s future.

“This is not my approach and not the team’s approach. I think we have to look at ourselves in the mirror and see what’s next for us.”

It would be Per-fect if he scores the winner.

Mbappe to the future

Step up big man. You were born for this!

Hope he hasn’t lost his pace.

Mbappe to the future
Reply to  Paul

Love it ! The BFG can leap entire stadiums. We’ve got this in the bag.

Love the man, and love what he’s saying, even if the reality is we’ll be facing the likes of Hazard and Costa with a desperately make-shift back line! I don’t think we’ll win the game, but I have no doubt our players will give their all. Can’t wait to cheer them on!

*BFG looks at himself in the mirror, smiles, then takes the top of the FA cup off in satisfaction*

Well that’s all I can picture from the last paragraph

You guys can do it, Mertesacker! Give them a good fight.

Playing 3 at the back suits him to say the least. Win or lose, i hope our boys give all they got.

I remember the season 12/13 when he begun to find his feet and he turned into this fanatic defender and team champion. For a while there he was this towering figure who was so easy to love. Then came the post world cup slump and general team malaise. He’s soldiered on and on a whole has been a fine defender for us. He’ll always be our BFG.

The fans owe the team a massive performance on Saturday

I’m starting to think Kos got a red so that BFG can play a part in the final.

I just hope they learned from the recent Kos mistake ( and earlier that both Per and Gabriel made ) though it’d be hard to tame the dirty Doggo Cost(aredcardpenalty)a and that Belgian guy on the pitchskis and also Fabregas… i’d suggest shamelesly parking a bus and trying from contras -Alexis,Welbeck,Walcott … assume they did start practicing penalties as well just in case

When they say arsenal doesn’t have leaders….yet there will be BFG,Cech,Sanchez,Monreal on the pitch on Saturday. I will be living and dying with every save,shot and pass!! #COYG

Maybe the stars are aligning for a proper end to his Arsenal career..
I’ve always thought 3 at the back would suit him perfectly

Unrelated to the BFG to whom I have nothing but respect…this article is about Usmanov. ..not a very nice fellow by all accounts and one I would rather was not involved with the Arsenal…I know…Kroenke and Usmanov…the choice between dying from the plague or from cholera…

Jesus, looks like it would be out of the fire into the frying pan with this guy, actually makes Kronke look a saint in comparison.

I hope he can get up top to head the winner in. BFG this is is your time!

What does “really clutch” mean?

The opposite of ‘handbrake on’. 😉

Lol the way the press were going on I thought he contracted the plague.

Should be fine by weekend surely.

Another option could be to go with full experience if Mustafi is available and play the 3 “M”s:

Or Holding. He has had some inexperience moments but has been generally good.

Play holding so nacho can play on the left. Sorry Gibbsie

And in the last minutes of the game when we’ve smashed them comfortably with a 3-0 lead let’s see Holding send Costa flying to certain injury even if it means a red. Give the diving cunt something to remember as he boards the flight to China.

I love this Big Fukin Gooner! Get in captain! Remember to take out the cunt Diego Costa while at it.