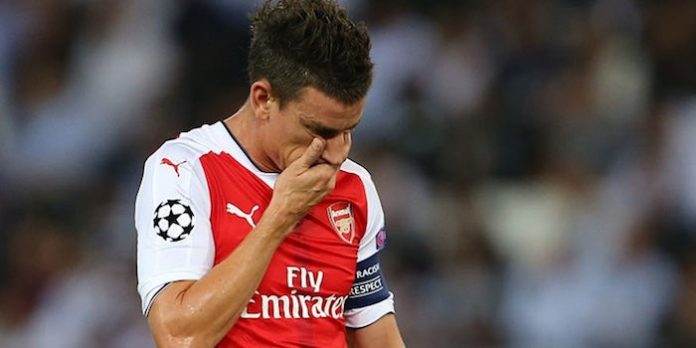 Laurent Koscielny has revealed that he will require daily treatment on his Achilles for the rest of his playing career.

The France international was diagnosed with chronic tendinitis in both feet back in 2014 but has worked hard to maintain a level of fitness that means he still plays the majority of Arsenal’s fixtures. To date, the 31-year-old has played 290 games for the Gunners – an average of 41.4 per season since he signed in 2010.

While the problem is, for the most part, manageable, at this time of the season, with games coming thick and fast, Koscielny recognises that it’s sometimes better to take a breather rather than put his body through undue stress. He’s expected to miss tonight’s game with Sunderland due to the problem.

“I have some problems,” he’s quoted as saying by the Evening Standard.

“Now it is better. I know it is a difficult injury because you need to work every day on this. Every morning I have my treatment for my Achilles and I know I need to do this to the end of my career.

“Now, every day I do this and it is OK but sometimes with all the games we play every three days, it is difficult and I need to have a rest to recover well for my Achilles. That’s why last time I was injured but now it is OK with this.

“It is not difficult but you need to be careful with this because if you stop doing your own exercise programme for one or two weeks, the problem will come back. I know now I need to do this every day to be fit for my team.

Back in April, Gary Neville questioned Koscielny’s commitment to the cause claiming the Frenchman too often quit the field of play during matches.

“Koscielny always goes off,” Neville told Sky Sports. “He’s a centre-back. He plays to half-time and then goes off. He might have a bit of a problem with his Achilles and I might be being very harsh, but he went off against Bayern Munich and went off in a big game today.”

In light of the latest comments by Kos, that judgement looks not just harsh but plain wrong.

Neville is… well you all know what
Playing through pain is something that Sturridge wont do for example. Any comment on that you f.. stupid pundits c…..

“Neville is… well you all know what”

Gary Neville is dishonest to his federation!

Is it just me or has Gary Neville gone a bit bonkers since his Valencia stint?

Even Thierry has said some (slightly) daft things. If you talk that much as a pundit you are bound to, plus the TV companies want some controversy to get viewers.

I was thinking the same thing. Before Valencia he was a great pundit with really good analysis, ever since then he’s jumped on the bandwagon of saying something controversial for the sake of clicks. Shame really

“Koscielny always goes off” Based on 2 games?! STFU

Bosscielny is a complete defender. Not surprised that Sol Campbell said only him and Alexis would make the Invincibles team.

Kos is A Boss.

Gary Neville is a twat. However this is one of those cases where I get annoyed and frustrated with the club and Wenger. Chronic tendinitis is a self-inflicted problem, usually caused by chronic and excessive loading on the tendons (over use). This almost certainly started and stems fro that time a few years ago when he played a whole season barely being rested (sounds familiar?) then it developed the next season. What made it worse was the use of steroid injections to manage the inflammation (standard I guess), but that was the season Wenger went into the season with just… Read more »

I was under the impression Koscielny had a skeleton made of adamantium after that season. You could tell he was impaired physically but his level of commitment never dropped. Hope we manage him properly because he deserves a Premier League title before he retires.

I agree with you on the frustration part, but this is common in almost any sport. When you have an amazing player like Koscielny, you want to clone him ten times over. In the end, most athletes develop some sort long term injuries, even the Sunday leaguers. Arsenal have had a history of this, but a lot of it comes down to squad depth which is something we rarely seem to have unless it is attacking midfielders. I’ve noticed that there seems to be a trend popping up in the PL. I’ll watch the pre-game handshakes and notice that the… Read more »

Blogs says there’s an automated system to keep the site free of trolls, Sp*ds fans and people who use the phrase “fake news”. And it’s all checked quite often so any innocent comments will turn up eventually.

Ah its a weird one, I’ve had similar comments not get posted and I can’t be bothered to type it up again, but was really passionate to share this one and really didn’t want it to disappear once more. It’s just frustrating because many of us were calling it for what it was when it happened. Now I know the nature of sports means you have to take risks with player bodies. Having them rest for weeks mid season may be necessary, but not when a player isn’t needed and results is all that matter. Kos is as important to… Read more »

Neville is a right cvnt.

My only concern is the twilight years of Bosscielny, our legend. He may be looking at a permanent pain at his Achilles just because he was a proper and faithful servant to the Red and White.

What is Graham Dougan’s opinion? I think he is a modest pundit.

a different George
Reply to  truj

I would guess that Graham believes Koscielny’s unwillingness to play when he is in horrible pain and cannot actually help his team is typical of foreigners.

Feel for this guy…great character. Boss!

Sorry, I just thought someone would’ve already done it.

Despite having to deal with his Achilles, I still consider Koscielney as the best defender in the Premier League. La Liga has Diego Godin and Pique, the PL has Koscielney.

I just can’t help but think the gulf in class between that miskick in the carling cup final against Birmingham(i think?) and the way he regularly chucks strikers out of his pocket after the 90 these days..

As usual, Gary Neville is just a stupid cunt looking for a soundbite without knowing fuck all about what he’s discussing. Can someone please just put him out of our misery and assassinate him?