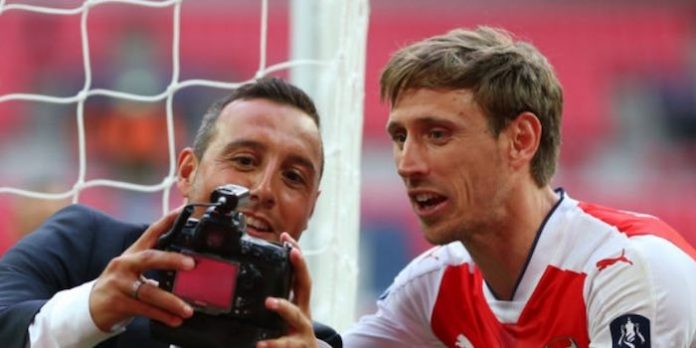 Santi Cazorla has described this season as the worst of his career, and revealed that he’s had eight operations on his Achilles since November.

The Spanish international aggravated a long-standing problem against Ludogorets that month, and while it was hoped he would recover quickly, he didn’t play again.

His problem required surgery, then more surgery because of complications, and he’s been under the knife a whopping eight times since then, including another one this week.

Speaking to Cadena Ser, Cazorla said, “It’s been a difficult season. Since I last played in November, I’ve been through surgery eight times, the last one yesterday, and hopefully everything will go well.”

Explaining what had gone wrong, he continued, “I have had complications: I picked up bacteria in the operating room, the bone got an infection, the scar did not close and I had a skin graft.

“You feel like throwing in the towel, but desire to play football comes above all else.”

“They were very good to me,” he said. “They renewed me before I operated, the boss talked to me and gave me peace of mind.”

As for when he might return, there’s still not much clarity.

“I have not been told deadlines,” he said. “It is very difficult to put exact dates, but I don’t think it will be more than five months.”

All we can do is wish him well, and hope he manages to make a full recovery.

Holy crap, that means he will have been out for a full year. Really miss our Santi.

Another Yank
Reply to  Red-Wing

Rosicky, Santi, Diaby, Eduardo, Ramsey, Wilshere, BFG,Theo, Verm Welbz, just off the top of my head, all with varying degrees of injuries the past few years, but why do our boys always get maimed in the most long term ways?

It’s surprising that a professional footballer’s surgery room wasn’t sanitized better. I seriously hope he gets a testimonial at Arsenal, it’s been a long time since we had one and it would be fitting. Proud to have him at Arsenal.

It has nothing to do with being a professional footballer; your chance of picking up an infection in the OT does not depend on your profession.

However the consequences for Arsenal fans are huge. 4th was guaranteed if he was playing the whole season.

Can we sue the hospital/surgeon?

Arsenal til I Die
Reply to  Pedant

So highly do I regard Santi that believe if he was healthy the entire season we may have won the league, either this year, last or both. We were cruising up until his season ending injuries in both those campaigns, then the wheels fell off and we lost the plot. Sanchez is our warrior, Santi is our heartbeat.

What does depend on your profession and the money you earn is the level of medical care(and their standards) you can afford. The chances of an infection being present in the surgery room at top class hospitals would be much less, compared to say a general hospital in most countries. Hope it’s obvious enough now.

Indeed, i dont know much about surgery, but contaminated by bacteri during it looks fucked up to me, unprofessional.

It’s not uncommon, Operation Room infections are one of the harder problems that medicine is trying to crack today because the infectants have started mutating to resist even the best sanitation practices at alarming rates.

The risk goes up exponentially with successive surgeries. Eight in a couple of months is mind-boggling.

Thanks for clarifying, what an unfortunate events because i remember he’ll fit again in August not November.

It can happen to anyone, in any hospital and with any surgeon. Bacteria doesn’t just exist on solid surfaces you can sanitize, it’s in the air and we carry masses of it in our bodies, breathing it in and out.

Infection & bleeding are probably the most common complications of having a surgery.

This is not to say that those complications aren’t meant to be avoided, just that they do happen.

Should make no difference whether it’s a pro footballer or a jobseeker getting NHS treatment.

Infection risk is present in any surgery & techniques are undertaken to minimise that but there’s never a guarantee in any case. I doubt it was due to the surgeons taking shortcuts.

Thank god for this comment. So decent and accurate!

This might sound like a stupid suggestion, but has anyone every thought about encasing the area to be operated on in a vacuum (like a human vacuum chamber)?

Actually, I just remembered that it is supposed to be incredibly expensive to achieve a 100% vacuum – the costs go up exponentially after you hit about 99%. Scrap that idea.

A vacuum would probably wreak havoc on an operation…namely since you’re opening the human body up, which is not a vacuum. Would destroy you from the inside, especially if you’re getting operated on your respiratory system.

Just for the sake of accuracy I think Shawcross has actually suffered quite severe back problems and has been out for long periods. I often find myself in a gooner bubble thinking we have the worst injuries especially long term but I suspect the truth is not quite as clear as that. Utd for example have had horrendous times. Chelsea do seem to escape it somehow. Robots.

So not playing until November!? Such bad news for someone that was arguably our best player.

Hope he comes back strong and isn’t affected by all the surgery.

Love this guy. Hope he gets well soon. He is one of AW brilliant signings. So much talent at the right price.

Absolutely gutted for him.
What a player! If this guy is not an Arsenal legend..then who else is?
Love him to bits.
Boy did we miss him so dearly this season!
It is extremely unfortunate that players like him and Koscielny haven’t yet got that cult status in our club just because they don’t have a major title to show off.
I want us to win the title atleast for the sake of Santi, Koscielny and BFG.
Absolute Legends.

Poor Santi he has my sympathy, I know a bit about skin grafts having had a major op on my leg which required a graft due to infection the pain from the area the graft is taken from is worse than the op site itself ,my graft failed meaning I had another 5 ops before it was sorted came close to losing the leg and I still have no feeling in my foot or lower calf ! And that was in 1998 ! So for the perpetually smiling Spainiard to recover for next season will be a feat in itself… Read more »

At this stage, with the new contract and many players rumored to leave, it feels like we are in the rebuilding stage – not the “one or two player” stage.

Get well soon, Santi. ?? Hope you will make a successful recovery asap. It was great seeing you at the FA Cup final celebrations last weekend.

I really feel your injury contributed to our failure to qualify for the Champions league. There was no replacement for you. Get well soon my man. Hope Ramsey doesn’t disappoint in your absence like he did when you just got injured.get well soon Santiago.

Santi will be LANS in January transfer window. Get well soon!

All the feels… miss you Santi 🙁

‘“I have had complications: I picked up bacteria in the operating room, the bone got an infection, the scar did not close and I had a skin graft.’

I met him a few years ago at the Emirates when he was sidelined with injury. Such a genuine guy with a love of football who will take time to interact with the fans.
Feeling really sorry for the guy, and hope he gets a solid second half of next season that helps drive us to win trophies!

Do you reckon Santi would be better suited in the middle with Xhaka? Or Rambo?

This kind of thing seems to happen so often to Arsenal players (having complications from “procedures” or injuries upon return from other injurieis). Poor guy, such a class act and so enjoyable to watch play. I can think of few players that show such joy when playing that Santi does. Certainly would have been a different season for Arsenal had he been playing most of the year.

This brilliant man does Not deserve such shit luck!