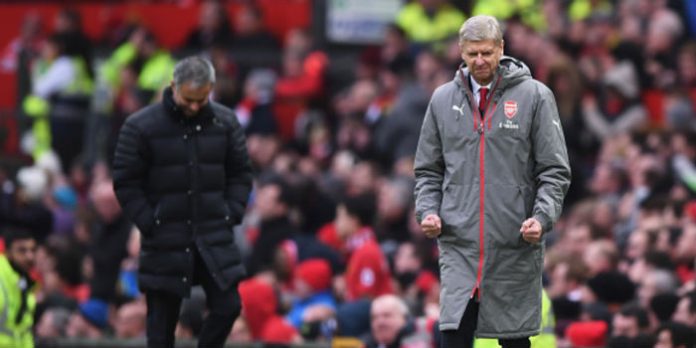 The Gunners could reach 75 points if they win their remaining five fixtures – a total they’ve matched or beaten in ten of the last 20 seasons – starting with victory against a Jose Mourinho side that are currently unbeaten in 25 Premier League matches.

Reflecting on the uphill struggle ahead and the upcoming clash with the Red Devils, noted:

“The problem before [the north London derby] was that the clarity was if we won all our games, we had a good chance of being in the top four.

“Now, even winning the games doesn’t guarantee us that]. It’s not in our hands. That’s all we have to achieve.

“It [United] is a big game. Of course every big game boosts your confidence, but for us more than focusing on the fact it is Manchester United, a big club and a big rivalry over the years, what is important is to have the chance to achieve our target. We have no choice, we have to beat them.”

On the competitiveness of the 2016/17 season, the boss added: “It just shows that everybody has moved up and the number of clubs that can fight at the top is bigger this season and the difference between the teams is smaller.

Three fun facts ahead of Sunday…

Time for a puppy cuddling a kitten we think…

Stick to the puppys

My money is on the kitten

No idea why, but I’m not too worried about this one. We can take them.

Yeap, piece of cake cause Wenger will win Jose on tactics…

As a cat-aholic, I am very happy to see a kitten in today’s article. Yes, puppies are cute, but I’m more of a cat person. I don’t know if u MrBlogs are slowly coming towards the cat side or not, but it always warms my heart to see cute kitten pics. Thankyou for helping us through these tough times.

ain’t gonna happen. Put your house on that.

That’s an insult to the puppy.

Dogs are just the best. Unconditional affection even when u are in a shit mood. I would happily start a young boisterous boxer up front v utd rather than giroud.

“We have no choice, we have to beat them”….that is if we can beat em

Don’t worry guys and gals, United are without key players so they’ll probably have to field an unknown teenager or two.

Never mind. As you were.

I like it when it is not in our hands. Other teams perform better for us.

At the start of this season, there was a lot of talk about not only new and exciting transfers but this glut of managerial talent on our shores. Pep, Jose, Conte, Jurgen, Poch, even Koeman were touted as exciting managers in relatively new positions with fresh ideas and perspective. 8 months on and Wenger, a man with 20+ years experience, comes firmly at the bottom of that list, his ideas outdated and his methodology no longer coherent. The world has spun a lot in a decade, a decade in which all these managers have risen to the top, and Wenger… Read more »

For gods sake , stop channeling your inner Souness. Managers who can foresee the development of players for modern football requirements form ages 16 to 36 and managers who financially keep their clubs next to Madrid and M.United in terms of revenue is not some schmuck…. Do players have/carry no responsibilities? I have hardly seen anyone blame players who fuck it up all the time. Wenger’s ‘crime’ is that he is too nice ..too human…not that he is not a good manager lets get it right. I would have brought lehman and keown and released them in the dressing room… Read more »

I’m sorry, I thought the job of a manager was to keep the team competitive and fighting for the top trophies, not making sure we are competing with the top clubs for revenue.

Is there a top manager or club that Wenger has a better head to head record against?

“Of coarse every big game boosts your confidence”

United are not particularly strong defensively, particularly their Cbacks. That said, we will likely have a suspect midfield. Sans Granit, Coquelin-Ramsey have never been terribly convincing. BUT : 1) Elneny is mediocre. He gets pushed off the ball too easily and makes short side way passes that 7amkickoff will advertise as great passing completion. 2) Ramsey was decent against Spurs. 3) Coquelin may thrive better with the 3 behind him. I think the key will also be for us to find better balance with our width. Wenger made the atypical inexplicable decision to play Gibbs against Spurs. I think we… Read more »

Ramsey was decent against spurs. We got murdered in the centre and other than a shot that he could maybe have slipped Gibbs in and a pass to Theo late on he was shit. The commentators kept mentioning him in the first half as he was running up and down and as usual it seems that turns into decent game.

United qualify for CL if they should win Europa.

I don’t think we can’t attract players if we are out of top 4 but it may mean we have to spend more for some players and it may then mean we buy even less than we should.

Top 4 will go down to the wire. If we should make 5th spot and United are in top 4 but win the Europa,it may cascade down to us.

Everybody hasn’t moved up. What does that mean? We’ve moved down, Arsene and you are responsible.

Well Arsene, I wouldn’t say that *everybody* has moved up…

Would be great to get the 3pts, but promised the misses I won’t get wound up if it all goes tits up like last game. Coyg

Just admit that you are no longer able to perform in a management role and resign. Silent Stan and Gazidis can f off too!
Fatgooner was always right!

Hard to predict this one. Mourinho is consistently getting draws out of his mediocre side. Meanwhile, Wenger is consistently not getting the best out of this Arsenal squad of late. We are not seeing the best of any of our attackers really. Giroud is playing in the wrong type of games and is not really best utilized in games where there is more space for runners like Theo, Welbz and Perez. Despite being our most prolific attacker, Alexis has not performed consistently either. If we get the selection right, we will beat Man Utd for me. If we fail to… Read more »