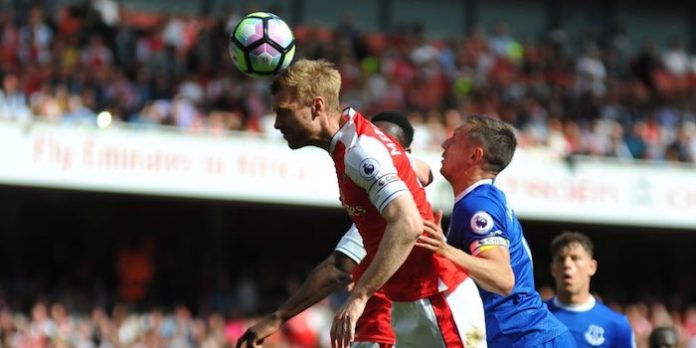 With defenders dropping like flies, then getting up and flying into spider’s nests, Arsenal’s defensive options are limited for Saturday’s FA Cup final against Chelsea.

Such is the crisis, Per Mertesacker could start his first game of the season having missed almost the entire campaign with a knee injury.

Arsene Wenger is not yet decided about what he’s going to do, and when asked said, “Per has the leadership qualities but I don’t know as he has not played 90 minutes for a long time.

For some reason there also appears to be a question about who will start in goal. The choice is between Petr Cech, who has been playing really well recently, and cup keeper David Ospina who hasn’t played a game since the 2-2 draw with Man City at the beginning of April.

Asked about his keeping options, Wenger said, “In the semi-final Cech played. Will Cech play against Chelsea? It is possible. We will see.”

We’ll see soon, but imagine picking Ospina. There’s no way that could happen, surely. Oh, I forgot, this is Arsenal.

But put your house on Cech.

Wright on the money

Well I don’t think we have much option to play him or not as we have no defenders left.

I say give him a game he is a good player and will win most the balls in the air only problem is pace with Holding and Mert playing.

Gooooooooonnnnaaaaaaaaa
Reply to  Wright on the money

Mein Bergkampf
Reply to  Wright on the money

I love that Wenger is still trying to keep his cards close to his chest despite the fact everyone knows he has only one choice. Arsene “Heads or tails” Press “Tails” Arsene “Nope” Press “Heads” Arsene “No… er… I did not see it…”

Mein Bergkampf
Reply to  Wright on the money

“Arsene, will you be breathing air today?”

“Zat is a possiblity, yes. But nothing has been decided.”

GunnerYY
Reply to  Wright on the money

Should go with Mustafi, Holding, Monreal.
Still not sure with Mer, he almost didn’t play any game this season, it’s a risky move to play him for Saturday.

Agreed he looked a step or two behind against Everton

IamaGoober
Reply to  Wright on the money

I like Per, I think he definitely has a place in the squad, and when applied against the right teams he still has his uses. Obviously his big issue being he lacks so much pace, which ironically makes him really good at reading the game, but with that being said, its obviously worrying since that’s probably Chelsea’s biggest offensive weapon with Hazard, Pedro and Willian on the break. If Per does play, which he probably will, we will probably have to sit the team a lot deeper in an attempt to protect his lack of pace, because lets face it,… Read more »

Guessing it will be Mertesacker, Holding, Monreal as the back 3 with Ox and Bellerin as wing backs… Any more word on Mustafi at all?

There’s no way Mustafi will play if he is having concussion symptoms. Those can take up to months to recover from depending on how bad it is.

I play rugby, concussion sucks but 2 weeks maximum, never heard of month long concussion symptoms. Mustafi will be playing if it’s only concussion.

Jonyb – look at the NFL in the US. There are many players who end up not playing for long periods of time. The Green Bay Packers had to sit out the entire season this year following a concussion. If you treat them seriously (and many sports do not) then they are serious. Just look at all the CTE issues with former NFL players.

Green Bay had a player (Sam Shields) sit out the entire season. Head trauma is a much bigger deal than a lot of people make it.

Holding, Mustafi and Monreal for me, that’s dependent on Mustafi being back from concussion. Problem there is we lose Monreal at LWB, and he’s been excellent there. Tough decisions either way

Wright on the money

Is the Ox fit to play then?

If Mustafi is fit, him holding and BFG, with monreal at wing back. If not, Holding, BFG and Monreal, with Gibbs if fit at wingback. I know he doesn’t have much in the final third but look who we are playing. We need a solid defence. Oz on the wrong side just off injury is insane. Iwobi as wingback, or wellbeck, less so but really emergency options. Ainsley maitland niles, if both Musrafi and Gibbs are crocked is my preferred choice. Boring I know, but not conceding is as important as scoring.

No way
Reply to  ArsenalManitou

If Gibbs is unavailable and Monreal is at centreback then I think we will see the ox at left wing back.

I wonder what the rules are on recalling Chambers? Legally he is still with Boro I guess(

chambers is cup tied, he play for boro in the fa cup

He already played for Boro in the FA Cup. Our other option coulld be Bielik. But it’s hilarious to think about this kind of things.

Its a gamble . He is easily turned over and will commit afoul leading
to a penalty.I believe if its an open game,Arsenal will lose.
Tactically,the fm has lost it and has consistently refused to tweak it.
No need to elaborate. Chelsea are stronger defensively and if the gunners play a cat and mouse game in the box,dont be surprised they concede an early goal and go on to lose.
20 years at aany club is along time . Hopefully the fm will know his time s up sooner rather than later irrespective of the result.

I don’t think it’s possible to ask Mertesacker to play 90 (or even 120) minutes after playing less than one half of football since last spring (though I’d love for him to win it for us on penalties, right after John Terry slips and misses his).

Assistantref
Reply to  a different George

While we’re asking, I would like to a request an own goal where Welbeck takes a shot from less than 2 yards out, slices it horribly, and the ball flies straight into John Terry’s face and then into the goal.

This would be a high chance of happening to be fair with the way Danny shoots. hah

No way
Reply to  Ausdrexler

Well, terry isn’t playing, so dat can only happen in ur dreams

No way
Reply to  a different George

Why not he’s been fit for months. Even If he spent the entire match sprinting at full speed he’s unlikely to cover more than a couple of kilometers, shouldn’t be a problem for a professional athlete

Just as well Wenger kept Per.

I thought he would have been let go last summer.

If Mustafi recovers, we can play :

I think we need to play Ox inverted as a Left wing back. No GIbbs please. We need to balance out threat on both wings with Bellerin and Ox.

So, if Mustafi is still injured and Mertesacker unlikely, how about we start like this:

I’m not sure what the legalities are regarding playing a Goalkeeper as a Defender? But maybe we can play Rush goalie ?, that’ll bamboozle them, they’ll never see it coming.

A goalkeeper can definitely play as an outfield player. David James wouldn’t have played as a striker under the managerial genius that is Stuart Pearce, otherwise.

In the Premier League players are just players who can play anywhere, unlike some competitions (like the world cup) players are specifically registered as goalkeepers – I think North Korea tried to register an extra outfield player as 1 of their keepers.

and the FA cup

In all honesty I don’t think there’s any law in the game against how many natural keepers are on the field. While there is only one keeper at any time (ie. can handle the ball in the box), I don’t think there’s a limit on how many times the keeper changes so, provided the ref is informed and the ball is out of play, you can swap your keeper for an outfield player. There’s likely also a need to change kits to make this change clear, but there’s nothing to stop you from doing this in a match.

So we’re now looking to play the cup final using swap through goal to get your breath back!

I wasn’t genuinely advocating the use of Ospina and Martinez in defence. Though judging by the responses it’s not a totally implausible idea.

Would be rather insulting to Per though.

I think it depends on if Mustafi recovers before Saturday…

From having too many Center backs to wishing you still had Paschal Cegan! Only at Arsenal

Also, we need to leave th chance of a sub on in extra time so we can bring on Ospina as we know Cech can’t catch a beach ball from the penalty spot

Watch any penalty shoot-out. Players sometimes miss under pressure, firing high into the crowd, or roll the ball lamely for the keeper to stop easily. But a genuine “save?” Almost never.

When Man U played Chelsea a month or two ago didn’t they use Herrera to shadow hazard? If coquelin shadows hazard then you’d be able to play with a back 4 of bellerin – holding – bfg/mustafi -monreal.

The player to man-mark Hazard, if Wenger decides to use this tactic, is Ox, not Coquelin. You need someone with pace, but who is physically strong and who can also do something dangerous when he gets the ball. Not sure Alex has the discipline for this, and not sure it is the right tactic in the first place, but anyone who watched Coquelin desperately and unsuccessfully trying to stop Hazard by fouling him on his way to scoring will not want to see that repeated throughout the game.

The one who least wants to see hazard score will be the coq himself. More than anyone else on this team, I’d trust coq to do the job. I’d prefer to see ox further up the pitch rather than being preoccupied with hazard the entire game.

No way
Reply to  Dutch Gooner

You really think arsene will select someone just to man mark?

Arsene may try and slip the Coq into the back 3. If Mustafi has had concussion there is no point risking him.

I would play Monreal, Holding, and Mustafi(if fit) / BFG (pretty much last resort and just imagine the space being exploited by Fabregas and Willian). Wingback would be Bellerin and Ox on the left. Ox has pretty good weaker foot skills and can cut inside.

No way
Reply to  derek

Fabregas and willian will both be on the bench

Playing Ospina in goal would be a recipe for disaster in view of the crisis we have in our defence. We hope for the best on Saturday.COYG!

No way
Reply to  Teryima Adi

You could have just ended the sentence after disaster

If we play with a helium inflated ball and all Per has to do is reach the floating sphere with his Lenghty German dome, we’ll be fine.