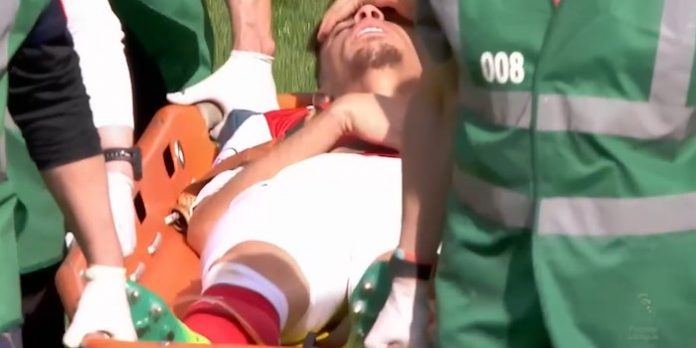 The Gunners will be without Laurent Koscielny after his red card on Sunday against Everton, and there are other defensive worries due to injuries.

Gabriel had to be stretchered off on Sunday, and although he’ll miss the final the news is more positive than expected.

“Gabriel is out for 6-8 weeks,” said Wenger. “We had a scare about his cruciate, but it’s only his medial ligament.

“The positive is he avoids surgery but he’s out until the beginning of August at least.”

There are also worries about Shkodran Mustafi, who remains a significant doubt because of a concussion he suffered against Sunderland.

“Mustafi we have some worries about,” he said, “he’s still sick and has not trained yet.”

There’s some good news though, as Alex Oxlade-Chamberlain is back in action, and could be considered.

“”Chamberlain is in contention because he’s back in training, ” said the boss, before admitting the loss of two central defenders has been a blow.

“We have been hit hard, but we have to find solutions,” he said.

“Hopefully I will find that.”

Mustafi linked with Lazio, Sokratis to Napoli off

Ox on the left?

Bellerin on the left!

I suspect Ox will be hampered less offensively on the right than Bellerin than will be, but I also suspect Bellerin defensive contributions will be less hampered than Ox’s. Either way they both seem like better options than Gibbs is atm.

I’d say, have a back three of Bellerin, Holding & Nacho and play OX & Welbeck as RWB & LWB respectively. With OX & Bellerin we have enough pace to counter Hazard & Alonso and with OX & Welbeck as Wing backs Chelsea would be wary of our threat too. Once again, I’d say we should play Alexis up front with Iwobi & Ozil. But in this set-up we would need more defensive reinforcements (as both Ozil & IWobi aren’t so defensively aware) so probably Coq over Ramsey! Let’s catch Chelsea unaware!

With our defensive problems, it is critical that Coq plays.

So, in summary, would I be correct in assuming you are saying…….

6 CBs and only 3 are available.

The sole reason this season was such a big disappointment….we must have had the most complete team since I don’t remember when…except for RB all other positions were stocked

Bellerin being the only real contender. We knew Jenkinson wasn’t going to play before the season began, and we also knew that Debuchy wasn’t going to be doing much either. Maitland-Niles is a youth prospect still, and although promising in his showings, not nearly experienced enough to make the role his own (yet). So that list looks nice, but it’s just a list. It’s a real problem though–I wouldn’t want to start Gibbs, but who would we put in his place on the left to counter Alexis’ generosity with the ball going forward? Defensively, Ox may be a little suspect… Read more »

My starting 11 would be:
Cech (although I’m not 100% sure that he will play, as according to Wenger Ospina is the Cup Keeper)
Holding, BFG, Monreal
Bellerin, Xhaka, Ramsey, Chamberlain
Özil, Iwobi
Alexis

Ospina is off in the summer. Not like the fabianski situation where he’d been at the club for years and been through a torrid time. Cech to play for sure

Actually I think it’s pretty similar to the Fabianski and Szczesny situations. Both left after the final and Wenger nevertheless have preferred them to his actual number 1 keepers in those seasons. Wouldn’t be too surprised if Ospina will be in goal. But also think it’s more likely that it’s going to be Cech, especially as it is against those blues.

I would make following changes to your 11: Sanchez on left, Giroud upfront or Welbeck on left and keep Sanchez as CF. We need more goal and aerial threats.

I really like Giroud but he makes our game definitely more static and that’s something we can’t allow us to happen against a very defensively sound Chelsea side. I would prefer Welbeck to him in that game but the problem with him is that he’s not exactly on a good run when it comes to his finishing. So I would put Alexis as close to the goal as possible. And with Iwobi and Özil behind him, and even Hector, Rambo, Xhaka and the Ox behind them we should have enough goals in us without either Giroud or Welbeck. if not,… Read more »

I’d move Sanchez to the left as you suggested, but keep him there regardless of whether Giroud or Welbeck goes up front.

There is a solution, bring on the BFG!

BFG, Rob, and who will be the third if Mustafi is out? Probably Nacho, which would mean again Gibbs as a left WB.
Honestly, I would prefer to switch back to 4 at the back: Bellerin-Holding-Per-Nacho. This will solve the dilemma “Ox or Hector”, as Ox can find a place on the right wing.

What you’ve said makes a lot of sense and in other circumstances people would agree. But the formation change resurrected our form to such a degree, and given Chelsea also play it, I think switching back here would be a huge risk.

Well, it is not like switching to a completely new system, I am talking about the formation the team was playing in the last years 🙂

Anyway, looking at all the minuses my thought got, seems the idea is not very well perceived. Anyway, let’s score the goals, no matter the system!

It will have to be Holding, Mertesacker, and Monreal at the back. Think about that for a second. Think about how incredibly messed up that is to be fielding such a trio — a kid (though promising), a guy who hasn’t started in a year, and a makeshift CB — against the likes of Hazard and Costa.

We were underdogs before these injuries / suspensions. What are we now?

Got to Start with back four of Bellerin Mustafi if fit or holding monreal on the left… Can’t start with back 3 with the amount of injuries and suspensions..

If we don’t have enough defenders to play with back three, then the compromise might be too big. And we will need to play Gibbs while one of Ox/Bellerin will sit on the bench.

This is bad. It’s more than a week since Mustafi got injured and he hasn’t trained yet. I am really afraid how this final gonna turn out without two of our best defenders.

Think we might be looking at Holding & BFG with Bellerin and Monreal in a back four.. Otherwise, Monreal could join BFG and Holding in a three and bring in Gibbs as LWB and then Ox / Bellerin as RWB unless AW thinks Ox can function as well as a LWB, then him and Bellerin with Gibbs on the bench. Really not sure any of the above combos are ideal against Hazard and Costa though!

Well said! I really think that Bellerin is a valid option as part of a back three if Mustafi’s not fit. Otherwise we will be DESTROYED on the counter with BFG and Holding severely lacking the pace to make up ground.

Last-minute towering header from the BFG for the winner!

Holding-BFG-Monreal at the back and Bellerin and Gibbs on the wings? Gibbs problem is that he can’t cross a ball, same time I dont’t think Ox with left is much better. And Gibbs is better defensively.
Is Debuchy alive? I think in theory he would be okay as a right sided CB in 3 at a back system.

if Chelsea start running away with this, end costa’s career, That will be a successful end to the season.

He should just leave the club along with his ill luck

atleast it seems xhaka and sanchez are match-day ready…

As it stands Wenger might go for
Back 3 – Monreal, BFG,Holding
Wingbacks – Bellerin and Gibbs
Ramsey and Xhaka in midfield
Upfront – Alexis,Giroud,Ozil

With the idea of Welbz for Gibbs and Ox for Giroud in the second half.

If Mustafi is fit i think Monreal will play wingback and Welbz might start.
Eitherways, i will be surprised if Wenger starts Ox.

if it’s going to be monreal..bfg…holding ,then i would like to see a start for coq instead of ramsey.

Not much choice other than something like this then really;

Though I think Mustafi will be ready by Saturday and BFG will be benched again.

What about Alexis Sanchez?

In my opinion we need to stick to the back 3 and if that means Monreal, Per and Holding then I think that is what it means. We can hope to have Mustafi back so Monreal can play left back but I don’t think we can rely on it and I don’t think we can change formation at this late stage when it has been bearing fruit. I think mentally this team are still fragile and frankly I don’t think they could handle the shift. I don’t know if no news is good news on Xhaka and Sanchez but I… Read more »

May sound stupid but is calum chambers available now he’s finished his loan ?

Probably cup tied. I’m too lazy to google it 🙂

you are correct Mr. Ricketts

Also what about playing coq at right centre back ?

Tony Adams is out following his negative comments about Arsene otherwise he’d be a shoe in.

All am after is to see us win this game on saturday,it does not matter which play get involve in our team, we can do it. Up Gunner.

Won’t be surprised to see Coq in CB. I just hope he doesn’t make any rash tackles

I’d prefer Monreal to Gibbs in the LWB position. But if Mustafi is fit then he’d come in and this would be my team.

Though switching Ramsey for Coq could happen depending on how well we do in midfield.

How about a back-three of Holding, BFG and *drumroll* Coq?

6-8 weeks is between start and end of July. Saying 6-8 weeks and then immediately going on to say until AT LEAST the beginning of August is disrespecting basic arithmetic and the Roman calendar itself.

I think it’s dangerous to tinker with a formation now – particularly with the importance of the match. Assuming that Mustafi is unfit, I would go with:
Cech
Holding, Mertersacker, Monreal
Bellerin, Xhaka, Coquelin, Gibbs
Ozil, Alexis
Welbeck

I would normally go with Giroud up top, but with no Ox, there’ll be a dearth of decent crosses. The bench would be:
Ospina, Oxlade-Chamberlain, Ramsey, El Neny, Iwobi, Walcott, Giroud.

Given the fact we don’t know what is going to happen, Chelsea definitely don’t. And they say surprise is the best form of attack….
*clutching at straws*

While I do not expect to see them anywhere near Wembley, whatever happened to Mathieu Debuchy and Carl Jenkinson??
It goes to show how far down the pecking order they are when we are trying to work out how to put a defence together, and they do not even come into the discussion.

Praying for a win. I couldn’t bear a chelski double.

OX at LWB?!! Are people confusing him with Gibbs again?!

I won’t be surprised if the Ox, Gibbs, Monreal and Bellerin start. 50/50 chance I might just be elated if they start.

Haven’t Chambers and Bielik technically finished their loan spells now, if so we have tons of cover