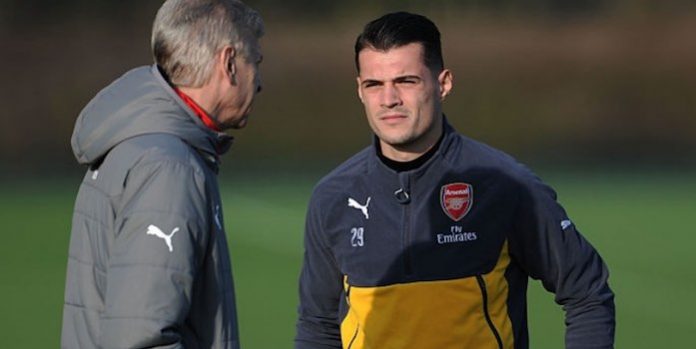 In his press conference on Thursday, Arsene Wenger first said that Granit Xhaka was ‘out’ of Sunday’s Premier League encounter with Manchester United.

Pressed a little later on, he said that the Swiss midfielder had a ‘little chance’ to be involved as he coped with a swollen ankle.

Now, it seems as if he’s very much in contention for tomorrow, taking part in training today ahead of tomorrow’s game.

It also looks like Shkodran Mustafi is up for selection again, returning after a few weeks out, and he could take the place of Gabriel who frustrated the Arsenal manager with his concession of a penalty at White Hart Lane.

Half a door; a kettle, three small boys under a big coat to look like a grown-up, Groot; Eight bananas, some dust, flower petals, cinnamon sticks; old shorts that have been left in a sports bag for too long, a flat tyre, Inanimate Carbon Rod.

Arsenal 0-1 Manchester City: By the numbers

Answers why we are a shambles without the ball

But it’s okay, express yourselves lads your natural talent will win out

Too Drunk To Be Offside
Reply to  Greg

I am quite excited about the game, especially after watching the Shite Fart Lane team burn on Friday night.

All this crap about powershift and blah blah and Sp*rs’ season is finished while Arsenal hv a cup final to look forward to and hopefully a trophy to celebrate at the end of it.

How do you or Ian Wright know he isn’t coached?

You don’t listen to the podcast then

Walcott as captain is a bit of a joke imo. He might be experienced and been longest serving memeber. But that means fuck all. A leader of men, setting an example with performance and attitude, managing a game tactically as the manager wants…he is not. Id have thought Cech, or Koscielny. Maybe this is a tell tale of what we miss as well as other things. Leaders.

Someone (a Manc) said to me last night that the worst thing that could happen to Arsenal is that we win the FA Cup. Obviously I snorted and told him to fuck right off. But in a way, he’s right. I, of course, want us to win this game and every game until the season but we do have to hit rock bottom for this board to stand up and recognise there’s a big problem. Winning a trophy will merely rose tint the season and give us another two years minimum of the same shite.

He probably meant that, if we do win Cup, we’re stuck with Europa League and a season of Thursday/Sunday matches. See what that does to teams and the number of extra games against unknown Eastern European clubs. Much better to hit 4th and get CL spot.

Ironic really, win silver, get shite,; win nothing, get CL.

Nah, we’ve already got Europa. He meant what I said.

Agreed, my mistake, I forgot Manure won EFL Cup and impact on Europa places. Can’t avoid Europa League now but comments on that stand – it will screw any hope of PL unless we get out early. Chelski did it properly last season!

Comment on the concept of winning FA Cup and getting Europa but finishing 2/3/4 and getting CL place still stand too.

How many Xhaka games before he came to us have you watched to been able to say that his flawless are down to the way he’s been coached at Arsenal? To play as a defensive midfielder in a possession team it’s one of the most difficult things to play at the top these days. Even players more capable and famous than Xhaka are not that good as a positional player in front of the defense. Kroos and Busquets for example, are better as pressing midfielders just like him, they’re not a Xabi Alonso type. Wenger played Arteta as a number… Read more »

I think Eight bananas should be captain for the day.

Three small boys under a big coat would be better IMO.. .at least they’d measure up to Viera

Inanimate Carbon Rod is out as he has a rust infection!

Hahahaha this was a good read 😀

Any news on Perez?

Yes, he won’t play because Arsene doesn’t really like him much.

Really? I thought he had a knock but I guess you know much more about it

Was injured but he returned to full training on 25th April.
Come on, keep up. It’s not that difficult to follow the latest news.

Timorous Me
Reply to  spinner

And then didn’t he pick up another knock in training?

Seems like he’s assimilated very well to the world of Arsenal, where you don’t know if somebody is out because of an old injury or a new one.

As usual, Arsene will put Ramsey in the team and all other players will depend on that.

I thought half a door was injured or am I getting my stories mixed up?

He is injured, used to be a whole door. Mettle.

So inanimate carbon rod is Giroud then? Fits him well.

I think we need to benefit from a solid defensive core. We have played with Granit-Coquelin start of season to good effect. Confidence is the issue at the moment which inhibits going forward with the possibility of leaking goals in the back of the player’s mind. That said, I think our offensive potential and pressure on the opponents has to be exerted from the wing backs. Wenger has not unleashed its full potential and been too timid. To me he needs to ensure a solid middle core. Koscielny with Granit or Mustafi on the right, the experienced Monreal or composed… Read more »

In recent games, Granit (with the back 3 system) has shown more enterprise and been pushing forward more making forays into the box.

In this case, maybe the discipline of Coquelin next to him will be a better benefit.

Blogs,you left Cash Reserves out of the starting line up…

Really the comparison is between having :

OR having Ramsey in which case Granit has to remain deeper (where Coq is in this set up) with the Welsh man joining Ozil higher.

And the “trophy” we playing for is top 6

Pair the Raccoon with Groot in midfield and any defeat will at least be entertaining.

Arsène is just a joke

Thanks for your insight Sam. Man U tomorrow…COYG.

Fans are doing the club a disservice. Not doing enough to force the Frenchman out.. He is the source of all our troubles

Absolute disgrace, what’s Cash Reserves got to do to get a game?!

Xhaka’s about the best midfielder we have available at the moment, not that that means much. He’s got a great range of passing when given time and space but against the better teams he’s looked slow and cumbersome trying to get the ball out of his feet to switch it quickly.

I’m hoping it’s a first season thing and he gets up to pace because our midfield is truly unconvincing at the moment.

Who on earth would give this comment a – ??? I thought that would be a good question for Arsecast Extra!

Why is Coquelin not groomed like Kante is at chelsea? When kante came in he was just a CDM who covers a lot of ground and takes away the ball from opponents and just passes sideways to someone more comfortable on the ball. Now, with every week he has got so many much better on the ball and fews times has the confidence to take darting runs like Yaya and provide those through balls. Why Coquelin is not getting any better? Why no one is critical of him to improve?

It’s because, to use an anology. My ford fiesta is car the same as a Ferrari is car but ultimately one is far superior to the other.
You can polish a turd but it will always be a turd.

You drive a Ford Fiesta?

Lol I like your analogy. Though I was hoping that someone might be seeing more potential in Coqs.

The Fiesta is superior on​ a trip to the supermarket.

Isn’t that what Wenger did start of the season?? And last I checked, Kante was a b2b midfielder, not a DM?

I have never understood. Who are you referring to when you say “Inanimate Carbon Rod?”

And in what context?

Why do people call Ramsey a goal scoring midfielder when he doesn’t score any goals?

So, Xhaka must be putting his hand up and saying to Wenger: