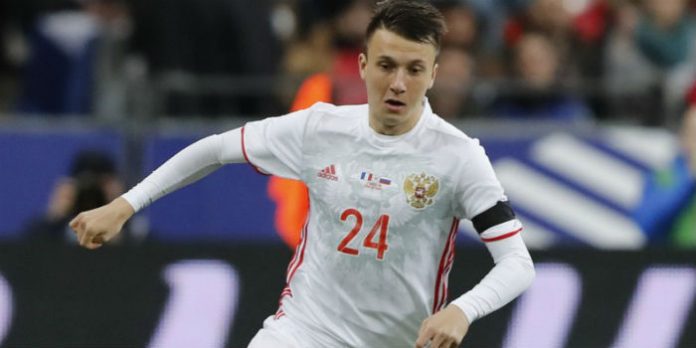 Over the weekend Arsenal were tipped to make a £10 million offer for CSKA Moscow’s 21-year-old midfielder Aleksandr Golovin.

That link has since been shot down by the Gunners’ scout in the region, Pavel Kucherov, who thinks the player isn’t ready for life in the Premier League.

In an interview with Sport Express, Kucherov, who has worked for Arsene Wenger since 2014, revealed that he’d not been asked to scout the player and that a move was unrealistic.

Here’s an extract of the interview, translated from the Russian by Reddit user @medved_

What have you heard about Golovin’s potential transfer to Arsenal?

This was a surprise for me. Usually, these things aren’t publicised and are kept private. It’s always nice when there is interest in a footballer from Russia, a country that does not have many players in Europe. This is especially the case when there is substance to this interest, but we won’t speak about the end destination.

What do you mean?

I mean that this player is not talented enough for European level and it’s unrealistic to discuss his transfer to a top EPL club.

You are not of a high opinion of him?

I didn’t say that, but to make it to a top Premier League club, Alexander would need to improve his football in general, as well as his physical, psychological and mental attributes. I don’t believe any former CSKA player has previously established themselves in a top English club and if Golovin wants to prove himself in England, he will have to do it step by step. Because of high competition, he would be getting little playing time to prove himself.

Andrey Arshavin managed it. How is Golovin different from the former national team captain?

Arshavin of those years was a footballer of a completely different level which Golovin has not yet reached. He is more talented than Golovin of today. At the moment, as I’ve previously said, the CSKA midfielder would not be able to make a difference at the top EPL clubs.

Is a transfer followed by a loan back to CSKA possible?

It’s the right strategy for a top club that wants to buy a player like and develop him. Only this approach will give the player a chance and prove himself in the EPL, although if Arsenal will decide to proceed with this transfer, I don’t think it would be the right move to keep the player in the Russian league. He would not be developing there in the same way he would in England or Germany and he definitely needs to move to a club of different level and pressure where he can take the next step towards making it at the club that is buying his transfer.

Who would Golovin compete with at Arsenal?

Alexis Sanchez who you just saw in yesterday’s Russia-Chile friendly. There are also very fast and strong English guys, so the competition is high. I think the issue is Golovin himself and his technical, tactical and most importantly physical abilities.

Have you been asked on your opinion of him at Arsenal?

No I have not.

You can read the rest of the translation, here.

Ben White: By the numbers

up or down vote for your extreme internet reaction :

thumbs up : this guy is terrible on FIFA and isn’t the £70 mil signing we need.

thumbs down : why cant arsenal ever get anything right ? we are a shambles.

if neither of the above apply , then “meh” works for me!

Why is this the fault of Arsenal ?

Not surprised. Knew this smelt of another Kokorin saga. We do need a CM, but it has to be one good enough to make the starting 11. Enough of getting squad options. A world class/close to world class CM and a world class CF is what this team needs. Need to get back into the ucl as soon as possible

We should go for Tolisso

Don’t know why people down voted you, that’s the kind of player we need! Don’t want to get carried away with comparisons but he’s the closest thing to what Patrick Viera was (in terms of his qualities, he’s still 23 and nowhere near the level of Viera).

yeah some people are born jerks…our russian scout seems like one!!

that must’ve hurt ! he stopped short of stating the poor guy has two left legs, one with a limp and the other without a toe… ruthless dream killer this scout.. I can sense the translator has been a bit kind of this one..

TBF it didn’t sound that cruel in Russian. The guy just said something like “he’s not good enough to be first choice for Arsenal at the moment, there is room for improvement”

Let’s try that one again:

In Soviet Russia, Football plays you!

No, the way to destroy a footballer’s dreams is to hype him up way above his actual ability, flog him to a club that don’t want or need him, leave him to rot on a bench or in the reserves and eventually let him leave on a free so he can go off and join a non-league side somewhere. There is nothing wrong with being a journeyman footballer in the lower leagues or some less competitive foreign leagues. The real shame is those footballers who are sold the dream of playing for Arsenal or some other top side despite never… Read more »

I don’t understand why this scout was so critical of him. Just say we’re not interested in him and that’s it. So harsh.

What’s the Russian for brutal?

But why would it destroy him? Or Golovin is not capable of realizing his own lvl and potential? To make to the top you must be tough enough to accept such things. Aaaand it can motivate in the end

I feel like the word “link” in the title was unnecessary.

From Russia with guff.

Ignore all the rubbish speculation. If you follow all the articles that come out on summer transfers you will waste a lot of time. Even on a site as good as this the two Golovin ones have come to nothing.

Relax. Enjoy the summer and come back to see what has happened in a month or two’s time.

Np. If you have the time to waste feel free. Reading lots of (mostly) made-up stuff is fine if you fancy it.

I’ll be enjoying myself.

If only it was that easy…

Even though in my heart I know we’ve got zero chance of landing the likes of Mbappe, there’s a small part of me that won’t give up hope.

Fucking trasnsfer window – gets me every summer.

Nah, many people love the speculation whether they turn out to be true or false.

I’d love them to have more rewarding things to do.

See you in two months then. Right, so where were we…?

I’m looking for valid Arsenal news and trying to help others.

I think he enjoys winding you up. 🙂

He’ll have to try harder to achieve that.

Dicking around on goal.com then eating a sandwich.

So you think its a ‘No’ then? Come on , say what you really mean.

I wouldn’t underestimate GGG
The guy is capable of smashing your eye orbital bone!

Not possible for a cska player to establish themselves at a pl club?
Ahmed musa has a pretty decent record with Leicester when he’s picked.

‘When he’s picked’. Fair to say he has not fully established himself.

Would you say the same for lucas perez?

If he isn’t fat and Croatian then we’re not interested.

Can’t think of too many Russian players that have made it in England, I am sure there are some that have had OK careers, but nobody that has been considered a “top” player recently.