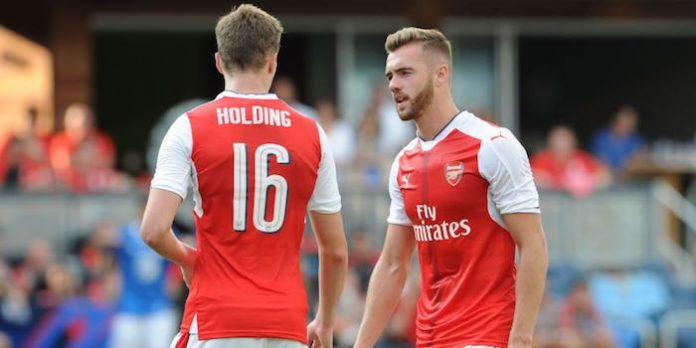 Calum Chambers and Rob Holding are currently on international duty with England at the European U21 Championships.

The Arsenal duo have had differing career trajectories, with Chambers spending last season on loan with Boro, while Holding was part of that epic FA Cup final win over Chelsea.

One of the great Arsenal centre-halves, Martin Keown, has talked up the former Bolton man’s impact and also believes there’s a future for his counterpart too.

Speaking at yesterday’s kit launch, he said of Holding, “I’ve been really impressed. He’s quietly understated and doesn’t get ruffled by anything. He’s very calm in possession and uses the ball well. He really benefits from being in a 3.

“When you’re a young central defender, it’s nice to have that extra player around you and his positioning is already very good in that formation.

“When you consider City paid upwards of £50m for Stones and Arsenal paid £2m for Holding, that’s another exceptional piece of business from Arsene Wenger.”

As for Chambers, Keown believes that retaining the three centre-half system leaves the door open for his return.

“If Arsenal play three centre halves that means there could be chances for him,” he said.

“I think he looks very suited to that system. Arsene tends to keep faith in younger players, the issue might be if other clubs come in for him, does the player want to hang around if he can start somewhere else?

“He’ll have watched the FA Cup success from afar and been a little envious, but we’ll have to see what ambitions he has now.

“He seems a very well balanced guy. There was a little debate as to whether he was a right-back or a centre-half. In a back 3, he might find that balance and Wenger might have a plan for him.”

Chambers and Partey call on Arsenal to heed Hammers lesson

Holding’s on for a hero.

And Chambers is only 22, so not close to his prime yet. Worth keeping hold of him if we can, especially as back 3 position would suit him.

Future would be Mustafi, Chambers and Holding though.

MERT!!! Holding or Must on the right, Mert down the middle, and Kos on the left with Monreal and Bellerin as WBs. Not to mention Sead…

Wow, we have a lot of defenders. Time to buy some forwards!

Agreed on Chambers. And he’s much more of centre back and than a right back in my opinion. I recall he had an excellent start as CB with us.

Could suit him very well on the right side of a back three.

He’s looking very good at the U21’s, best English defender so far, and for some reason Holding isn’t in the starting 11, would’ve liked to see how they did together

It is actually very encouraging thought that Chambers is Holding Rob on the bench, but I think this is mainly due to match fitness and games played this season both of Mawson and Chambers have played more games in the Premier League than Holding and both have been really good. We know how good Holding is but this fact is showing me how good Chambers might be.

It’s weird but from what ive seen guardiola do at city, I’m quite sure he’s overrated. All this analyzing, micromanaging everything and flashing handsigns from the bench for 90 minutes, seems to only work temporarily.

My point being he bought stones for 50 million.

Those are some expensive stones

He won with the best team ever to grace the grass, he could not win with the second best. A nice dog could do that with my gran as assistant and a violent cat as physio. I dont see the substance in the hype. I think he is extremely overrated. I think we will have to wait for next season though before being to judgy. He is no messiah though.

Keep both of them. Mertesacker will stay only one year and both of them are better than Gabriel. Although I think Wenger will use Montreal in a back three, Koscielny admited that he cant play 2 games per week. So, Gabriel should leave and make way for them.

I was a bit cool about Calum Chambers last season but now I find myself wanting him to stay. He had some good moments for Boro and is still so young. Gets the odd goal too.

Agreed. Moreover, he was their best player statistically…
https://www.whoscored.com/Teams/21/Show/England-Middlesbrough

Definitely keen to see both these guys stick around and develop into legends for both club and country.
I wonder, however, if we are to keep Gabriel and Mustafi happy, and bring Chambers back in if loaning Holding out for a year might be logical. Get him playing premier league every week. Particularly with Per proving that hes still more than capable cover. Of course with Europa league there would be opportunities.. if we stick with back 3.

I wasn’t sure on old Chambers, thought he looked unbalanced, a bit bulky for his own good, slow off the mark, BUT the loan spell has proved I was perhaps wrong, and happily so! Gabriel hasn’t really worked out, as much as he’s encouraging from time to time, he makes me nervous when he’s on the ball.

It would be brilliant if they both flourished next season. Bags of energy and enjoy a tackle.

Pre season would be a good time to play both either side of Kos.

Big Chambers fan. Its easily forgotten that boros collapse coincided with his injury. Think that he matured a lot and showed consistency over there. Hes got to be ahead of Gabriel for me. Leaves you with Kos, Mert, Mustafi, Chambers and Holding (plus Gabriel if he stays). I like those numbers.

I would like to see Gabriel be sold and Chambers to come in. Gabriel is a good player but I don’t see him as a long-term successor to Koscielny. The future is Holding and Chambers. The new Adams and Keown.

I actually think old boy mert could play a big part this season. In the middle of a back three, his positional play and height would be an asset to our team, and his lack of pace would be offset by pacier players either side of him.

Prefers to shoot with his right foot according to fifa. That could be wrong though

Right footed but he passes the ball comfortably with his left

I think Calum is made for that right sided cb position in a back 3..really hope we keep him and he can get lots of games in the cups and push for a PL starting place