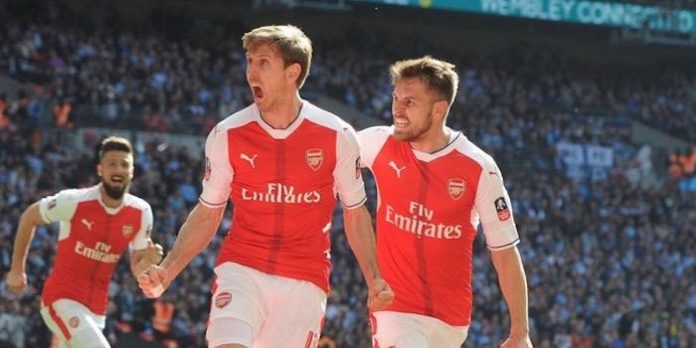 Nacho Monreal says he could stay at Arsenal until 2020 after revealing the club have an option to extend his current contract by an extra year.

The Spain international put pen-to-paper on a three-year extension in January 2016 says he’s happy at the club having consolidated his credentials as Arsene Wenger’s first choice left-back.

“I am very happy at Arsenal and I feel important because Wenger has shown me confidence,” Monreal told ABC.es.

Arsenal have got into the habit of inserting extension clauses in the contract of their veteran stars with Mikel Arteta, Tomas Rosicky, Santi Cazorla and Per Mertesacker all benefitting. Monreal will be 33 when his current deal is up.

As the player says, things can change quickly in football. No doubt much will depend on what happens next season with Bosnian international Sead Kolasinac tipped to challenge the Spaniard for a starting berth. The left-back is due to sign from Schalke on a free in the coming days; a move that could call time on Kieran Gibbs’ decade at the club.

Monreal also reflected on the season gone by, admitting that Arsenal’s failure to qualify for the Champions League was a disappointment.

“We had an irregular season, we did not meet the goal of being in the top four, but we made up for the [league] season with the victory in the FA Cup and we leave [for the summer] with good feelings,” he said.

“I have played most games, I have felt important and I have been well,” he concluded.

Arteta on Willian’s future: We are talking to his agent

What a fucking lad.

Monreal is the ultimate professional, No personal glory or fame, just goes down with business. Wish to see more of him the coming seasons. Reminds me of Lauren

Ahh he does indeed, very solid. Speaking of Lauren https://www.youtube.com/watch?v=P4CZgblO65o#t=02m54s

he’s been amazing for us. i think it was the fa cup when one of the commentators used a word that IMO encapsulates his performances for us – Responsible

I thought he brilliant against Chelsea in the FA Cup final. Monreal had Hazard in his back pocket, zipped up and taken to the dry cleaners with the following words on the tag WE FUCKED YOUR DOUBLE UP!

Bit confused by this with Kolasineac coming in. But Monreal has been consistently good for the best part of 3 seasons.

yeah, down with this “two good players for each position” nonsense!

Don’t forget Monreal was a better than capable CB in the 3-4-3 formation. Kolasinac would go to LWB

Yeah I agree with that….just thought Kolasineac would want 1st team football. Going to be a tough fight. I think in the 3 4 3 it will Kos Mustafi Holding…..Gabriel and Chambers as back up. Still got Mert too!

is there not sounds that gabriel might be moved on?

Worth it for his psychotic goal celebrations alone!

The new guy’s (yeah I cant spell his name) going to have his work cut out dislodging Nacho from LWB, but that’s what we want, real competition for all positions.

I just call him Sead. I’m one of those (blame me if u will) who still has to look up our tall polish keeper’s name’s spelling before typing his name. I guess it’s amazing how there’s so much diversity in clubs now apparent with the names. And it’s amazing cuz it shows how football is truly a global sport and clubs don’t have boundaries.

Isn’t it “Bendtner” rather than “Bendnter”?

I think you’re confusing me with someone else.

You must be the Greatest Astronaut the Ever Lived

So you really are GAEL Clichy.

Oh you must mean Walter Chesney

It’s Sinead something or another isn’t it

You can bring the best left back in the world and still this guy would find a way to bench him.

Ultimately I think with a 3 at the back system, having someone like nacho who can play both LWB and CB at that level is perfect. Even as Kolasinac comes in, means we have 2 competitive LWBS and cover at CB.

For that Wembley equalizer against Man City alone, I’d give him 4 more years! Get in there Nacho man

gnabry has not really set budesliga on fire…i believe in wenger !!!he wont do a pogba on us.

dude, he’s got like 10 goals and many assists in his debut season . the teams vying for his signature are bayern , dortmund etc. anyway you look at it he was a missed oppertunity.

The thing with Monreal is his versatality. Even if we are to sign a new player..he think he will still be in contention to play in the back three or in his usual position. What a classy player.

And by the way when are we going to announce the signing of Kolasinac?
Any announcement of a new player would be highly bored.. Just getting bit bored now that the season is over.

The transfer window in England and Scotland opens this Friday…. prolly waiting for that to officially announce Kolasinac’s signing.

Was of the opinion that free transfers could be announced sooner than that. ??

Monreal is really a gentleman and an excellent footballer.

A gentleman and a baller.

Like him as left side of back 3. Wenger tried to utilise him as a Cback some seasons past to no effect. I suspect he felt like Sagna, Monreal had the experience to fill in in an emergency IF necessary. With the back 3, Monreal allows the wing back to push forward and in turn this allows Alexis freedom to damage higher up. This was the case with the Ox as an inverted left wing back (something I mentioned Wenger should consider) and in the FA cup finals, it gave us more ability to press higher. That said, we should… Read more »

Not had a fantastic season on the whole tbh, struggled badly in the first half actually. But showed great quality in adapting to the 3-4-3 as a CB and a wing back. There are still flaws in his game (like his strange inability to stop crosses) which is why we’ve brought in Kolasinac, but he’s still a very good player

I think next season we’ll see Sead or Holding, Koscielny, Mustafi across the back three, with Monreal holding the left wing-back position next season. Just a hunch.