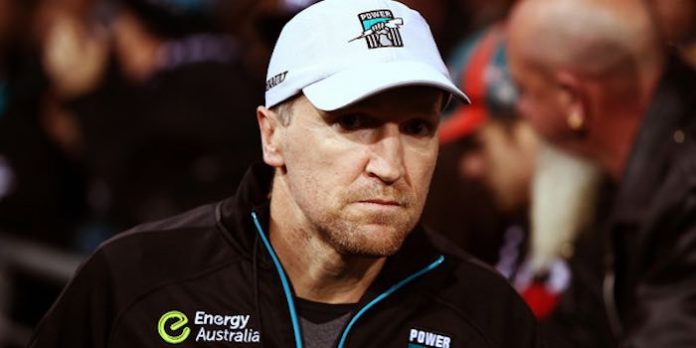 Various Australian media outlets are reporting that Darren Burgess, Head of High Performance at AFL side Port Adelaide, is about to join Arsenal.

With a Doctorate in movement analysis in Australian Football and Soccer, Burgess is a highly regarded high performance manager not only in Australia but internationally as well.

Burgess lectured at the Australian Catholic University in exercise science between 1997 and 2005 while working as an assistant fitness coach at Sydney, with the Australian Olympic soccer team as a video analyst in Athens, and then as the head fitness coach of the Paramatta Power in the National Soccer League.

He joined Port Adelaide following its 2004 premiership and would hone the fitness ability of the playing group as its head of high performance over three season, eventually helping the club to a second grand final in 2007.

Burgess then joined the Football Federation of Australia as the governing body’s head of sport science, and worked with the Socceroos during its 2010 World Cup campaign.

He then joined the world-famous Liverpool Football Club in the English Premier League as its head of fitness and conditioning for three season between 2010 and 2012, before rejoining Port Adelaide along with new senior coach Ken Hinkley in 2013.

Now, whether this is someone to come in and augment the fitness team, working alongside Shad ‘Shad’ Forsythe, or as a replacement for somebody else, we don’t know.

But [villain voice] it seems, at long last, as if the catalyst is changing Mr Bond.

Arteta: I like to see the players suffer for the cause

Fantastic off field appointment for Arsenal. Sad to see him leave my beloved PAFC, he’s made a world of difference since rejoining in 2014 but it’s certainly a great move for him

I’m an Indian, I watch some AFL on weekends and the fitness level of those players are insane ?

So you actually witness the fitness?

I’m not Indian. And I don’t watch AFL on weekends.

Harry the Heir
Reply to  Cuccu

You don’t know what the AFL is do you? It’s not the A League (which is a poor league) It’s a different sport all together and extraordinarily physically taxing. If we can introduce somewhere near AFL level physical performance we’d be dominant (at least in the pure physical sense)

I remember the days when we’d be bigger, stronger and faster than the opponents on top of technically better. Henry, Viera, Campbell etc.

Can he stop us losing players like Santi for ages whilst keeping our players strong and active on the pitch?

If so happy to see him join.

In terms of fitness requirements, AFL is one of the most demanding ball sports on the planet. Players rehab and recovery is on the cutting edge or sports science with D Burgess one of the true leaders and innovators. Arsenal have done well to nab him

Just line up our broken players and inject them with stem cells and Growth.
Then some Testosterone+Trenbolone, then give them 3 litres of the cheapest nastiest cider before kick off and unleash the rage.
We’ve too many “nice’ players, angry drunk roiders are the way forward.

At first I read Toblerone =p

hmm is he the new fabled director of football?

If he is he’s hugely unqualified and way out his depth. So possibly…

Sanogo has already left. What’s the point? Harrumph. The horse has bolted.

Must be holding on to Wilshire!

Oh Mr Supervillan, can you put slicing Mr Bond in half on hold and get us that to top quality super striker that makes all the lesser villains look, well dminuitive. Pleeeeze? 🙂

Fox in the Director\'s Box

One thing’s for sure… It’s impossible for him to be more unsuccessful than those who’ve held the position before him!

that fitness role is so suited for alexis after his retirement?

I’m a Port Adelaide fan and the team’s fitness is outstanding, perhaps their distinguishing asset. Burgess has put a lot of work in since he came into the fold. One of their hallmarks in this Hinkley era is the team’s fitness and being a ‘four quarter’ team with the ability to see out a match fitness-wise for its full length and out/overrun lesser sides in the final quarter of a match, often providing a decisive advantage, even in display last night as we overcame Brisbane Lions in a game that was tight up until about midway through the third quarter… Read more »

The specialism in endurance / conditioning would indicate an addition to Shad Forsyth as his primary focus (ttbomk) seemed to be injury prevention.

Port Adelaide had a fantastic year when Burgess first joined them in 2014, falling agonisingly short of a Grand Final. Their game style was based around hard running and incredibly high levels of fitness. From memory they didn’t have many soft tissue injuries that season.

They’ve struggled a bit since then (although they’ve improved this year), but hard running and fitness levels have remained part of their game.

He’s held up as the gold standard of fitness trainers in the AFL. Revolutionised Port Adelaide into a hard running high pressure team that is now bench mark or othe teams in AFL. The body type and physical demands of AFL players is however very different to football. The average for players is to cover 15kms per game in bursts with plenty of rotation on and off the field. Maximum of 26 matches a season, teams complain about only 5-6 day break between games. How his skill set translates to football is anyone’s guess really.

This isn’t awesome. I’m a big fan of Darren and met him when he was at Liverpool some 10 years back. Even managed to poach one of his data scientists from Port Adelaide to our company. Getting Darren is a serious intent. If he comes in, then make no mistake, he’ll be coming in as a Director of Performance or Head of Performance. His role would be above Shads and all others. I imagine Shads is in essence the Head of S&C at Arsenal with a different moniker (basically he’s responsible for the strength program at the club). Darren would… Read more »

I meant this is awesome. Stupid phone.

Should we also get Jeff from Athlean X?

It’s nice hearing all the positive form Port Adelaide, I really hope he can condition the team to be super fit. I hate saying this, but being super fit is the main reason Spurs have improved so much, they don’t stop fucking running, especially when they don’t have the ball. I believe we’d be far superior to them with the same amount and tempo of hard, fast pressing. However, I’m not sure what evidence e there is with his success in proper football. At Liverpool, he was there when Roy Hodgson and Dalglish were there and I didn’t notice any… Read more »

Hank Scorpio
Reply to  Me So Hornsey

Perhaps that was because they had mediocre players & Roy wasn’t the best & the game had passed Dalglish by. Port Adelaide are a good but not excellent AFL team with respect to talent whereas Arsenal have as much talent as most others but are seemingly behind our rivals when it comes to fitness possibly due to outdated training methods. Hopefully this appointment helps maintain the required level of physical intensity.

As an aussie league fan i hate the implications of this appointment. AFL fans are already insufferable about how their game is better, players are fitter etc, this will just give them more ammo.

Why can’t we all just get along? Why does there have to be a code war? Whose fitter, more skilful, tougher etc.

I love football (mostly just Arsenal to be honest), rugby league and AFL.

If he is able to make our players transform into some kind of hybrid beings or super-hybrid cyborgs, or some sort of flesh-coated machines like Voltrons in man flesh, and make them play on match days without anyone finding them out, you know, let in a goal or two so that it doesn’t look suspicious, then he is more than welcome. Else, need I say it’s needless?

Isn’t stroking a cat for Dr. Evil from the Austin Powers movie franchise?

The local Adelaide paper ran this as the main backpage story today saying a deal is expected to be done in the next 2 days.

Darren is out of contract in October and The Arsenal want him now so a deal needs to be done.

He was also apparently featured at the world sporting congress at the Nou Camp last month.

AFC should just do what it takes if they can, really. It’s easy to be cynical about the club (AFC) right now, but this is a significant and top, top quality appointment in my opinion so hats off to them.