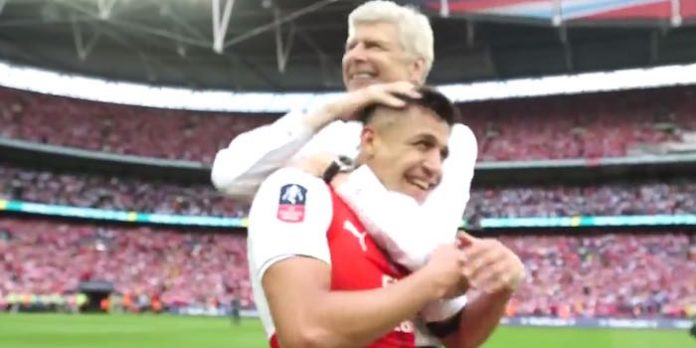 Alexis Sanchez won’t return to Arsenal until Tuesday as he is, according to Arsene Wenger, suffering from flu.

The manager said he’d received a text from Chilean, and his expected Sunday arrival has now been put back a couple of days.

The 28 year old posted a picture on Instagram the other day to say that he was sick, and Wenger was asked about in the press conference following today’s 5-2 win over Benfica.

Arsene Wenger says Alexis is now due to come back on Tuesday. There is "no development – he is staying, of course".

Pressed on the matter by journalists, the manager continued, “Your job is to be suspicious and my job is based on trust”.

This will, of course, lead to more speculation, but once again the club’s position has been consistent, insisting that Alexis will not be sold.

Let’s hope this isn’t the start of shenanigans from Sanchez’s side though.

It’s shenanigans. Right in line with the modern footballer

Tuesday will stretch to end of next week or the following Tuesday.

Maybe he’s dogs will also be sick and he will have to delay the return further.

Except alexis is not your typical modern footballer. He comes from extreme poverty and shows how grateful he is to play football for a living, by giving his absolute all in every match and training session, by all reports. Even on holiday he still seems to train hard.

If he is agitating for a move then I stand corrected by imo alexis has more integrity then 99% of footballers out there. I hope he proves me correct.

I think it’s a mistake to assume that Alexis has more “integrity” than other footballers because he gives his all on the pitch. That’s just down to him having a ridiculously competitive nature – we love him for it, but that doesn’t mean he loves Arsenal particularly or will stay loyal.

We will find out what hes really like soon enough – hopefully he’ll stay respectful and committed and not try to force a move in the rest of the transfer window.

You say it’s because he has a ridiculously competitive nature, but that’s not the reason he gives in interviews. It’s more to do with being an example to young kids in the position he grew up in. That is integrity and he hope his actions follow his words.

I don’t assume he loves arsenal, why should he? But he hope he respect the club and the contract he signed

I will have no grudge if he moves on and go to another club. He is a player who came here as a star (i.e not someone who we developed) and performed well every single year. Its our failure as a club if we cant keep hold of a player like him.
Regarding loyalty, it goes both ways, if Alexis is an underperforming player, Arsenal would be trying hard to move him. Look at Gibs, he has been very loyal, but the club is forcing a move by leaving out of pre-season friendlies and asking him to train alone.

Well said man. He is an uber competitive guy, no doubt he is disappointed arsenal didn’t make the champs league. We should be questioning the guys that aren’t disappointed with that. He has not said one word publically against arsenal and never once on the pitch have you not seen him give his all. He leaves every ounce out there. And here once again we have all and sundry turning against him, the exact same people that have defended Jack Wilshere blaming everything on injuries despite him acting like a twat of the pitch, not being up for a challenge.… Read more »

I like Sanchez but he is not the best we have ever had and lost. But I believe (probably wrongly) he was responsible for our worst period in the season. But I won’t blame him for wanting more money away from Arsenal if there is anyone willing to offer. I don’t mind Aguero in exchange plus some 20M.

Alexis has so much more integrity than 99% of footballers that he evades taxes. He works hard on the pitch because he loves football. Mike Tyson also used to be a machine in the ring.

Is that the Dublin shenanigans

Serious question: what’s the difference between shenanigans and tomfoolery?

hey farva, what’s the name of that restaurant you like with the goofy shit on the walls and mozzarella sticks?

Too much maple syrup. They’re ansty in the pansty.

He’s not coming back, is he?

So far, there is no reason, literally none, to be suspicious. Can we not wait until Tuesday? Two days?

Phoned in sick by text, that old chestnut.

My manager in IT used to tell me off for that, that’s all.

I tried calling in sick with an inflamed groin the other day. Didn’t work.

I even sent a picture.

Good way to get sacked

My manager said, ‘what a load of bollocks’.

He should take another day and go back Wednesday, much more believable if you do the two day trick.

I read “inflated” first time… Not sure what’s worse!

Called in sick by text, that old chestnut.

Went to drive around the Citeh.

Sorry repeating myself, too much to drink again.

Using drinking as your excuse?
That old chestnut.

Usually the reason, the excuse takes time usually on a Monday whilst panicking a bit.

He may be ill. Coming back a few days late and you say sell our best player ?

Gets the benefit of the doubt from me, your innocent until proven guilty, no proof he’s not ill.

Precisely, and he just came back on a long haul flight from a warm climate to miserable grey and wet London. I often get ill after flights.

Bro, he’s in chile with that actress..

The thing is that Chile right now is experiencing its Winter and he just came back from the heat (russia)…so it may be the case that he’s really sick!

Borrowed any old Labrador to make it look real then hit send.

And a flu prevents from taking a plane?

Yes it does if he has it? I always say you really have “flu” if you wouldn’t get out of bed to pick up a twenty pound note.

There’s a joke about Scottish people waiting to happen here.

probably stops you taking selfies as well no?

Have you not seen Dawn of the Planet of the Apes? That so called flu can whipe out mankind.

Trust it to be Sanchez to bring the fall of man, and the rise of the John Terrys

No reason at all. Other than his angling for a move over the last six months.

Is he sick, though? I think that’s what all the fuss is about.

yes, because he went through the trouble of tweeting about it.

If he was trying to send a message he’d just call the manager and say he feels ill.

because he went through the trouble of tweeting about it

That sounds like all the proof I’ll ever need! Cheers!

Btw, you’ll soon get a tweet from me about a bridge for sale.

Trying this on Monday. Post a pic on instagram with some cough syrup in the background and sending in a text to the Manager. Who knows, I might get a pay raise and still leave next year anyway.

Don’t forget a Labrador. Everyone loves dogs, wack one of those in for the sympathy vote. Then party likes it’s a bank holiday.

Enquire about Dembélé, if he’s available for anything less than 85mil, sell Alexis and get him!

For 85mil, i hope you mean all the Demélés..

I have watched him a lot over the second half of the last season, haven’t seen anyone of that age play that well except Messi.
I prefer him to Mbappe, but that could be just me.

A different George
Reply to  Gooner4722

Except Messi! I guess that takes care of the teen-aged Cesc as well as Mbappe. And one or two others.

If Neymar goes to City they may have to sell to balance the books.

Hope we can get say Draxler or maybe Rabiot. Exchange.

If Neymar doesn’t maybe they might consider a move for Alexis again.

Alexis has his own fight with his agent apparently. Agent wants him to stay at Arsenal and see out contract, he wants City.

Compromise, PSG. Depends on the French club, they certainly have enough to accomodate Alexis on wages but have been distracted by Neymar.

What we need to put our foot down on is no transfer to City. Narrow Alexi’s options.

“Pressed on the matter by journalists, the manager continued, “Your job is to be suspicious and my job is based on trust”
Hmm. Quite an enviable task to decide whether I distrust the suspicions of journalists more than I trust anything that comes out of Wengers mouth.
Honestly haven’t a clue where Alexis will be at end of transfer window.

Honestly doubt he wants to come back.. I think the ig post was to spark speculation and throw Arsene off balance.. But mans spent some time in Japan, can’t be rattled easy.. Did you see alexis facial expression.. Players try to be upbeat when posting news of ill-health with thumbs up and stuff, but this guy had a sad face, like “see my face, it’s sad, so im really sick”.. Why did he wait till Arsene gave sunday as his resumption date to ring up the post.. Manz wants out!! I say sell him and the other deadwoods, add some… Read more »

You think we can sign neymar! God bless you, you are truly special x

I think Mesut would agree with me, better to get the flu out the way before the season starts

If my staff are sick I ask them call me personally and I do the same if I am unwell. Certainly a text is not acceptable imo.

Particularly one with a picture of your crotch attached to it

Absolutely spot on. Especially when if know the media will be all over it and put Arsene under pressure. Sorry but in my mind Alexis should have had the decency to speak to Arsene rather than text and Instagram.

that picture makes me sad.

Wow! So there’s no doctor at London Colney. Please if he doesn’t want to stay, sell him off to PSG. We don’t need disgruntled players no matter how world class they are.

I can sink the battleship in two shots no fucking problem.

A football agent tried to manage my situation once. I ate his liver with fava beans and a nice Chianti

We can sign Kondogbia to replace him if we need to, Shown he has an eye for goal (excuse the website…)
http://metro.co.uk/2017/07/29/geoffrey-kondogbia-scores-greatest-own-goal-of-all-time-for-inter-milan-against-chelsea-6815189/

Seriously though, he doesn’t seem to be having a great time of it at Inter and he’s shown he’s got all the ingredients to be a top class midfielder at Monaco. Would it be worth a punt?

Seeing abs his stock won’t have increased, and he’s shown the ability and talent to be a top player, it would be worth a punt

Seriously blogs, Of course it’s the start of shenanigans.
Bored of this constant posturing crap. If citeh offer £60M sell the baby. If PSG offer £50M, sell the baby. I’ll miss his goals but not his on-field strops.