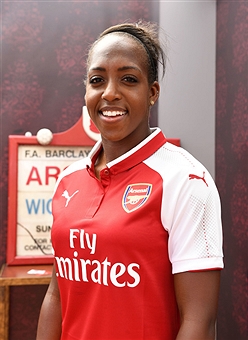 Arsenal Ladies are on hiatus until the new league season starts in September. There is the small matter of Euro 2017 in Holland, which gets underway in just under a fortnight. Danielle Carter did not make the England cut, somewhat surprisingly. But she is refusing to dwell on disappointment, she tells Tim Stillman that the hard work continues for her ahead of next season.

Dan Carter can be rightly disappointed to have been omitted from England’s Euro 2017 squad, but she refuses to be downhearted as the national side prepare for the tournament in the Netherlands. Channel 4 will be broadcasting the Euros, which get underway on July 16th.

Carter’s Arsenal teammate Heather O’Reilly features as a pundit for the channel and Carter confirms that she will certainly be tuning in, “When I get the opportunity to watch, I will watch. I want to support the girls still. I want them to do really well. I might be away for some of it, but I will definitely be keeping my eye out.”

With 4 goals and 4 assists in 7 games in the Spring Series, Carter certainly caught the eye during the competition- a one off round robin tournament as the top flight in women’s football reverts back to a winter calendar next season. “I finished with very good stats, so I was very pleased with how I played in the Spring Series. I scored a few goals and made some assists too, which a player in my position needs to be doing.”

The Gunners finished 3rd in the Spring Series, just a point behind Manchester City and winners Chelsea, but did so without losing a game- despite facing both Chelsea and City away, “We didn’t finish where we wanted to finish,” Carter reflects. “But we learned some lessons from the games we played in, we blooded some young players and finished the season unbeaten. So it’s onwards and upwards for next year.”

But the 24-year old has not been putting her feet up since the season ended a month ago, “I’ve been training still since we finished the Spring Series,” she explains, before breaking out into a broad smile, “But I have two weeks off for vacation coming up, to get away from it all a bit and get some much needed R & R!”

Carter came into the Arsenal first team as a 17 year old, but her improvement in the last 2 years or so has been particularly impressive. I ask Dan if there are any specific areas that she plans to work on in the off season and her answer is typically emphatic. “Everything!

“Nothing specific really, I want to just keep on doing what I have been doing. That means staying sharp, staying quick and agile- because so much of my game is based on that and to keep competing. Everything else will come together if I keep doing that.”

The Gunners have added to their attacking arsenal during the window with the signings of Scottish forward Lisa Evans and Dutch striker Vivianne Miedema from Frauen-Bundesliga champions Bayern Munich. Carter is particularly excited to see Miedema in action. “She is a very, very bright young player.

“She’s proven herself with Bayern Munich and the Dutch national team and she is still only 20 years old. It will be very interesting to see how she fits in with the girls, but we already have 3 Dutch players in the squad to help her settle. It’s a really exciting signing and we’re looking forward to seeing how she progresses in England.”

With 8 years now at Arsenal, Carter is becoming something of a veteran at the club and the Romford born forward admits that her association could have been even longer if Vic Akers had gotten his way. “Vic Akers approached me a few years before I eventually joined.

“He wanted me at the Arsenal Centre of Excellence, but my mum couldn’t take me there every week, so I stayed at Leyton Orient, nearer where I lived. Eventually I moved across to the Arsenal Reserves when I was 16 years old.

As Arsenal Ladies approach their 30th anniversary season, Carter recalls the feeling of signing for the foremost team in English women’s football. “Arsenal were the dominant force in women’s football back then, it was a huge honour to sign for them. I’ve been here for 8 years as it stands and it’s still so amazing. Arsenal Ladies is all I know.”

Let’s hope it stays that way for a few more years yet.

Tim spoke to Dan at the launch of the new Arsenal home shirt, which you can buy here.

‘We were a team full of competitors.’ Arseblog Exclusive with Arsenal Ladies legend Jayne Ludlow

Great piece. Tremendous player. Unbelievable that she hasn’t made the England squad.

Don’t let her contract run to the last year :S

Looks like Arsenal Ladies will have a great team next season. Thanks for keeping us updated!

Also – wouldn’t it be nice if Arsenal.com/Arsenaldirect made a dropdown menu with the women’s names and numbers for us who wants to order the Ladies home shirt?

She is far from being a “luxury player”, and it really makes you wonder how someone of her caliber can be omitted from the England women’s squad for the forthcoming European championships.

I suspect that if she were eligible, France, Germany, Brazil & the USA would love to have a player of her quality in their respective squads.