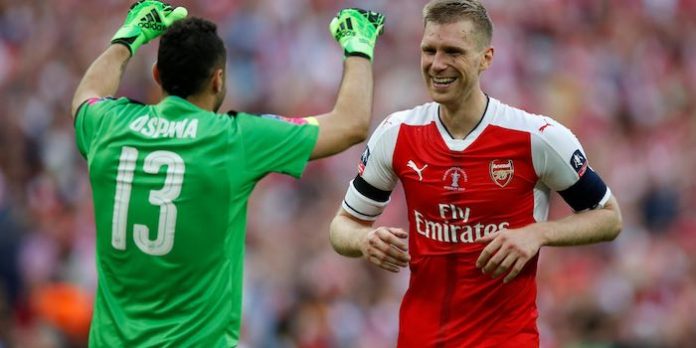 Despite much speculation about his future at the club, David Ospina is set to stay at Arsenal for the season ahead.

The Colombian international has been linked with moves away almost every summer since he joined the club, and during this off-season was heavily tipped to make a move to Fenerbahce, while a return to Ligue 1 with Nantes was mooted.

However, the reluctance of the Turkish side to bid anything close to what he’s worth saw Arsenal pull the plug on any potential transfer, and since then the 28 year old has been on tour with the club in Australia and China, and he played in yesterday’s 5-2 win over Benfica in the Emirates Cup.

While other players like Carl Jenkinson, Mathieu Debuchy, Kieran Gibbs and Lucas Perez have been omitted completely, Ospina has been very much a part of the preparations for the upcoming campaign, and Arseblog News understands that he’s happy to stay in North London.

It’s likely that he will remain the cup keeper, playing in the Europa League and FA Cup, while Petr Cech will be first choice for the Premier League.

So, unless another opportunity presents itself – along with a substantial bid – the former Nice man will be an Arsenal player next season.

It might also mean that third choice Emi Martinez could depart on loan, as he really needs to play at this point of his career.

Summerlul round-up – Bielik is king of Poland, Nelson out

I don’t mind Ospina but his height is a huge disadvantage for a keeper.

Would have loved Szcz being back-up to Cech.

Why thumbs down. Szczesny is a class above the average Ospina.terrible mistake in letting him go.

I always thought Ospina was short, until I looked up his height

6 foot is short for a keeper. I can’t remember an Arsenal keeper as short in recent times.

Good news. A very solid back up to have…

Yep more than happy to keep him

Nothing solid about him. We will rue the day we let our best keeper leave.

His decision making is suspect and he lacks the height and presence that all great keepers have. He is a good shot stopper but in all other areas is not good enough. Szczesny is a class above him as proved at Roma and it was a disastrous mistake to let him go.

And isn’t a wee bit crazy, as a former Roma keeper remarked.

So this season Cech in the league?
Ospina Europa?
Martinez Domestic cups?
Can understand why we do this, but I wish in the biggest games we’d just pick either our best or most In-Form GK

Actually met him once in McDonald’s, buying a big mac for his pregnant wife. He let kids take selfies with him and did genuinely seem a nice guy, seemed kind of shy actually

Down under
Reply to  Daniel

Did he drop he’s Big Mac

GraeB
Reply to  Down under

No more than you dropped predictive text!

Whilst Ospina has his upsides and is an international keeper, I feel for Emi Martinez.

He got a taste of action for a few games last season and did very well, plus in pre-season he showed his chops for penalties. He’s always professional and positive and it looked like he’d be the deputy this season. I was hoping this would be his chance to kick on for his development.

They might all improve in every department with Lehman. COYG ?

Best move for all concerned especially with szczesny gone..

Trouble is he’s not a great keeper. Decision making leaves a lot to be desired.

Kwame Ampadu Down
Reply to  Bri

If he’s a great keeper & he’s available for a decent fee at a great age for a goalkeeper then why aren’t clubs bigger than Nantes in for him? Those who think Ospina is no more than average are in the minority on here, but those in the know in the football world clearly agree with us.

He’s a capable number 2, the problem is this odd ‘job share’ thing that Wenger does to keep both keepers happy. I think there should be a clear number 1 (Cech), and for what it’s worth I think Szcz should have been kept to battle for no.1 spot.

“Good news everyone…” (said in the voice of Professor Hubert J. Farnsworth)

…& I actually agree. Happy to keep him 🙂

Alright, this one won’t be popular, but – I’ve got my doubts about Ospina’s qualities, even as a back up. His height is simply too limiting and he hasn’t got enough tenacity to make up for it. Every time there’s a cross in the box and he has to go into a clash with a physical striker, it seems to be a problem. And I feel like he solves this problem by relying on the ref too much – meaning he goes down, loses the challenge, goes through the whole “micro-injury” thing we see way too many often – and… Read more »

You confirm my beliefs. Just cannot understand why so many thumbs down

It’s because people like to Live in a world of fake illusions instead of reality.

A different George
Reply to  Martin

It’s an article on Ospina. Seems like the perfect place.

Makes sense to me. Also to keep both keepers happy and match sharp. If one is injured the other is ready. Both are quality.

This exactly. You have to rotate keepers if you have two real first-teamers, or your backup doesn’t get any game-time, and your performance takes a huge hit in the case of a GK injury, at least for a few games. The only other option is blocking your academy keepers in the U23’s, because you never need to rotate keepers to preserve fitness like you do with outfield players. And you want two real first-teamers if you have ambitions, and with European and cup games there’s more than enough game time to go around for 2 top keepers. Ospina is about… Read more »

If Cech gets injured, the thoughts of Ospina playing every week for a considerable period terrifies me to be honest.

Great shot stopper, thoroughly likeable guy, but not good enough at organising his defence at the very top level. Should serve us well on Thursday nights though.

De Gea is not an organizer either, yet I read nothing but praise for him.

Happy if he stays, solid starter or backup for any team!

Great news – if only for “OoooooosPINA!”

This is good news

Good! He’s the best back up in the league and he will get a lot of games when we play on spursdays.

Emi is a talent but he needs a lot of competitive games in a tough league like the championship or even league one.

This is for the best. Maybe not for Ospina but it certainly is for Arsenal.

Statistically he is the best keeper in the premiership

Kwame Ampadu Down
Reply to  andy

If ever there was proof that relying on statistics alone is a dangerous thing to do then this is it.

Probably why we weren’t too bothered to quibble over Szsc.

How much did Szsc cost us when we signed him?

Opsina is decent back up to Cech and has less unknowns than if we tried to bring Szsc back into the set up. Martinez looks a decent enough prospect coming up the ranks.

Ospina is a seriously mixed bag. Incredible reflexes, really fast off his line. However the speed at which he dives and diving in general, plus his handling leaves so much to be desired and his height is a big problem. Hence why he seems to have really good games and then really bad ones depending on the kind of chances he’s faced with. Appears to be an unpopular opinion but I really don’t think he can be relied upon game in game out and Martinez shouldnt have his development stunted in this way as he looks like the real deal… Read more »