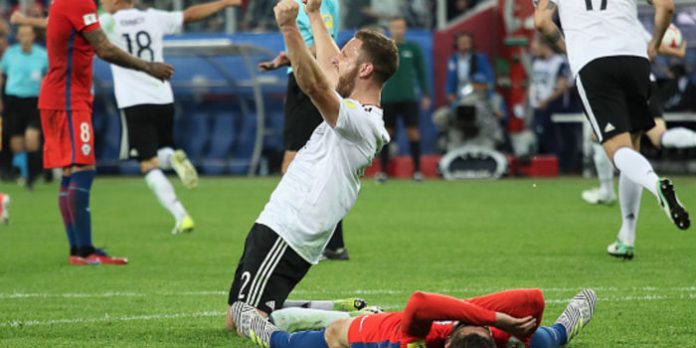 Borussia Moenchengladbach’s Lars Stindl grabbed the only goal of the game for the reigning world champions after 20 minutes following awful defending by their South American opponents.

Alexis forced a decent save from Ter Stegen with a free-kick but Chile, despite creating a host of chances, couldn’t find an equaliser.

La Roja should have been down to ten men when Gonzalo Jara poleaxed Timo Werner with his forearm, but despite a referral to the video assistant referee he was farcically only given a yellow. It’s not been a good tournament for the VAR process.

The German victory means they return to the top of FIFA’s ranking and comes just days after their under-21 side beat Spain in the final of the European Championships. Given Joachim Loew selected an experimental squad for Russia it highlights just how much strength in depth they have.

So congratulations to Mustafi, commiserations to Alexis Sanchez. Both men will now get an extended break, whether we see the latter in an Arsenal shirt remains to be seen.

Mustafi played really well. Sanchez, not so much. Draxler and Goretzka look the real deal.

I know hindsight is 20:20 but we really should have signed Draxler. Ah well, put him on the Griezmann, Ronaldo, Drogba pile…

Draxler looks fantastic. I wish wenger would throw Alexis at PSG in exchange for the German (He did not feature as much last season)

how did the chilean player did not get red for elbowing even after referral ?..I think they will give red only for murdering the player…absolutely horrendous decision even after video referring…and vidal sucks as a human being….

100% red for me especially upon review.

Agree. Should have been a red with VAR. Ref was extremely lenient to say the least

And yes, doesn’t make sense (most of the time) the way people tend to think.

Lacazette demonstrably consistent with over 20 goals for last 4 seasons. Secon highest tally last season, at 26yrs coming into this best years. I would dare say forget Lemar, Lacazette is a better deal than paying double for Mbappe over one good season only.

Most people tend to be swept up by hype alas.

No way
Reply to  goongot

TweakinGooner
Reply to  No way

So? I’d rather have the guy who’s entering his peak now and is banging in goals.

Lemar is a midfielder, Lacazette a striker. Not a fair comparison.

“..I think they will give red only for murdering the player”

That and if you’re Xhaka 😐

He was about to get away with it without any card, so at least that’s a step up from something…

But that should have been a red. You can clearly see that he’s sticking his elbow out to catch the German player with it.

AND we can replace him.

IF we should sign BOTH Lacazette and Mahrez, I’m not worried.

Many times last season, Alexis tended to over elaborate. He did not trust his teammates enough and tried to take everything on on his own. Many times, he gave away possession cheaply although to the Chilean’s big credit, he often tries to hunt the ball back.

But with say Mahrez, we can replace Alexis’s creativity/unpredictability/technicality

Am I the only one who thinks Vidal is a proper twat basket? Spends the whole last 2-3 months publicly tapping up Sanchez before Bayern pull the plug, and then claims that winning the confed cup (which nobody cares about) makes Chile the best team in the world (before losing to Germany). Just to put his logic into perspective, I live in Berlin above a giant sports bar. When the u21 won the euros, the place was going mental. Tonight…silence. Nobody cares. Fuck off Vidal you mohawk c**T.

Kreuzberg resident here. My neighbours were losing their shit after that final. Made me realise how much they love the game here, and how much the national team and its future means.

Prenzlauer Berg resident here…that probably explains everything;) Vidal is still a twat though.

Hello from Neukölln. Had the same experience, way more visible with u21s, although could be because Sunday night

No way
Reply to  Jdog

No noise down here in the south after either win

F’hain resident here: The german side is indeed BIG in Berlin 😉 And Vidal is talented twat of a footballer whose temperament seriously tampers his aforementioned talent.

On a different note, would any of the Berlin-based Gooners here be interested in a get-together for the start of the season?

Also, compare the media coverage of those two finals in Germany with the brilliant U20 World Cup win by England the other week (or their semi-final appearance at the U21s last week). Did anyone even take notice? Both finals were on prime time terrestrial TV in Germany and were front-page news the next day.

If the media in the UK would spend half the time they dedicate to bashing the England team after some failure on reporting genuine achievements at youth level, maybe the players wouldn’t be so traumatised when they pull on the shirt…

Yep, the whole “best team in the world” thing was very silly. Even if Chile had won… surely Vidal of all people must have realised how all those giant German Bayern players he trains with every day were conspicuously absent?

The entire team at the start of the game had… what was it, 185 or so caps (so 17 on average), half of them look barely old enough to shave, and Julian bloody Draxler was the captain!

A different George
Reply to  Eva

Well, although I don’t disagree about Vidal as a person, after watching him play in Russia, he really looks like the best box-to-box midfielder in the world. Tremendous motor, pace, brilliant passing, reads the game, great tackler, covers every blade of grass.

For a bloke named after one of the foremost hairdressers of all time you’d think he’d at least have a decent haircut.

I knew there was something about him that I coudn’t quite put my finger on. Well spotted 🙂

Glad the Germany B team beat chile, the cheats, rock and roll

We had every opportunity to sign Draxler before he went to PSG but once again wouldn’t stump up the cash.
Shame, we could have afforded with all the maybes who didn’t work out

IIRC, we were interested when he was at Schalke. Then he had an injury hit season or two, hopped clubs before finally landing up at PSG. There is a risk in signing an injury prone player for premier league. I guess we simply thought that the risks outweighed potential benefits.

Why do so many o; the. Chileans have neck tattoos? Is it a major trend there? Hope we have some Chiliean fans who can answer

Culture of gangs. Do you think Alexis will leave his country for one with a winning mentality now?

not Chilean, but definetly a sign of gang since its placement on the neck is always visible to others. but for some of thos eplayers is just to look tough

I thought that France currently have serious strength in depth, but Germany’s is clearly even greater.

There is no doubt room for improvement with the VAR process, but from what I saw over the tournament, many of the improvements to be made concern the quality of the decisions made by the actual referees, rather than VAR itself.

France have Lloris though.

Nachos in Montreal
Reply to  TweakinGooner

…what does that have to do with VAR?

TweakinGooner
Reply to  Nachos in Montreal

It’s in response to them having serious strength in depth. When they have a Spurs keeper who gifts their WC qualifying group lead away to Sweden in the last minute of additional time… they don’t have strength in depth. Especially when they might not even qualify.

Mustafi has been an excellent signing.

If we remember the host of reds, penalties conceded and own goals in Koscielny’s first season with us, it put things into better context.

As for Alexis, if he should ship out, IF we get BOTH Lacazette and Mahrez, I have no issue. Replaceable.

Alexis can finally come back to London and see his final 12 months through (the best worst case scenario). Anything but is unacceptable! (Unless he signs da ting)

Personally after the last couple of days I think Alexis is gone so today was the first day I pulled against him and his Chilean team and cheered for Mustafi. I felt kinda dirty afterwards and needed a shower.

Don’t feel dirty. If he pushes for a move to City & acts petulant he should henceforth become known as Dirty Sanchez.

There has been so much negativity surrounding AS remaining and AW’s contract, that if it was announced that AS was staying, AW would go from having very little support and confidence amongst the fanbase to virtually walking on water (despite the fact that he announced last year he could’ve bought LeMan and Kante for a fiver). Uniting the fan base for the new season has to be worth it, right?

Was the ref’s call, the video assistant provided the correct footage.

Both teams really played like the game meant a lot. Look at the German team right after the final whistle. It looks like they’ve won the actual World Cup. That was fun to watch.

(And before anyone gets on a rant about it “not being a real tournament” – the players obviously take it seriously. And why shouldnt they? Even though a cup competition isn’t the World Cup, you still want to win it.)

Good to see Mustafi getting game time for Germany. This might shape up to be a dependable defensive team. (Yeah, right…)

Joy for me as Arsenal Mustafi beats Arsenal Alexis.