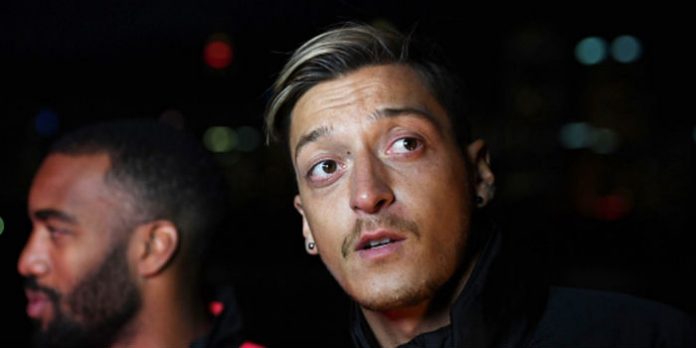 Mesut Ozil is yet to sign a new deal at Arsenal but he maintains that his preference is to stay at the Emirates.

The Germany international is still locked in negotiations over a significant wage increase but isn’t agitating for a move and hasn’t been seriously linked with any clubs at home or abroad.

“It is definitely my preference to stay. It is such a great club and I have always said that I feel very good at Arsenal.

“Once everyone is back in London we will sit down and discuss about the future.

“For now the most important thing is our pre-season and getting through the tour, training and getting fitness. When I’m back in London, we will sit down and discuss.”

“I hope Alexis stays,” he told Sky Sports.  “I do not know what the status is to be perfectly honest, but I value him a lot as a player and he is very well suited to the game Arsenal play.

“So from a personal view I would really appreciate it if he stays. However, it’s the player’s decision after all.

“It would hit the team quite hard if he left because he is a player who always delivers. It would be a setback to winning the title but in the end it is a player’s decision.”

Good lad. Get it signed!

Legends or mercenaries, their choice.

Let’s be honest, if they dont win the league, you are not gonna consider them legends anyway.

I will. Both won FA Cups in their first season, World Cup and Copa de Rey winners, two of our most expensive and best players. Agreed I’d prefer a league win but still rate them v highly.

If you disagree, change the above to ‘Potential legends or mercenaries, their choice.’

Liam Brady not a legend then

Exactly right. He may not have won the league with us, but for my generation he was the most sumptuous, skillful and intelligent player to grace that beautiful, compact, green Highbury pitch. I still love him. We have since had Bergkamp, Cesc, (briefly Wilshere – I still have some, probably misguided hopes for him) and Ozil as that sort of player that seem to be on another level to those around them, but Brady is right up there with all of them.

He’s happy here (ozil), I say increase his wages.
With Sanchez situation, lets do what we can to keep the lad. If alexis wants a move we keep him to the end of his contract. An if the ox doesn’t wanna extend the contract sell him and replace with Lemar. None of the big teams r selling their stars especially to direct rivals. We should keep the same squad and

”Eager” yet takes a bazillion years to sign the paper.

He wants to negotiate the best deal for himself possible while staying at Arsenal. Not everybody is Tony Adams.

I’m fairly sure Tony Adams had a clause in his contract to consistently be the highest earner at the club, thus any new signings or renegotiation’s with other players meant he got a pay rise.

Artro
Any reference or evidence to your claim?

i’m not much informed but according to tony adams the salary offered to him in his latter years were actually low and wenger always only extended his contract to just one year only just like what he did with bergamp and other senior players.

best deal? he’s not exactly making minimum wage, is he? best deal, more like trying to squeeze out every cent of the club until he’s happy.

I think it was mainly attributed to Wenger’s silence on whether he was leaving or not. But still – our handling of contracts has been a shambles.

Get the statue started lads

I really have a good feeling about this transfer window…..someone please pinch me

Only because you asked for it!

Happy Ozil’s staying. I’d be glad for Alexis to sign, but he needs to change his attitude and stop acting like a dick toward his teammates. Seriously disgusts me.

Yeah, he should stop getting annoyed when they don’t give a 100%

Or how about just when someone makes a mistake or doesn’t read his mind and do exactly what he wanted them to. Maybe don’t throw a fit on the pitch. That’d be cool

I love alexis as much as the next fan, but I remember a game toward the end of last season when his through ball didn’t find a Monreal (i think?). Instead of tracking back he went into a bit of a strop that his team mates weren’t on the same wavelength and it allowed the other team an easy counter attack. What I found most frustrating about it was that the commentators actually praised him for it. And then a minute later when Ozil was a tiny bit late in getting back they spouted their usual rubbish about him being… Read more »

All the pundits are shite save a few. It’s hard to ignore.

A few….. I can’t think of one that I’d trust consistently. There’s a few worth listening to but even then they can spout shite.

True. Lee Dixon’s pretty good on NBC. I don’t see much of Ian Wright but he seems decent. NBC should trade him for David Platt + 20 mill or something

Not everyone can be Michael Owen or Robbie Savage you know.

Anyone can strap a large, rubber penis to their forehead and most people would then think they were Michael Owen or Robbie Savage…

I Didn\'t See It
Reply to  Dan Hunter

He’s not exactly perfect. Gives the ball away. A lot!

You talking about Alexis? Not Ozil, surely?

I’d take 11 players with his attitude any day of the week. Passion, aggression and dominance! Its all part of the package, goes hand in hand with his workrate, the way he chases the ball if he loses it demonstrates high expectations of himself not just team mates. It’s an asset, something we need more of!

That should probably be “the way he chases the ball if he loses it and he feels it’s his mistake” because there’s plenty of times he doesn’t chase after it when he gives it away as well.

11 players like him will cost you £3.3 million in wages every week.

Agreed, Alexis’s body language during our losing streak was dreadful. Even if you run around like a dervish you need to do it as part of a team. He didn’t. Any decent striker should score 30 for Arsenal. Walcott got 19 as a bit player last season. Now we have Lacazette, Alexis will need to be less selfish, which he’ll find hard, so I would not at all be sorry of we sell Sanchez for a top price.

Yeah hi, it’s Bill Lumbergh, if you could just go ahead and sign that contract that would be great.

Highly underrated comment here, made me crack up at work … at my desk job lol.

“Yeah Mesut I’m going to have to go ahead and ask you to stay late and I want those TPS reports on my desk first thing tomorrow.

“in the end it is a player’s decision.”

No it isn’t! Alexis is under contract and the decision is ours. I’m hearing all the right things about keeping Alexis. I’m hoping it’s all true. Of course, because I’m an Arsenal fan and this ain’t my first window rodeo, I’m fearing a deadline day sale to those northern blue cunts.

Absolutely delighted the Wizard of Ozil is staying though.

In fairness, I think he meant it’s the player’s decision to sign a new deal rather than looking out his contract.

I think Ozil was just saying that Alexis signing a new contract is his choice.
Where Alexis plays next season is 100% the clubs choice.

I know 3-4-3 is working well but i cant help think that the 4-2-3-1 we had ar the beginning of last season maybe the best for out squad and i think its Wenger and Ozil’s dream to have Ozil playmaking and providing dreamy passes for our 3 skilful speed merchants – Alexis, Lacazette and Theo (Yes I know he’s not that popular but think of the speed and the combinations)

To field that front four, we need a stronger central midfield pairing (both with and especially without the ball) behind them (would still prefer someone other than Theo anyway, mind).

I’m not even certain we should play four at the back and two in midfield. I like the width we get from wingbacks who can get further forward knowing that there is an additional centre back covering them.

That could work well were it not for Wengers very offensive fullbacks that leave the defense way too exposed.

Talk is cheap. If you’re so eager sign the contract.

Our most important player. An Özil on fire can win us anything.

Excellent, fuck the haters Ozil. Anyone with half a football brain knows that the English media unfairly vilify technical gifted players who don’t ‘track back’, and anyone with a full one knows that Mesut isn’t the kind of player to win games by himself, and that he’s only as brilliant or as poor as what he has to work with (unlike Alexis)

Love this guy and hope he stays with us for the rest of his career.

Ozil feeding Lacazette could be huge with Lacazette’s mobility and scoring touch.

Ozil please stay at arsenal. We love you and will always

This is very encouraging. Ozil signing is so important for the coming season. He’s a terrific talent that isn’t easy to replace. Hopefully the negotiations go well and we can hang on to him for another four years.

It also sends a message to Alexis: I’m invested, you should get on board too.

A happy relaxed Özil is a productive Özil. I hope he signs up in good time and convinces Alexis to stick around

Sounds confirm Ozil we re-sign. Pressure being put on Alexis as well if not already by the BFG.

As Wenger said, it is not necessarily that Alexis is in his last year of contract as so readily assumed by the facile press. He may extend as well.

But Likely if there are entrants into the market for him like PSG or Inter, he may be sold and we will invest in Lemar or Mahrez to add to Lacazette.

He’s “eager” to stay because nobody other than Fenerbache want to buy him.

Would be pleased to see Ozil stay. He’s untouchable when on form. Perhaps a performance based clause to meet his demands might see him sustain it all season? Looking forward to him playing behind Lacazette. If Alexis stays too I think we’ll do alright. It’s funny we’re being linked with so many forwards but for me an additional central midfielder is what we need. One who works in more than one combination so it doesn’t unbalance the team when someone gets injured. I felt that was our main problem last season, the lack of fluency when we lost Cazorla to… Read more »

Not sure if it’s just contract talk, I am liking Mesut’s approach to this still.

I hope he stays with us at least for another 4-5 years and gets rewarded with the whole lot of prizes! Come on Öz, stay loyal man! COYG!!!

Ozil is eager to stay after waiting to see if any other club comes in for him. In the absence of a big club – or any any club for that matter – showing an interest, he’s realised we’re his only option. I hope the Club don’t give in to his ridiculous demands and pay over the top for someone who goes missing a lot if he doesn’t feel like it.